Proposal may face resistance in House 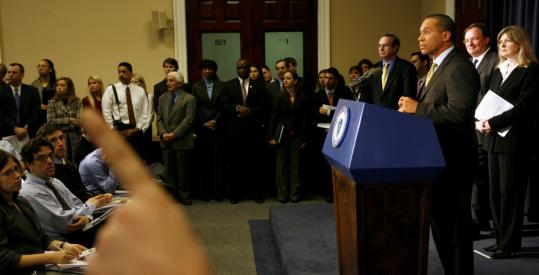 Governor Deval Patrick filed a $28.2 billion budget yesterday that avoids major cuts while directly challenging the Legislature to adopt his most controversial ideas for raising new money. His proposal sets up the possibility of a lengthy debate that will further test his strained relationship with the House leadership.

To plug a $1.3 billion budget gap created mostly by rising healthcare costs and declining revenues, the governor has tied together a patchwork of proposals. His budget relies heavily on politically contentious plans to raise $124 million in casino licensing money and $297 million by tightening what he calls corporate tax loopholes, proposals that fared poorly on Beacon Hill last year.

In a budget that increases 5 percent over this year, the governor also wants to use $370 million from the state's rainy day fund and would raise $166 million by increasing enforcement on tobacco taxes and increasing penalties on tax delinquents.

The plan highlights the governor's priorities as he enters his second year in office, but he is facing hurdles like those he dealt with last year. Patrick, who was elected on a platform of making broad changes, has faced fiscal constraints that have made it difficult to achieve the ambitious agenda that helped gain his 2006 campaign victory.

"Sometime around here, we are going to have to focus on the cost of inaction," Patrick said yesterday, his voice showing exasperation after taking questions on the political struggles his budget faces. "Let's get on with it."

Over the next several months, the House will debate the fiscal 2009 budget. The Senate will follow House deliberations, and then there will be compromises among the different plans before the budget takes effect July 1.

"We have put our ideas on the table," Patrick said. "It takes three of us to do this tango, and we look forward to dancing this tango with the Legislature in the months to come."

Local officials hailed the budget proposal for providing much-needed revenue for education and public safety. But amid the worst fiscal crisis the state has seen in at least five years - and with increasingly ominous warning signs in the national economy - budget observers say it may be unwise to focus on new revenue sources like casinos and bigger corporate tax collections that may not be adopted in time for the next fiscal year.

"The governor has every right to propose ideas, but he does have to make sure the Legislature has enough information and time to make a wise decision," said Noah Berger, executive director of the Massachusetts Budget and Policy Center.

The Legislature has yet to pass Patrick's plan to license three casinos across the state, which he says would generate hundreds of millions of dollars in up-front licensing fees and then annual revenues as a share of gaming proceeds. It also has balked at his proposal to tighten corporate tax rules to prevent businesses from declaring profits out of state and filing state and federal taxes using different filing status, two common corporate tax maneuvers.

Nonetheless, Patrick included money from both plans in his budget, leaving lawmakers with the tough choices of either agreeing with policy initiatives they have previously been reluctant to adopt or finding their own new sources of revenue or making substantial cuts.

"There's a political negotiation going on here," said Stephen P. Crosby, dean of McCormack Graduate School at the University of Massachusetts at Boston. "The administration is learning how to use the budget as a negotiating tool and saying to everyone else, 'It's put up or shut up time.' "

The $370 million Patrick proposes using from the state's rainy day fund is about half the $780 million the state used from the fund this fiscal year. The fund would still have about $1.9 billion.

Republicans in the Legislature were quick to criticize Patrick's plan as failing to make enough hard choices.

Democratic House leaders would not discuss details of the governor's proposal, but House Speaker Salvatore F. DiMasi and Robert A. DeLeo, chairman of the House Ways and Means Committee, issued a joint statement that raised a warning about the current fiscal climate and whether the state can afford the governor's plans.

"Recent news from Wall Street and fears of a serious, national recession tell us we must tighten our belts, restrain spending and, very likely, make painful cuts," the statement said. "We must be concerned about placing additional new burdens on our taxpayers and businesses amid this economic uncertainty."

Senate leaders, who have been more supportive of the governor's revenue proposals, applauded the move.

"I don't fault him for bringing up these issues; these are our options," said Senator Steven C. Panagiotakos, chairman of the Ways and Means Committee. "Quite frankly, I feel like these two issues should be on the table for debate."

Perhaps the most controversial aspect of the budget is the governor's proposal to include money from auctioning three casino licenses, which Patrick estimates would bring in about $800 million. Expecting declining projections in lottery revenues, lifeblood for municipal budgets, Patrick wants to fill the gap by immediately using a portion of casino licensing revenues.

About $935 million in lottery revenues will be distributed this year to cities and towns. Next year, funds from the lottery are projected to decline to $811 million. Patrick wants to use an initial infusion of $124 million in casino money to make up the difference. With another infusion of casino money that the administration is not including as part of the budget, he would also distribute $88 million in casino revenue for property tax relief and $88 million to allow communities to fund transportation projects.

Administration officials said they would use the remaining $500 million from licensing fees over fiscal 2010, 2011, and 2012 until casinos opened and slot machine proceeds started coming in.

Opponents argue that his plan is excessively speculative. DeLeo, who has supported expanded gaming in the past, said in a recent interview that he would refrain from putting them in his proposal.

"I wouldn't intend to include it as part of my facts and figures," he said. "It's wrong, and I'd be relying on money that I don't have. You just can't do that."

Administration officials defended the move, and said that if legislators disagreed, they should come up with an alternative.

"We don't think [the revenue generators] are speculative," said Leslie Kirwan, secretary of administration and finance. "They're real revenues that we could see enacted and available for the fiscal '09 budget."