For toilet museum, a final flush is avoided 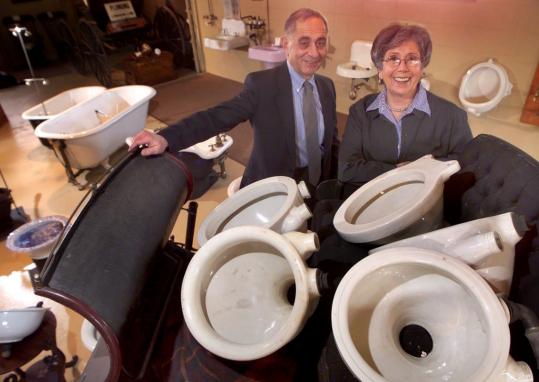 WORCESTER - If there was ever a man who could appreciate a good toilet, it is Russell Manoog.

He has dedicated the last 20 years to collecting toilets, as well as sinks and other accoutrements of indoor plumbing, the way other men collect golf shirts, trophy wives, or fine cars.

The result is the American Sanitary Plumbing Museum, a roadside oddity in Worcester known to many as simply the "toilet museum" and a historic showcase of the way we used to live, wash, bathe, and, of course, relieve ourselves.

But now - for Worcester, anyway - it's all circling the drain. With Manoog, 73, and his wife, Bettejane, 72, looking to do a little more traveling and a little less talking about toilets, they are closing their Worcester location in March, moving the museum to Watertown shortly thereafter, and relinquishing some control over their vast collection of porcelain, brass, and cast-iron artifacts.

But the Manoogs didn't expect others to be sad, too. After all, only about 400 people checked out the facilities last year. As news of the move reached locals in Worcester yesterday, however, they scram bled to visit the museum, proving yet again the powerful hold that the toilet has on the human brain. When faced with the thought of not having a toilet - or in this case, a toilet museum - nearby, we find ourselves feeling the urge to, you know, go.

"Bathrooms were something that people didn't talk about 100 or 200 years ago," said Russell Manoog yesterday, smoking a pipe in a room filled with toilets. "The outhouse was out there, and it was there to serve a need, a physical need.

But today the bathroom in modern homes is probably the most, or second most, expensive part of your home. So instead of hiding it in the back of the house, it's right in front. . . . It has gained a prominence."

Charles Manoog, Russell's father, founded the family's wholesale plumbing supply business in 1927. His son, who graduated from Harvard University in 1956, ultimately returned home to join him. And together they ran the business until his father retired in 1979.

As a parting gift, Charles Manoog received a segment of wooden pipes that had linked Jamaica Pond to Quincy Market in Boston in the late 1600s - a rare treasure. And from there, the collection grew until finally, in 1988, the American Sanitary Plumbing Museum was born, quickly becoming a quirky claim to fame in Worcester, along with the yellow "smiley face" invented in 1963 by a local designer.

Now it is all bound for Watertown, where it will be reassembled and reopened for the public in April or May at the offices of J.C. Cannistraro LLC, a large mechanical contracting company that employs 400 people.

But Kelleher, who's going to be a trustee of the new museum along with the Manoogs, said people need to remember one thing before cracking jokes about indoor plumbing.

"If those systems go down, civilization rapidly deteriorates," he said. "The day water stops coming out of the tap is the day civilization starts to crumble."