After 13 years, sightings reported near and wide 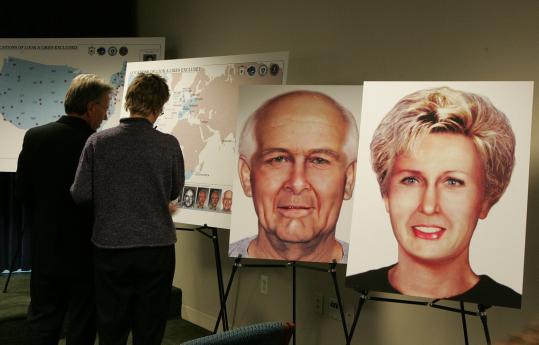 Renderings of what James Bulger and Catherine Greig might have looked like about 10 years after disappearing from Boston were displayed by the task force assigned to track the gangster. (THE BOSTON GLOBE/FILE)
Email|Print| Text size – + By Shelley Murphy Globe Staff / January 5, 2008

As South Boston gangster James "Whitey" Bulger's 13th year on the run was marked yesterday, an FBI agent said investigators suspect he could be hiding in Europe because of a possible sighting in Sicily last year.

"We're going to continue our focus on Europe," said FBI Special Agent Richard Teahan, coordinator of the multiagency Bulger Task Force that is conducting an international manhunt for the 78-year-old fugitive.

In the past year, Teahan said, the hunt for Bulger has taken the task force to Italy and the cities of Madrid, London, and Belfast. And while the focus has primarily been overseas, Teahan said investigators have also chased leads in Chicago, Florida, and other parts of the United States in the past year.

"We get so many look-alikes it's unbelievable," Teahan said. "It's a regular occurrence for us, based on the fact he resembles everybody."

The agent said it is possible that Bulger has maintained contact with family or friends in the Boston area, but investigators do not believe he has to rely on anybody to survive on the run.

"I think he has the resources to break all contact, that he'd be OK with that, and that he has the financial network, the financial wherewithal to be a fugitive and not rely on anybody," Teahan said. "I think he was smart enough to set up accounts and safe deposit boxes in locations that we have yet to determine and are worldwide."

Bulger, a longtime FBI informant, was warned to flee by his former handler, retired FBI agent John J. Connolly Jr., days before a warrant was issued on Jan. 4, 1995, for his arrest on federal racketeering and extortion charges. After Bulger fled, investigators uncovered hidden graves containing the bodies of some of his alleged victims, and he is now charged with 19 murders.

The last confirmed sighting of Bulger was in September 2002, when he was spotted strolling down a street near Piccadilly Circus in London, the FBI said.

Teahan said the task force has chased hundreds of leads since September, when the FBI posted a video clip on its website of a couple resembling Bulger and his girlfriend, Catherine Greig, 56, and sought the public's help in identifying and locating them. The video, shot by a vacationing federal Drug Enforcement Administration agent who did not confront the pair, shows the couple walking through a shopping area in the resort of Taormina, Sicily, in April.

There was a media blitz across Europe, and Italian police detained a number of elderly Americans who have been mistaken for Bulger. Still, Teahan said, investigators have not identified the couple in the video, and the investigation is ongoing.

Many of Bulger's closest former associates, including his former girlfriend, say they do not believe the couple spotted in Sicily were Bulger and Greig. But Teahan said: "We're really not focused on opinions. We're focused on the identification of this couple."

Teahan said there are "enough similarities" between Bulger and Greig and the couple seen in Sicily to warrant the ongoing efforts.

He said the task force, which is made up of two state troopers, two Department of Correction officers, two FBI agents, and an analyst, is assigned full time to hunt for Bulger and has no plans to disband until he is apprehended.