THIS STORY HAS BEEN FORMATTED FOR EASY PRINTING
Suburban Diary

We're all extraordinary, her father showed her 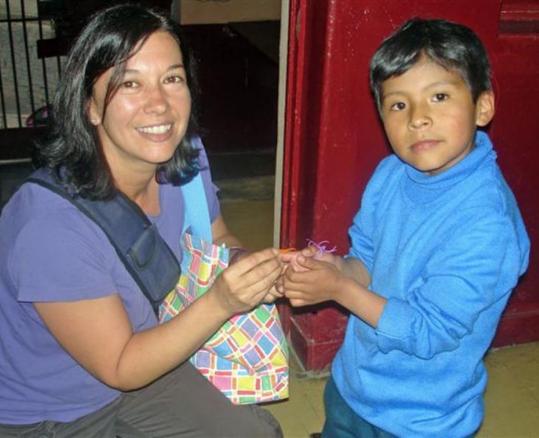 When Lonna Davis walked into the Santa Cecilia Center for the Blind in La Paz, Bolivia, in November, the residents stood and applauded.

Davis's father, the late Ansel "Sam" Davis, had worked so hard on behalf of the blind and disabled people of La Paz that two new classrooms at the center were dedicated to him. He died in 2006, so it was to honor her father that Davis, an Arlington resident, made this trek of nearly 5,000 miles.

"I had to see [the classrooms] with my own eyes, and try to represent my father and my family," she said recently. "It was very emotional. People were crying. I was crying. And yet there was a lot of laughing, too. They were so grateful and so happy there."

Ansel Davis, a sales executive and longtime Lexington resident, had traveled to La Paz in 2003 with the humanitarian aid group Airline , or AAI. In this city of 1 million situated more than 2 miles high in the Andes, life can be difficult.

"I found an essay my father had written about his trip when I was cleaning out his computer," said Davis, 44. "He described the poverty, street life, the children. He wrote about how he wished he could have done more."

And he did. Ansel Davis, together with the Lexington Lions Club, sent 1,500 pairs of eyeglasses and 800 pairs of shoes to the children of La Paz over the years.

"Sam could always be counted on to collect donations, help with transport, or lend a hand in any way he could," said Paula Moran, AAI's coordinator for Bolivia. "When he passed away, I wanted to do something in his name. I know his visit to the Blind Center had a real effect on him, so it seemed right to remember him there."

The classrooms opened last year. A plaque cemented into the wall of the building reads: "In memory of Ansel Sam Davis."

The center's director, David Espejo Tuco, told Davis during her visit, "Your father lives with us now, and we're proud he lives here with us."

"My father was very private," she said later. "He never wanted to take credit. But I think if he saw this, he'd be blown away."

Lonna Davis, too, made her trip to La Paz with AAI. For six days, she followed in his footsteps, traveling with five other volunteers (including this writer). She delivered supplies to destitute children who support themselves shining shoes, work considered so lowly that many hide their faces with ski masks. She visited remote villages to distribute wheelchairs and crutches to the local Aymara Indians, and brought toys to children in the city's only women's shelter.

Davis, who works in Boston as director of children's programs for the Family Violence Prevention Fund, said she felt her strongest connection at the women's shelter.

Instinctively, she was making the same strong connections in La Paz her father had. "Many people knew my father as a man who fell in love with the people of Bolivia," she said. "Now I can see why."

But Davis took something else home after seeing what her father had accomplished.

"To me the whole thing was an example of how we are all ordinary people, but we're all extraordinary, too. The good things we do day to day hardly ever get noticed. We should notice them more."

For information about AAI's work in La Paz, go to airlineamb.org.

Lesley Bannatyne can be reached at bannatyn@fas.harvard.edu.