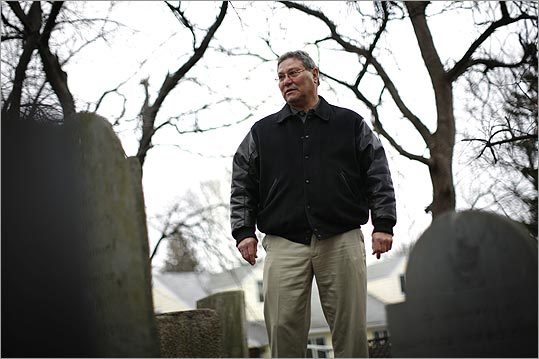 When most people consider Revere's historical treasures, they might think first of Revere Beach and its pride in being "America's first public beach."

But few are aware that Revere's only burial ground, listed in the National Register of Historic Places, is more than 300 years old and is the final resting place of its early residents and war veterans.

Last Memorial Day, Nicholas Bua, the city's director of Veteran Services, and City Councilor Ira Novoselsky walked among the cracked, broken, and toppled headstones, making their way past the large trees with overgrown roots to place American flags on the graves of Revolutionary War and Civil War veterans.

They were appalled at what they saw.

"I said to Ira, 'This is in deplorable condition,' " Bua said. "It's neglect. It's just out of the way, out of sight, out of mind. . . . It's heartbreaking to see these graves and the condition of the cemetery."

The city has not paid much attention to the Olde Rumney Marsh Burial Ground, which is in a residential neighborhood on Butler Street, Novoselsky said.

"All the city is doing is cutting the grass, but the trees are overgrown," Novoselsky said. "Everybody involved in it said it's a city thing, but it's not a top priority. I said, 'Well, we have to make it a top priority.' "

Bua and Novoselsky tapped Jeff Pearlman, a history buff and former Revere school teacher, and Nicholas Catinazzo, the city's public health director, to form a cemetery restoration committee about six months ago. They estimated it would cost about $100,000 for an entire makeover - removing overgrown trees, fixing the brick walkway, and repairing the stone wall and entrance gate, which is unhinged. The last time the grounds were restored was in 1975 by the Revere Historical and Cultural Commission, according to City Clerk John Henry.

The committee, along with the Revere Society for Cultural and Historic Preservation, has created a bank account to accept donations, and has been selling $5 commemorative pins to raise funds. The City Council has agreed to commit $15,000 a year for the next three years toward the restoration. But as soon as the council vote was taken, concerns arose about the feasibility of such a commitment, given a warning to Mayor Thomas G. Ambrosino from local lawmakers that the city might not get much local aid from the state in the next fiscal year.

"It would be my goal to put it in the budget, but next fiscal year is the one I'm most worried about now," Ambrosino said. "If we get the same amount in aid as we did this year, or less, it'll be a disaster. Layoffs would be likely."

City Councilor George Rotondo, who voted in favor of the $15,000 annual appropriation, said he is not optimistic that the city will come through.

"We're coming on the heels of what appears to me to be a deficit next year, so to commit $15,000 a year seems like a lot," Rotondo said. "I feel comfortable doing it for the first year, but after that, we need to look at private sources. I'm in favor of $15,000 for this year, but not after that."

Novoselsky said Ambrosino's "got to be able to finagle a bagel and work things out," because "$15,000 isn't a lot of money." Still, the restoration committee is preparing for a major fund-raising effort. It has secured a $5,000 grant from Shore Educational Collaborative for the production of a promotional film telling the history of the city's only cemetery.

"I hate to say it, and, as a historian, it makes me angry, there just aren't enough people that are knowledgeable that we even have the Rumney Marsh Burial Grounds," Pearlman said. "It's not just one of the first, but [it's] the only one within the confines of the city of Revere. The kids and parents have no idea. Revere Beach takes up all the attention."

From 1624 to 1738, the village of Rumney Marsh was part of Boston. In 1690, in the midst of a smallpox breakout, Boston selectmen ordered that "all persons dying at Rumney Marsh, and parts adjacent, of small-pox" be buried in that area instead of being carried south through Boston, creating a hazard to residents there, according to research done by Henry. It wasn't until 1743 that Chelsea adopted what would become the Rumney Marsh Burial Ground. In 1871, North Chelsea, which included the burial ground, adopted the name of Revere.

Many of the local Revolutionary War veterans and the city's first residents buried there have names familiar to most area residents, since many streets and neighborhoods in Chelsea, Revere, and Winthrop are named for them. Of the close to 150 people buried there, the most noted would be Deane Winthrop, son of John Winthrop, first governor of the Massachusetts Bay Colony. Also buried are seven Colonial Wars (1675-1763) veterans, 20 Revolutionary War veterans, four veterans of the War of 1812, and 13 Civil War veterans, according to research prepared by Henry. Along the Butler Street wall, an estimated 16 slaves and former slaves are buried.

The oldest gravestone in the burial ground marks the resting place of Mary Smith, who died in 1693, while the latest burial was that of Lewis L. Bullard in 1929. According to Henry's research, Rumney Marsh is the fourth-oldest burial ground in Suffolk County, which is why Catinazzo said the city needs to preserve it as local history.

"Kids go in there at night, drinking, doing some vandalism," Catinazzo said. "We want to see it done right. It's amazing when you put this out, people just think it's a cemetery, but when they see the history, they get excited."

Pearlman said the project is not about tourism dollars but about preserving the history of Revere for future generations. And, as for why the cemetery was neglected for so long, he said, "That's the $100,000 question."

Donations for the restoration of the burial ground may be sent to The Rumney Marsh Burial Ground Restoration Committee, in care of East Boston Savings Bank, 575 Broadway, Revere 02151.