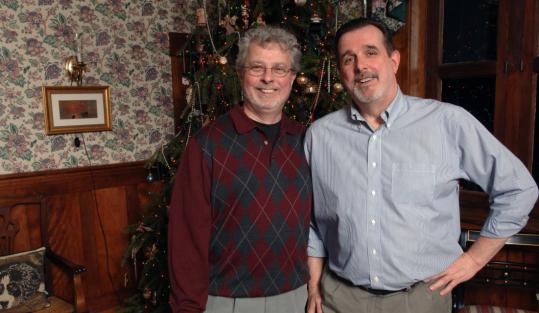 When gay marriage came to Massachusetts, throngs of people filled the streets in Cambridge, applauding the same-sex couples emerging from City Hall with their first-in-the-nation marriage licenses.

That is not exactly the plan in New Hampshire. A more subdued celebration is expected after the clock hits midnight tonight, when civil unions become legal in the Granite State. Twenty or so couples, who had to register beforehand, will gather outside the State House for ceremonies in which they will be united with their partners in a manageable, personable celebration.

"It's a much more scaled-down and smaller version, more intimate, meaningful," said Jen Major, who helped organize the event and will be united with her partner, Kelley Morris, that morning.

Of course, it was a major development when gay marriage came to Massachusetts nearly four years ago. In Cambridge, 227 gay couples applied to marry on the first night they had the opportunity, and 6,121 couples statewide wed that first year.

In all of New Hampshire, just 109 couples have registered their intentions to unite so far. Some of them may do so on New Year's Day at the South Church Unitarian Universalist Church in Portsmouth, where a family-friendly celebration is planned with a potluck lunch, songs, and worship scheduled, and ministers on hand for impromptu civil unions.

If both the hoopla and the backlash seem unnaturally muted for a state that was just the fourth in the nation to adopt civil unions, perhaps that has something to do with the psyche of New Hampshire residents. The libertarian-minded citizens of the "Live Free or Die" state simply cannot be bothered all that much about it.

"The biggest issue is that it's just not an issue," said Andrew E. Smith, director of the University of New Hampshire Survey Center, who pointed to the state's low lev els of church membership and ethnic groups that object to same-sex unions. Since 2003, he has been polling New Hampshire residents on the same question - whether they would support or oppose a law granting civil marriage licenses. A slight majority has supported it since, inching up from 54 percent in 2003 to 58 percent this year. And the issue has barely registered in the runup to the presidential primary in New Hampshire, where less than 1 percent cite gay marriage as the most important issue confronting candidates, said Smith.

New Hampshire voters might have been more vocal on the issue, Smith said, had civil unions been ordered by the court. In Massachusetts, gay marriage opponents long objected that they and their elected officials had no vote in the matter.

But Fergus Cullen, chairman of the state Republican party, said New Hampshire voters were not giving that mandate when they handed Democrats control of the House, Senate, and governor's office in 2006.

"This is not something that people expected when they got a Democratic Legislature here," he said. "This had not been a campaign issue here in 2006. Democrats found themselves with a majority unexpectedly and decided to use it."

New Hampshire was only the second state in the nation to allow civil unions without a court order but it trails its New England neighbors, where same-sex unions are becoming unremarkable. Vermont allowed them as far back as 2000. Connecticut became the first to do so without a court order in 2005. Rhode Island couples can marry in Massachusetts though their union is not recognized in their home state. (New Jersey also allows same-sex civil unions and California offers domestic partnerships, which become legal in Oregon on New Year's Day.)

Civil unions will give same-sex couples most of the same rights as heterosexual married couples - property rights, shared wills, and hospital visitations. To be united, participants must be 18, unrelated, unmarried, and not engaged in another civil union.

While gay couples are thrilled by the newfound recognition, the celebrations over New Hampshire's civil unions have been tempered by the fact that they are not quite marriages.

"It's a really complicated experience," said state Representative Edward Butler, a Democrat from Hart's Location planning his ceremony on his 30th anniversary in April. "We've had a 10th anniversary, [a] 25th anniversary party, but we've never had a celebration and a ceremony in the way that we will [with] a civil union ceremony. But it's not equality. It's not marriage. Even more important to us than the word is the reality of equality. It's still a significant distance from that."

Butler is a justice of the peace who will perform ceremonies for other gay couples beginning New Year's Eve with a ceremony at his inn, Notchland Inn. He and his partner, Les Schoof, were among the couples who sued Massachusetts for the right to marry here, though their union would not be legal at home. They lost that bid two years ago.

Now, New Hampshire will recognize gay couples married in Massachusetts, though only as civil unions. State Representative Maureen Mooney, a Merrimack Republican, has introduced a bill that would eliminate that recognition for out-of-state couples, but she is considering withdrawing it or changing the language.

"Let's face it, it's our law now," she said. "I have a feeling that Jan. 1 is going to come and we're going to proceed as we've always proceeded as a state - except there is a new job for the secretary of state now."