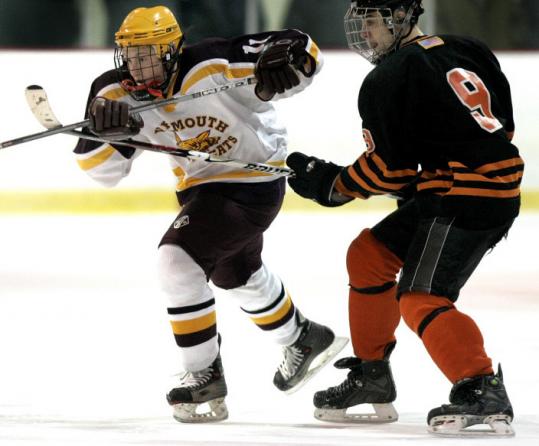 When Quincy residents complained that they smelled gas near their homes, no one took much notice. But when the smells were traced to areas with dying trees, it was clear to them that, as City Councilor Kevin Coughlin put it, "there's something going on here."

Just what is going on is a matter of disagreement.

Municipal officials in Quincy and other local communities fear that leaks in underground gas lines are killing trees - including shade trees that have stood for decades - by displacing oxygen in the soil.

But gas companies are reluctant to assume responsibility, stating that there is no proven connection between low-level leaks and the death of trees.

To Coughlin, the problem is not only clear but urgent.

"All of us ought to be concerned."

After noticing old trees dying on the comely residential streets of his district in Montclair and Wollaston, and reading about gas leaks in other communities, Coughlin contacted the Massachusetts Public Shade Tree Trust.

The trust - cofounded by lawyer Jan Schlichtmann of "A Civil Action" fame, and Robert Ackley, a gas line specialist - will, at a town's request, test for gas leaks near dead or dying trees. If leaks are found, the trust tries to negotiate a settlement with the utility company and make it pay the town for damages.

The trust is open, at no cost, to any community with natural gas lines. The trust's income is a share of any award it might win from a gas company.

Marshfield was the first town in the state to join, and gas leaks were pinpointed this year. Hingham, also a member, is in the process of having the trust survey its dying trees. Seven communities statewide have signed on with the trust so far, and more are expected to join.

Big shade trees have been lost for decades, Ackley said, and there is case law that clearly holds gas leaks responsible: In 1922, a Massachusetts court found that a gas company was liable for damages for trees harmed by gas leaks in Salem. In a similar case in 1927, another gas company was required to pay damages to the town of Spencer. Also, according to researcher Spencer Davis Jr., in 1961, a gas company paid damages to New York City for killing trees (the New York Telegram headline was "Trees apparently killed by natural gas.")

"The sad fact is a lot of the damage in the older areas has already been done," Ackley said.

He estimated that his survey will find 75 to 100 trees damaged by gas leaks in Hingham. In Marshfield, the damage is less evident, he said. The damaged trees are mostly on private property, since the gas company that covers Marshfield, Bay State Gas, fixed the leaks along the streets there, he said.

As Quincy considers whether to join the trust, Ackley agreed to do an informal "quick-and-dirty" tour of streets in Coughlin's district, such as Grandview Avenue on Wollaston Hill. There, Ackley identified a dozen gas leaks in a matter of minutes, Coughlin said.

The gas leak issue came to the fore this summer when the city began repaving streets. When roadwork trucks arrived on Grandview Avenue, Coughlin worried that if the gas company had not fixed the leaks Ackley had discovered there, it would need to dig the street up again after it had been resurfaced. Work came to a halt there until the leaks were fixed.

While some gas companies have acknowledged the existence of small leaks, they say there have been no studies showing that they definitively cause the demise of shade trees.

Tom Kiley of Northeast Gas Association, an industry group, said the trust has "not proved their thesis, that these small leaks are responsible for trees dying." He said a variety of environmental factors affect the health of trees - acid rain, salt from snow removal, insects, and disease.

"There are certainly no conclusive studies that show natural gas is killing the trees," Kiley said.

Despite Kiley's demurral, his organization's website cites dying vegetation as a clear sign of a gas leak. The Northeast Gas Association website includes the following as one of the ways to recognize a gas leak: "You may see a white cloud, mist, fog, bubbles in standing water, blowing dust, or vegetation that appears to be dead or dying for no apparent reason."

National Grid, which recently took over natural gas business, is aware that communities see natural gas as a cause of tree damage, said spokeswoman Deborah Drew, but "we are unaware of any credible evidence of widespread damage to trees linked to unattended natural gas leaks on our system."

In Hingham, parks supervisor John Bibby thinks the proof of the connection is found in the correlation between finding gas, rather than vital oxygen, in the soil near dead trees. "The machine measures what the oxygen level is around the tree," Bibby said. "It's almost foolproof."

Since the survey, he said, "the gas company has repaired many leaks in the town of Hingham."

An assessment formula is used in Hingham to determine the value of a tree, including size, condition, and location, and has made monetary claims after accidents damaged trees, Bibby said. A sizable shade tree would be valued at $5,000 to $18,000, according to the town's calculations.

Other estimates, including Ackley's, suggest much higher values for some trees - up to $100,000.

From a roadside in Brookline, where he was working recently, Ackley said gas company workers learned years ago to "look for dead grass, dying shrubs, and trees" to find low-level leaks. Now they use a machine called a combustible gas indicator, Ackley said, adding that he has more than two decades of experience testing gas lines for leaks. The machine is the same one he inserts into the ground to measure the presence of gas.

"The gas," Ackley said, "will replace the oxygen in the soil near the trees, dry the roots, weaken the tree," and allow other diseases and calamities - lost limbs, gashes, insect damages, and disease microbes - to help kill the tree.

Differences in the kinds of pipes used, and their maintenance over the years, affects the number of leaks, and the state of the trees in different areas.

Ackley said large numbers of leaks can be expected in Braintree, Cohasset, Hingham, Milton, Quincy, and Weymouth because of the kind of pipes and pressure systems used in those communities.