A reprieve for road banners 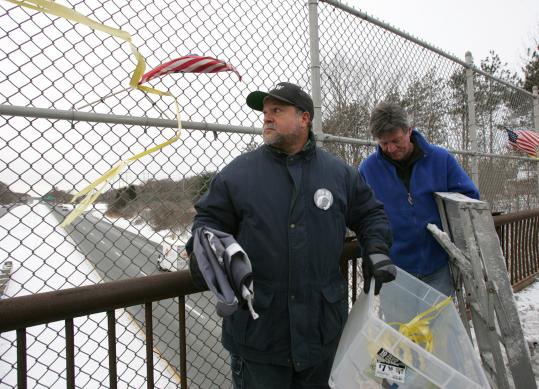 METHUEN - A plan by the state Highway Department to remove dozens of flags, banners, and other signs hanging over highways across the state was halted yesterday by Governor Deval Patrick, just hours after the father of a missing soldier somberly watched two flags removed from a bridge in Methuen.

According to a statement released late yesterday afternoon by the Executive Office of Transportation, MassHighway will not complete the removal of the displays until a task force identifies an appropriate and safe way to honor veterans on state-owned roads. Patrick, who is in China on a trade mission, directed Tom Kelley, the secretary of Veterans' Services, and Luisa Paiewonsky, the MassHighway commissioner, to convene a group of veterans representatives and highway safety officials to develop a plan.

Some veterans' families viewed yesterday's announcement as a victory. But James Wareing, a retired director at Malden Mills who has created several bridge displays in Massachusetts since the Sept. 11 terrorist attacks, called it "a desperate attempt at preventing a public relations nightmare."

"I don't see this as a reversal; they realized they made another mistake and now they are trying to do some damage control," said Wareing, who has spent an estimated $10,000 over the last six years hanging flags and banners throughout New England.

Last year, state highway officials ordered a similar removal of overhead displays, but after an outpouring of support for the flags and banners, they decided to allow them, provided the signs were positioned behind fences. In their latest decision, highway officials said even those must go because they could fall on drivers, causing a crash. They said that the earlier decision to allow them behind fences was just a temporary solution, while they worked on defining a long-term policy.

Yesterday, in bitter cold, Jimenez, from Lawrence, clutched an American flag and a black POW/MIA flag in his gloved hands as he stood on a bridge across Route 213. He looked down at the flags, as tears flowed down his cheeks and dropped to the snow-covered ground.

"I'm very happy they figured it out," Jimenez said later in the day, after the Patrick administration halted the removal of the displays. "I don't want anybody hurt, but I think the signs are safe."

Wareing had predicted earlier in the day that the state would reconsider.

"I think when they hear from all the supporters throughout the state, they will realize how important these messages are," he said.

In an earlier letter to Paiewonsky, Wareing said he understood the safety concerns about displays on overpasses, but said that "the risks are greatly over-exaggerated compared to other safety issues that MassHighway faces."

Other supporters of the banners and flags agreed with Wareing.

"I think we are more in danger of losing our lives driving through Boston's tunnels or getting hit by someone on a cellphone," said Gail Tuccero, 54, of Waltham, the mother of an Army corporal who spent 13 months in Iraq. "To me, this is another way of sweeping the war under the rug."

Wareing said he is unaware of any accidents on the state's highways caused by a falling flag or banner posted as a tribute to soldiers or Marines. Officials at the Executive Office of Transportation also could not identify any accidents caused by the displays.

Jimenez and Private Byron W. Fouty of Michigan were kidnapped May 12 when insurgents attacked a checkpoint in Baghdad. Another soldier, Private First Class Joseph Anzack Jr., was also captured but his body was found several days later floating in the Euphrates River. Four US soldiers and an Iraqi translator were killed in the ambush.

Ramon Jimenez said he was recently contacted by the Army and informed that an insurgent who may have information on his son's whereabouts was recently captured and is being interrogated.