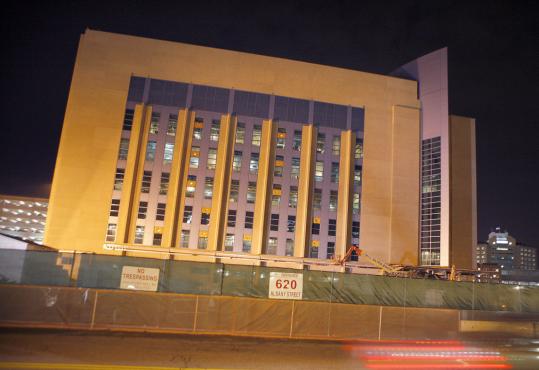 A federal review of a controversial laboratory being built by Boston University was "not sound and credible" and failed to adequately address the consequences of highly lethal germs escaping from the project, according to a blistering report released yesterday by an independent panel of scientists.

Authors of the report from the National Research Council said the federal analysis was so woefully incomplete that it did not meet basic standards applied to scientific research. If the federal review had been submitted for publication in a medical journal, "it would have failed," said Gary Smith, a report author and University of Pennsylvania epidemiologist. The scientists did not consider the safety of the lab, but simply the quality of the federal review.

Despite the pointed rebuke, the analysis presented yesterday at a Washington press conference does not have immediate implications for construction of the nearly $200 million Albany Street project that is 70 percent complete.

But lab opponents, who have waged a five-year battle on the streets and in the courts to block the facility, predicted that the new report could influence state Supreme Judicial Court justices and a federal judge who are weighing whether the facility can open.

"The judges now will look at us a little differently - this legitimizes what we've been saying," said Klare Allen, a leader of the community organizing group Safety Net. "They will hear this and keep that in mind when they're making their decision about whether the lab is safe to be in our community."

The lab building, scheduled to open in about a year on BU's medical school campus, has as its centerpiece a Biosafety Level-4 facility, designed to allow scientists to work with the world's deadliest germs, including Ebola, plague, and Marburg virus. The project, which is being underwritten by the federal government, includes lower-security labs as well, but it is the Level-4 lab that has raised neighbors' fears.

The new independent analysis looked at a safety review done in August by the National Institutes of Health, which concluded that the lab posed no danger to its South End neighborhood.

The director of the NIH, Dr. Elias A. Zerhouni, pledged in an interview yesterday that he would personally review the report from the National Research Council.

"I'm very concerned when the [National Research Council] says this - we have a great respect for them," Zerhouni said during an unrelated visit to Boston.

Mayor Thomas M. Menino, the lab's staunchest defender in the political realm, remained unflinching in his support, declaring that the facility is "too important not to go forward," because of its scientific mission and the jobs it will create.

BU won a hard-fought competition in 2003 to build one of two new high-security labs that are cornerstones in the Bush administration's campaign to prepare for potential acts of bioterrorism. Medical school administrators pursued the project, hoping it would vault BU into the top tier of scientific research and attract premier infectious disease specialists to hunt for vaccines and cures against emerging organisms.

The project received approval from city, state, and federal regulators, but generated increasingly fervent opposition from community groups in the South End and Roxbury, as well as from some scientists, who argued that human error could allow dangerous germs to be released. The community groups' cause was joined by a consortium of civil rights lawyers and the Conservation Law Foundation, an environmental group. The parties sued to block the lab in state and federal courts.

A Suffolk superior court judge in July 2006 rescinded the state's environmental approval of the lab and ordered BU to conduct a further safety review, but allowed construction to continue. Similarly, a federal judge declined to stop construction but left open the possibility of blocking the most dangerous kinds of research in the project.

The NIH reopened its environmental review of the lab as a result of issues raised in the federal case; BU said it would use that report to partially satisfy the state court's demands.

Knowing that BU was going to rely on the NIH report, Massachusetts environmental regulators decided to commission an independent review by the National Research Council, a body chartered by Congress.

In its analysis, the 11-member National Research Council's scientific panel expressed particular frustration with the NIH's evaluation of a worst-case scenario for the release of deadly organisms into the South End.

Specifically, the scientists complained that the federal agency had studied the wrong scenarios, looking at germs such as Ebola that can't be transmitted easily, rather than dengue fever, which would pose more of a threat because it is carried by mosquitoes.

The National Research Council also said that as the NIH weighed the risks of a germ escape, it should have considered health problems already endemic to the South End. The neighborhood, which has a substantial number of low-income residents, has a high burden of diseases such as AIDS that leave people more susceptible to germs.

"The committee was dissatisfied with the depth of exploration of such issues," the report said.

Eloise P. Lawrence, a Conservation Law Foundation lawyer, said the report showed that elected officials were not standing on solid ground when they said that the lab would not imperil the health of the South End.

BU released a two-sentence statement promising to "stand ready to provide whatever information we can in order to respond to questions and concerns."

Zerhouni said that as his agency completes the final version of its safety assessment, it will consider the National Research Council's report.

"We cannot go forward without ensuring everybody - public, scientists who work there, ourselves - that in fact what we're proposing to do and what Boston University is doing is completely safe," he said. "I will leave no stone unturned."