Scholar sees a Catholic in the Bard 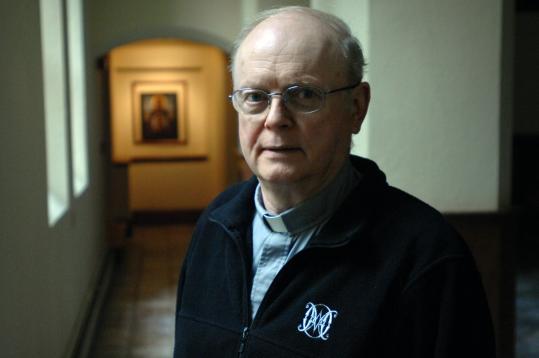 The Rev. David Beauregard is a Roman Catholic priest who teaches Shakespeare at the St. Clement seminary and is the author of "Catholic Theology in Shakespeare's Plays." (JOSH REYNOLDS FOR THE BOSTON GLOBE)
Email|Print| Text size – + By Rich Barlow November 24, 2007

A clue, a clue, my kingdom for a clue.

With apologies to William Shakespeare, that line sums up the plea of scholars who for years have tried to untangle one of literary history's most nettlesome knots: To which church did the Bard belong?

Was he Roman Catholic, the religion of his mother's family, many of his schoolteachers, and perhaps the closet faith of his father? Was he Protestant, a version of which was the official religion of Elizabethan England, where he crafted works that rival the Bible for fame and citation? Or was he an ecumenist ahead of his time, one whose views transcended the fanatical religious debates of his day?

The Rev. David Beauregard, a Roman Catholic priest who teaches Shakespeare at the seminary of St. Clement Eucharistic Shrine in the Back Bay, argues in his new book, "Catholic Theology in Shakespeare's Plays" (University of Delaware Press), that Shakespeare was Catholic.

"My case isn't based on documentary evidence," Beauregard acknowledged in a recent interview. Religion back then was a matter of don't ask don't tell. The Church of England was the state denomination; what devout Catholics thought and did privately was their business, but Elizabeth I demanded public fealty to the church she headed and was prepared to punish, even brutalize dissidents. In 1581, she made a martyr out of Jesuit priest Edmund Campion.

Biographical detail of any kind about Shakespeare is scant, but a now-lost Catholic document found in the 18th century suggested that Shakespeare's father, John, was a loyal Catholic, and an Anglican clergyman, the 17th-century cleric Richard Davies, wrote that the great playwright "died a Papist."

With Shakespeare's life shrouded in murkiness, scholars must probe the sprawling thicket of his writing for evidence of his religious views. A chat with Beauregard to sample a few bits of his research is to beam back to high school or college English classes.

He'll remind you that in "Hamlet," the ghost of Hamlet's murdered father tells his son that he is in purgatory, a Catholic concept. Or that an earlier play, "King John," portrays its titular character, who feuded with the pope and, said Beauregard, was a hero to Protestants, as an evil tyrant who dies violently. True, there are antipapal lines in the play, one of several examples in Shakespearean works in which he mocks Catholic figures. But Beauregard said the diatribes are in keeping with John's character, as a rebel against Rome.

Isabella, a novice nun in "Measure for Measure," is a model of virtue, a break with Protestant dramatists who depicted Catholic religious as sinners, said Beauregard. (It's telling, he adds, that Shakespeare made Isabella a novice; an earlier play on which "Measure for Measure" was partly based portrayed Isabella as a secular woman.) In "All's Well That Ends Well," Helena cures the sick king, attributing her success to "inspired merit" - "a very Catholic phrase," Beauregard said.

And Prospero, bidding the audience farewell in the epilogue of "The Tempest," said, "And my ending is despair/Unless I be reliev'd by prayer."

"The Protestant doctrine was the doctrine of 'assurance' - if you have faith, you have nothing to be afraid of" and don't need prayer, said Beauregard. "Intercessory prayer is not what Protestants undertook."

Might a non-Catholic have incorporated these elements as dramatic devices? After all, Bram Stoker didn't have to believe in vampires to create Dracula. But the preponderance of such elements convinces Beauregard they're more than mere storytelling aids.

They don't convince Stephen Greenblatt, professor of Renaissance literature at Harvard, a Shakespeare scholar, and an author of several books on the Bard. In an e-mail, Greenblatt notes Shakespeare's family and its Catholic ties, but said: "I think throughout his life, he drew upon this experience of the outlawed faith. He was, in this and in other ways, a specialist at recycling damaged or discarded institutional goods. But I do not myself believe that the adult Shakespeare was a pious Catholic or Protestant."

Greenblatt culls a bit of evidence from another classic of the canon: "When old, mad King Lear howls up to the heavens, the heavens remain conspicuously silent."

At the end of the day, does it matter? Beauregard thinks so. Nuances of interpretation hang on how you read Shakespeare's theology, he said.

But he acknowledges that what mesmerizes him about the writings isn't theology but Shakespeare's exquisite style with words, and there the priest detects a spark of the divine.

"If I wrote three lines from Shakespeare, I'd consider my entire lifetime to be a success. He's ripping this stuff off [at a rate of] two plays a year. It's the same with Mozart," he said. "These guys are superhuman. They're inspired by a supernatural gift, I think."

Comments, questions, and story ideas may be sent to spiritual@globe.com.