Uprooted for a while, residents glad to return to old routines 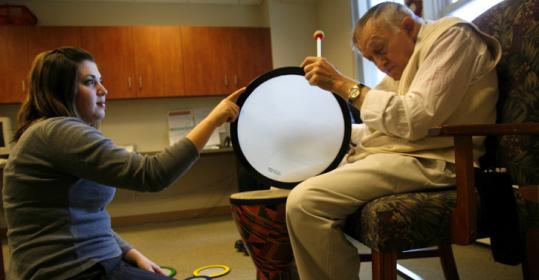 DANVERS - Six friends watch "Fort ," a western filmed in black and white, with subtitles added. Others play dominoes or Four Kings, a card game. Pictionary, played on a whiteboard with a marker, draws a half-dozen more, their hands fluttering in sign language.

Fun and friendship has returned to the New England Homes for the Deaf, a nursing home/assisted living center for elderly people who are deaf or deaf and blind. The nonprofit's new $8 million building was severely damaged last November, when a factory blew up across the Waters River. Damages totaled more than $1 million.

Most of the 60 residents stayed in a wing of a Beverly nursing home while their home was repaired. They returned on Jan. 22.

The Nov. 22 blast, which occurred at 2:46 a.m., shook Morris and other residents from their sleep. "Oh, my God," Morris said, placing her hand on her chest. "It scared me so much."

Residents now are focused on group activities, such as card making or a new drumming class. Social time to play a game, or watch a movie together, is popular.

"Old movies are the best," said Barbara Samia, 70, who moved to the home in April from a traditional nursing home. She took in "Fort Apache," made in 1948 and starring John Wayne, after making a pop-up card for Thanksgiving. "One is for me. One for my family."

Barry Zeltzer, the executive director, isn't surprised residents resettled quickly. "They're a strong group of people," Zeltzer said. "They're used to being able to adapt to many different environments. . . . They were able to come right back, and get right back into their home."

A relief fund netted $400,000 in contributions. Donations ranged from big checks from local banks to pennies collected by Danvers school children. Money was used to replace residents' personal items ruined in the blast, such as televisions and furniture. Volunteers, such as an art therapist, helped residents resettle.

On Thanksgiving Day, residents and their families will gather for a holiday dinner.