THIS STORY HAS BEEN FORMATTED FOR EASY PRINTING
Cambridge

Best of the worst featured in tribute 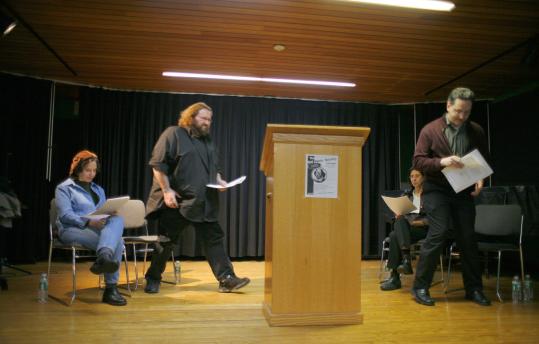 So much bad poetry, so little time.

For six months, Jon Haber and John Galligan collected examples. "The original file for 2007 was about this thick," said Galligan, holding his thumb and index finger 3 inches apart.

From that cornucopia of ineptitude, the two men culled 38 poems to be read by four actors at the seventh, "sometimes annual" gathering of the Bad Poets Society. In Haber's words, the event brings together "a great lineup of readers and, hopefully, a really crappy lineup of poetry."

This year's comedic tribute to the art, or lack thereof, of writing verse took place in a dim room in the Blacksmith House in Harvard Square on a chilly Friday night. Ears perked, 40-odd people sat in front of a small stage. A woman with a jaunty beret stood at the podium, reading a poem.

The tittering began with the first batch of poems, grouped under the heading "Teen Angst" and read in quick succession.

"You're a back-stabber, that's just what you are," started one.

"I'm being sucked into a black hole of teenage reality," another intoned.

The audience started to guffaw when Gene Doucette read "The Ballad of Bilbo Baggins," originally a song that Leonard Nimoy performed on a variety show in 1967.

"With his long wooden pipe, fuzzy woolly toes, he lives in a hobbit hole and everybody knows . . . him," Doucette read, pausing briefly as the awkward break in rhythm sank in.

And by the time Sarah Bazydola was halfway through an homage to Oprah Winfrey, she had to step back from the podium to wait for the audience's roars of laughter to subside and to regain her own composure:

Galligan and Haber are cocurators of Channel Zero, which collects and screens lesser-known films and television programs. In 1996, after a screening of the 1968 "Custer" television series at the Liberty Cafe, the duo read a few poorly written poems to the crowd, and the Bad Poets Society was born.

At the latest event, the poetry covered the works of anonymous poets, songwriters, and what Galligan calls "legacy bad poets," such as William McGonagall (1825-1902) and Edgar Guest (1881-1959), whose dismal abilities improved little despite a lifetime devoted to the craft.

The common denominator is the potential for humor, Doucette noted, and the laughter that comes from reading the poetry aloud is contagious.

All four performers approached their poems with a similar aim - to read the pieces, as best they could guess, in the manner that they were intended.

"A naive reading is almost always best," Colin Buckley said. "I try to keep the winking to a minimum and to hoist these authors by their own petard."

Buckley thumped the podium and repeatedly tossed his hair over his shoulders as he strove to capture the excitement of Jose Nuñez's "'Twas the Night Before Potter."

Flinging his arm in the air with the gusto of a Shakespearean actor, Buckley recounted the mailman's approach: "I listened for the doorbell, I waited for it to ring, So I could throw the door open and sing: Give me that Harry Potter book-thing!"

In the audience sat Robert Bonotto, a local actor and Harvard Business School Publishing employee who had a personal connection to a set of poems grouped together as "The Three Pies of Edgar Guest."

As a teenager working at Princeton High School in New Jersey, Bonotto was tasked with tracking down a poem for a patron who had promised a generous donation to the school library if a specific piece by Guest could be found.

"I had to go through every single poem of his and find this poem. I found it, but for a 14-year-old, it was a really mind-bending experience," he said. "It kept me from writing poetry for a long time."

Lin Nulman invested the first of the three Guest poems, "Raisin Pie," with bucolic enthusiasm. She lengthened her syllables to a drawl and gently rounded out the edges to Guest's testament that "for downright solid goodness that comes drippin' from the sky, there is nothing quite the equal of a chunk of raisin pie."

Doucette confessed that he had no idea what the second pie poem, a breathless account of a nightmare in which Guest is chased by a demon, had to do with its title, "Hot Mince Pie."

But the audience chuckled as Doucette read the poem's final lines, in which Guest describes being attacked by the demon and falling from an airplane: "I bumped a dozen steeples on my perilous descent, and left as many flagstaffs either snapped in two or bent. But when I woke in terror, I discovered with a sigh, How much real excitement lurks, in Mother's Hot Mince Pie!"

Bad poetry readings are "assaults on good taste and decorum" that can bring listeners together in a communal experience of misfortune, said Haber.

The Bad Poets Society last gathered at the Blacksmith House in 2001, "a couple of weeks after 9/11," Haber said. "For many, it was their first full-throated belly laugh after that event."

Dave Barker and Shaula Clarke attended the Bad Poets Society for the first time that year, on a first date that is especially memorable for the way that terrible poetry can electrify an emotionally stunned crowd: "There was a kind of energy in the room, and it was packed," Clarke recalled.

Bad poetry can also soothe the ego of anybody with thwarted poetic aspirations, Bonotto observed, recalling a book entitled "Very Bad Poetry" that hit stores when he worked at WordsWorth Books in Cambridge a decade ago.

"It was flying out of the bookstore at Christmastime," he said.

Bad poetry has a lineage that stretches back to the late 19th century, Bonotto added, "but the Internet has made everybody a writer," which means there is more bad poetry to go around.

Still, the criterion by which to judge bad poetry remains unchanged, he said: "You know it when you hear it."