Judge will decide today on sentence in school gun plot 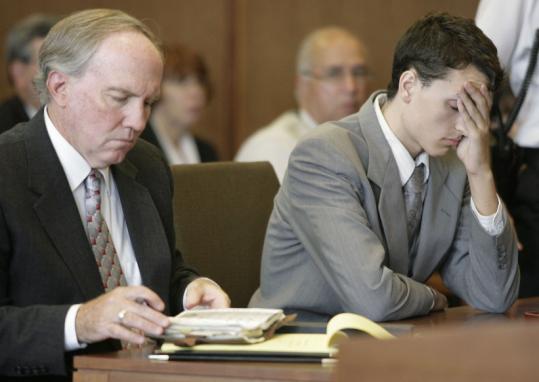 Tobin Kerns (right), 19, was found guilty of plotting a massacre at a school in September. His lawyer, William McElligott, sat at his side. (STEW MILNE/ASSOCIATED PRESS)
Email|Print| Text size – + By Emily Sweeney Globe Staff / November 13, 2007

Tobin "Toby" Kerns is Inmate 047553 in Unit FN3 of the Plymouth County Correctional Facility's juvenile detention center. He sleeps on the top bunk on the left-hand side of Cell 404, a small living space that he shares with two other teenagers.

Today, while many of his contemporaries from Marshfield High School are in their college classrooms, Kerns is scheduled to have a sentencing hearing in which a Juvenile Court judge can sentence him to as many as 40 years in prison for plotting a massacre at the school in 2004.

In two recent telephone interviews from the jail, Kerns denied responsibility for the plot while repeatedly apologizing for the disruption his arrest caused. He insisted he was framed by other teenagers and that he never expected any sort of massacre to be carried out.

"The only thing I can really say I'm sorry for is, I'm sorry for not breaking away from these kids sooner, and I'm sorry for the stress that this has put on my family and the people's tax money that has had to go toward this," Kerns said. "I'm sorry for anyone who's had to be involved in this. That's what I'm sorry for.

"Associating with these kids and being in that situation - I should have been smart enough to see that obviously that it was not a situation I wanted to be in," he said.

At the time of his arrest, Kerns was 16, with curly hair, about 6 feet tall with a healthy build. He has since grown 4 inches and has lost almost 40 pounds. He wasn't allowed to return to Marshfield High. He missed the prom, graduation day, and his grandfather's funeral. His family has moved to Seattle and faces foreclosure on their 18th-century Cape-style house on Main Street because of financial strains stemming from the case.

Kerns is now 19. To pass the time, he reads dozens of books, from law books to action thrillers. He misses his girlfriend and his cats. He worries about his credit report, draining his savings account to cover his cellphone bill and car payments, and what the future holds for him. Clearly eager to talk, Kerns spoke to the Globe in two interviews, one lasting 45 minutes and the other 30.

"The whole ordeal has torn my life apart," Kerns said. "I just want to put this behind me and live a boring, humble life."

Kerns was convicted in September. Today, the judge has the option of treating him as a minor, which would essentially allow him to be set free, or to sentence him as an adult.

Kerns says he is frightened at the prospect of doing time in an adult facility, but hopes the judge will release him.

"More and more I've been thinking about it while in here," he said. "It's definitely scary, the idea of having an adult sentence."

Kerns maintains his innocence and says he was set up by three of his former friends. "I never agreed to, or planned to, kill anyone," Kerns said. "I had nothing to do with these kids at the time of my arrest. In fact. I hadn't for some time. They went to the police and pointed the finger at me because they were afraid that I was actually going to turn them in."

The alleged plan was to launch the attack on April 20, 2005, to coincide with Hitler's birthday and the 1999 school shooting in Columbine, Colo. The date was moved up to April 15 because of school vacation, according to court documents.

One of the boys who turned him in, Joseph Nee, was later arrested and charged with conspiring with Kerns to attack the school. The other two boys with knowledge of the alleged plot, Dan Farley and Joe Sullivan, were granted immunity in exchange for their testimony.

Nee - who is the son of Thomas J. Nee, president of the Boston Police Patrolmen's Association - has been free on bail. His trial is scheduled to begin Jan. 30.

In court, prosecutors described Kerns as a troubled teen, who once had the letters D-O-S tattooed on his back, which stood for "Disciples of Satan."

Kerns said he no longer has that tattoo and instead has one with a cross and roses. He said he has read the Torah, Koran, and, at one point, books about witchcraft and Satanism. Today he describes himself as an "avid Christian" who tutors other teenagers in the Plymouth County Correctional Facility.

"With all the media coverage, people outside of the community still look at me like a monster," Kerns said. "I feel like this whole case has been about sensationalism."

In prison, Kerns said, he stands out because he is from the suburbs, "not affiliated with gang lifestyle, street lifestyle." The inmates in the juvenile unit wear maroon, standard-issue uniforms and on the adult side they wear green.

His day starts about 4:30 a.m., when the prisoners are summoned for breakfast. They return to sleep and rise again about 7 a.m. They attend school sessions each day, but he describes the juvenile unit as a "criminal factory" because there is no specialized vocational training offered and no intensive therapy sessions.

Kerns traces his troubles to late 2003, his sophomore year. That was when he started hanging out with Nee, Farley, and Sullivan. The three boys lived in another part of Marshfield and had been friends for years. They occasionally called themselves NBK, which stood for Natural Born Killers.

Kerns said Nee had told him about a plan to shoot up the school, but Kerns dismissed it as "hot air" and "not something to be taken seriously."

In May 2004, Nee got kicked out of his house and moved into the Kerns home for three weeks. It was around that time, Kerns said, that he experienced a "minor teenage melodramatic meltdown" and was hospitalized. He began to turn his life around after he got out of the hospital, Kerns said, and he distanced himself from Farley, Sullivan, and Nee. "I had nothing to do with those kids for months," he said.

In September 2004, a few days into the start of his junior year, Kerns and Nee got into a fight. Kerns had heard a rumor that Nee had been involved with Kerns's girlfriend. Kerns told Nee to stay away from her and that "someone is going to find out about your crazy plan and I hope you rot in jail."

A few days later, Farley, Sullivan, and Nee went to the Marshfield police station and told officers that Kerns had been plotting an attack on Marshfield High School. Nee told officers Kerns was into black magic and devil-worship and wanted to kill the pope and the president.

Marshfield police got a search warrant for the Kerns home. They turned up a hand-drawn map of Marshfield High School, a handwritten list of weapons and ammunition, two printed images of a Glock 18c from the Internet, journals, a PVC pipe rigged with duct tape, and what police described as a "devil worshipping book titled Necronomicon." Police also recovered an explosive device, a charred mint can wrapped with duct tape.

It was enough evidence for authorities to arrest Kerns. Initially, school officials said that there were no other suspects and that a disaster had been averted. Nee was subsequently arrested and has pleaded not guilty.

In his trial, Kerns took the stand in his own defense, testifying that Nee hatched the plot. Kerns admitted to writing down a list of weapons on paper for Nee, but only as a joke.

Almost a year passed before Judge Louis D. Coffin returned the verdict. Kerns was found guilty on Sept. 27, and taken into custody.

"I definitely did not expect a guilty verdict," said Kerns. "I just have to deal with it the best way I can," he said.