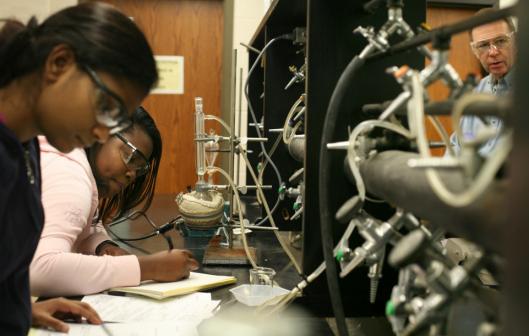 At Fitchburg State College, decades-old lead pipes in the science center mean students can't drink the water. Bunker Hill Community College hasn't added a building since it opened in 1973, forcing it to hold overflow classes late at night and on weekends. Salem State College has closed its 38-year-old library indefinitely because of fears its foundation is failing.

"When students and parents see Jersey barriers around the library, that's hard to explain," said Patricia Maguire Meservey, president of Salem State College. Newcomers to the college's science facilities, she said, feel as though "they are stepping back in time."

Across the state, the public college and university system is plagued by creaking infrastructure, cramped classrooms and labs, and outdated buildings. As lawmakers debate Governor Deval Patrick's proposal to spend $2 billion over the next decade to revamp college facilities, college officials say they have been hobbled for years in a state that is one of the nation's stingiest when it comes to spending on campus improvements.

"It's just a matter of neglect," said Martin Meehan, chancellor at UMass-Lowell, where a consultant last year estimated that 90 percent of campus buildings are outdated and need $225 million in repairs.

State lawmakers held their first hearing on the proposed legislation last week, which calls for $750 million in capital improvements over the next five years and an additional $1.25 billion over the following five years.

Half the money would go to the five-campus University of Massachusetts system, and the other $1 billion would fund improvements at the state's 15 community colleges and nine state colleges.

Some legislators caution that the need for capital improvements must be weighed against other infrastructure needs, such as roads, bridges, and mass transit.

"We will be far more generous to higher education than we have in the past, but this is not manna from heaven," said Mark C. Montigny, a New Bedford Democrat who chairs the committee that oversees capital expenditures. "There are a lot of infrastructure needs, and whenever you [issue a] bond, even when it's all good news and celebration, eventually the bill comes due."

College officials say years of meager infrastructure spending has threatened the quality of education and research and puts the state's public colleges at a disadvantage in recruiting students and faculty.

"This would be a major step forward, and is something the colleges have needed for years," said Robert Antonucci, president of Fitchburg State College and a former state education commissioner. "This goes right to our mission, which is providing an affordable, first-rate education."

The Board of Higher Education has calculated that Massachusetts from 2004 to 2006 spent proportionately less on capital improvements at public colleges than all but four states.

Over that span, Massachusetts spent about 3 percent of its budget for capital projects on higher education, compared with a 12 percent national average.

College presidents say that is too little in a state that depends on its public colleges for its workforce and economic prosperity. Most high school graduates attend public colleges, and most public college graduates remain in Massachusetts, they note.

"We don't make shoes anymore, we don't make clothes," said Rick Gurnon, president of Massachusetts Maritime Academy. "We're an economy built on brainpower. This is about the state's economic survival."

Sue Wolfe, associate vice chancellor for fiscal and administrative policy for the Board of Higher Education, said the community and state colleges have been cumulatively spending about $50 million a year below the minimum needed to maintain their facilities.

Mary Fifield, president of Bunker Hill Community College, said the campus was too small when it was built in 1973.

"We simply don't know where to put people anymore," she said. "This is like the old lady who lived in the shoe."

Weary of waiting for state assistance, the University of Massachusetts has spent $1.2 billion on capital projects at its five campuses during the past seven years, including the first new dorms at Amherst in 30 years, and a $50 million recreation center expected to open in spring 2009. The expense required money to be diverted from other university priorities.

"After years of the university adopting a wait-for-the-state-to-do-it approach, the chancellors decided they could wait no longer," said Robert Connolly, a University of Massachusetts spokesman.

"Our buildings are at the end of their useful life in every material way," she said.

Last week at Framingham State College, professors at the science center, which is in line for a $51 million renovation, said conditions at the 1975 building had steadily declined. Fume hoods in the labs provide weak suction, preventing researchers from using toxic chemicals. A safety shower lacks a drain, and the center's electrical system is on the verge of overload.

"When it comes to research, you need equipment, you need space, and you need power," chemistry professor Carol Russell said.

Russell points to two massive gray machines from the 1970s that analyze chemical compounds. With antiquated knobs and buttons, the machines are agonizingly slow, she said.

"With new machines it can take half a minute," she said.

Upstairs, an old refrigerator produces so much heat it threatens sea life in a nearby aquarium, and several one-time cold storage closets are now "totally functionless" said Gene Muller, a biology professor.

"Look at what Northeastern, BU, and BC have done" in recent years, Gurnon said. "Nothing of that magnitude has happened with the publics."