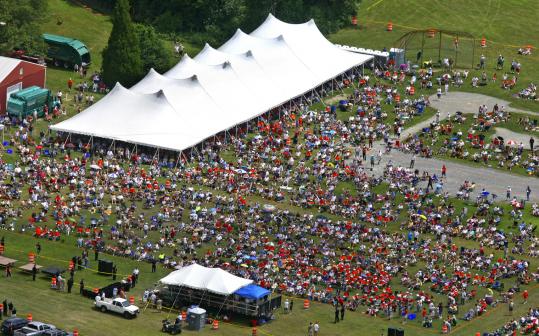 MIDDLEBOROUGH -- By a vote of 2,387 to 1,335, Middleborough residents yesterday approved a deal to bring the state's first casino to this mostly rural town south of Boston, capping a sometimes acrimonious local debate and dropping the future of casino gambling in Massachusetts into the lap of Governor Deval Patrick.

Within minutes of the final tally, the five members of the Board of Selectmen signed a 21-page legal agreement that binds the town to support a $1 billion casino when the casino developers go to the state and federal governments for approval.

"The town just took a giant step forward to preserve and enhance the town for its residents and their children," said Wayne Perkins, a longtime selectman.

Glenn Marshall, Wampanoag tribal chairman, said it was "an exciting day for everyone. Now, it's time to sit down and negotiate with the governor."

Noting that the ancestral grounds of the tribe include Middleborough, Marshall said, "We now have a home. The tribe's coming back home and I can't say how happy we are."

In exchange for its support, the casino developers are promising the town $7 million a year in cash payments, plus revenues from a 4 percent lodging assessment when a planned 1,500 room hotel opens on the site. The tribe has also promised to make improvements in town roads and other infrastructure for the benefit of the casino, and to make a onetime $2 million payment for police and ambulance services.

Middleborough, a town of about 22,000, is in dire financial straits. The town collects only $3.5 million in commercial and industrial annual taxes and is currently facing a $700,000 budget deficit. A Proposition 2 1/2 tax override for additional school funding was defeated in June.

The $7 million would represent about 11 percent of the town's current $64 million budget. And if the lodging assessment tax produces another $4 million a year, the casino's contribution would be about 17 percent of the budget.

For casino opponents, the vote marked a bitter defeat, but some vowed to fight on.

"This is only the preseason," said Richard Young, a prominent casino opponent. "The regular season has yet to begin."

The Town Meeting, one of the largest in state history, opened at about 11 a.m. Under the direction of Town Moderator James Thomas, two town committees delivered reports: the seven-member casino study group unanimously in favor, and the finance committee voting 5 to 2 against the casino.

After statements by supporters and opponents, Marsha Brunelle, chairman of the town selectmen, at about 1 p.m. moved to close debate. The vote to authorize the selectmen to sign the agreement was by paper ballot. When the final tally was announced over the loudspeaker, a cheer went up from supporters.

"This is like a Thanksgiving Day turkey," he said. "This deal is stuffed with extra money."

But David Parker, an opponent, said a casino would bring traffic, health, and crime problems.

Secretary of State William Galvin sent observers to the Town Meeting and did not find significant problems with the conduct of the vote, said spokesman Brian McNiff. Galvin had expressed concern about the town's ability to handle the large scale town meeting last week.

The vote ends a whirlwind three months for the town. On April 27, the tribe's financial backers snapped up 120 acres of woodland at a town auction of public land. Within weeks, the developers secured options to buy an additional 200 acres of land in the same area, approximately a mile from Interstate 495.

The Wampanoag tribe then unveiled their financial partners: Sol Kerzner and Len Wolman, the billionaire developers of Mohegan Sun.

Negotiations over an agreement occurred secretly between the casino developers and Jack Healey, the longtime town manager. Healey pounded out a pact that would give the town $7 million a year in exchange for agreeing to host the casino, but howls of protests from some local residents led the board of selectmen to go back to the bargaining table.

In a second round of negotiations, the town was represented by Dennis Whittlesey, a Washington lawyer specializing in Indian casino law. He and Jonathan D. Witten, a town lawyer, added a significant new condition to the town's agreement to support the casino: 2 percent of annual gambling revenue.

But the developers rejected that draft, leading to a final agreement that retained the flat $7 million annual payment to the town, dropped the 2 percent of revenue provision, and added a self assessment of 4 percent on lodging to be paid to the town.

The developers touted that lodging tax as worth $4 million a year to the town, but casino analysts who reviewed the data said the estimate was too high, and the town was likely to get about $2.3 million annually.

Attention now turns to Washington and Beacon Hill. The developers have said they will simultaneously seek approvals from Governor Deval Patrick and the Legislature, and from the US Department of Interior, which oversees the federal Bureau of Indian Affairs.

Marshall has had preliminary discussions with Patrick, but agreed to Patrick's request to wait at least until Labor Day to allow the governor to study the proposed expansion of gambling in the state.

Marshall has also said he is aware of House Speaker Salvatore F. DiMasi's repeatedly stated opposition to casinos. However, Marshall termed the state's political leadership "open-minded, reasonable people," with whom he would be comfortable negotiating.

Under the federal Indian Gaming Regulatory Act of 1988, tribes can conduct the same level of gambling that is already sanctioned in their state. Massachusetts does not permit slot machines, which are by far the most profitable segment of a casino's operation.

But the law also requires states to negotiate with tribes that wish to operate a casino with slot machines or other forms of gambling that are customarily prohibited by the state. Under similar negotiations, the state of Connecticut in the 1990's granted the tribal operators of Mohegan Sun and Foxwoods the exclusive right to operate slot machines in exchange for 25 percent of the slot revenue.

The two Connecticut casinos last year paid $433 million to the state under that agreement.

Complicating the picture in Massachusetts is the push by the owners of the state's four race tracks to add slot machines to their ailing facilities, making it politically less likely the Wampanoags would receive slot machine exclusivity, and thus less likely the state will receive the same 25 percent of slot revenue that tribes in Connecticut pay to the state.

Furthermore, state Treasurer Timothy Cahill has spoken out recently in favor of the state auctioning licenses to operate slot machines to the highest bidder. Cahill said the state would be able to tax revenues at those so-called commercial casinos at a higher level than Indian casinos.

On the federal level, the developers must navigate the Department of Interior's administrative process, which requires extensive environmental review and economic analysis before granting reservation status to Indian land. The Wampanoag tribe owns more than 100 acres of land in Mashpee, but it is not reservation land.

The tribe, which has roots in southeast Massachusetts and Cape Cod, including Middleborough, gained federal recognition this year, after more than 30 years of petitioning the federal Bureau of Indian Affairs.

The state's only other federally recognized tribe, the Aquinnah Wampanoag on Martha's Vineyard, failed in numerous efforts in the 1990s to win state approval for various casino plans it proposed for Fall River, New Bedford, and other areas of southeast Massachusetts. Donald Widdiss, the Aquinnah tribal chairman, recently said his tribe is pursuing plans to operate a casino.

The Mashpee Wampanoag tribe, which has 1,450 members, wants to operate a $1 billion resort casino, complete with thousands of slot machines, gaming tables, a 1,500-room hotel, shops, restaurants, golf course, and other features.

With its financial backers, who stand to receive billions in profits, the tribe's goal is to replicate Mohegan Sun, one of the world's largest and richest casinos. Mohegan Sun's current revenues are $1.57 billion, generated principally from 6,200 slot machines.

PHOTO GALLERY: Voices of the voters

It was a big decision for a small town

PHOTO GALLERY: Middleborough rolls the dice
Your comment is subject to the rules of our Posting Policy
This comment may appear on your public profile. Public Profile FAQ