In Newton, they still speak the language of the lake 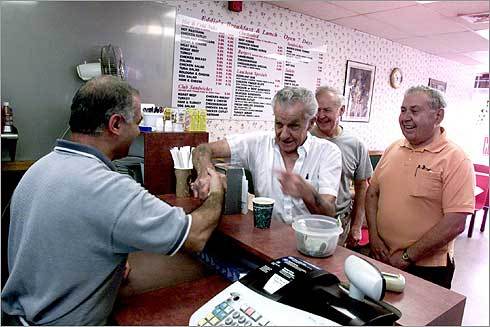 NEWTON—It's a sunny morning in the heart of The Lake, and Anthony "Fat" Pellegrini is standing on Watertown Street, ready for business. He's armed with hand-written fund-raising lists and an old cigar box, and ready to remind pals and passersby - largely one and the same - of their civic responsibilities.

These folks don't actually need any reminding; they have already pulled wads of bills from their pockets for Fat, who will use the cash to buy flowers for the wake of a local woman at Magni Funeral Home and fruit baskets for several hospitalized locals.

Most people here see Fat as the unofficial mayor of this village, nicknamed for now-vanished Silver Lake. Fat is one of the few who still remember the old Bottle Alley, named for its Prohibition-era misdeeds, the stables that once housed draft horses, and his own youth spent running numbers between barrooms along this same sidewalk.

"Hey, mush!" he calls out to greet his fellow Lake old-timers, in a special lingo used by generations of Nonantum natives, many of whom, like the 76-year-old Fat, can trace their heritage to the turn of the century when their ancestors emigrated from San Donato, Italy, to Newton.

The mark of a true, old-school Lake resident is talent for the so-called Lake language - a collection of words and phrases believed to have roots in Romany, a language spoken by Gypsy immigrants from Europe, and brought back to the Lake early this century by local youths who worked for a time with traveling carnivals.

The Romany words mixed with Italian, English, and other street slang of the 1930s and '40s to produce a lively mix that is one of the strongest links to the Lake's proud and rough-and-tumble past.

Language experts say it is not uncommon for mini-dialects to crop up in tightknit communities like Nonantum, which has held tight to its cultural identity, while other villages in Newton changed and diversified.

"Language varies by a number of factors, including region, geography, and social factors, and educational levels, and it thrives under certain kinds of isolation," said Joe Pickett, executive editor of Houghton Mifflin's American Heritage Dictionary. "People have always used language to assert their identity."

You don't have to be a lifelong Laker or of Italian descent to speak the lingo, Fat says, but it doesn't hurt. It's an expressive, no-nonsense language of the street, spoken mostly among close male friends to communicate camaraderie, or to say things that could not be said openly or politely - warnings of a stranger in the neighborhood, an approaching police officer, or a beautiful woman coming down the street. Meaning comes not just from the word, but tone of voice, body language, facial expression, and social status of speaker and listener.

Like teenagers in all cultures, the young men of the Lake embraced a language that allowed them to talk to one another privately in words outsiders could not understand, said Allan Metcalf, author of "How We Talk: American Regional English Today."

Mush, pronounced moosh, means guy. Sometimes friend, sometimes foe, depending on tone of voice. A divia mush [di-vy-ah moosh] is a crazy guy, while a quister mush is a good, stand-up guy.

Lake language - which is phonetic with no official spellings - is most often mixed with English words to make its meaning clear. For example, "How can you oy [eat] that inga [junk, crap]?" or "This mush is divia" [this guy is crazy] or "That mush has some overshay" [he lies, tells untruths, pronounced ovah-shay].

The lingo comes in particularly handy when a speaker wants to warn a companion about impending trouble, according to a guide written by retired Newton Police Sergeant Charles Kennedy, a Lake native.

Kennedy was on patrol with another local-born officer when his partner barked, "Sarge, mush has a coramunga in his cover!" or, loosely translated, "That guy is carrying a gun!" (Kennedy later confiscated a .45 revolver from the interloper.)

Many of the words seem to have clear roots Italian and Romany.

Such words as "jivial," or young girl, bears a resemblance to "gioventa," the Italian word for young person. "Divia," Lake language for crazy, could come from the Italian word "divila," meaning devilish. "Chabby," which means young boy among Lakers, could be descended from "chavvie," the Romany word for boy. Likewise, the word "chor'd," which means stolen, bears a striking resemblance to "choro," the Romany word for thief. Other Lake words bear no obvious resemblance to either language, leaving unanswered questions about where they come from.

Locals don't care so much about where Lake lingo comes from, they are much more interested in how it has helped bond Lake residents together long after they have left the neighborhood.

Legends abound of Lakers who reconnected with old friends and neighbors after catching a word or phrase of the language as far away as Asia.

"If you hear it, you know that someone is from the area," said Robert Pupa, a Lake native now living in Hudson. Pupa recalled once getting annoyed with a coworker, and muttering "Cuya moi" [pronounced coo-ya moy, meaning shut up, or go to hell] under his breath.

"The guy turns to me and says, `I didn't know you were from The Lake.' We were best friends after that," said Pupa. "It's a language from no place else."

Local talk show host Jackie Morrissey said that one of the most famous stories is of a young infantryman from the Lake, Joseph Rousseau, who was serving with the Marine Corps in Korea. Rousseau lay badly injured on a train returning from battle at the Chosin Reservoir, when he heard an MP in a nearby car yelling in frustration, "All you divias sit down! Sit down you divias!"

"He was lying there, dying, and all of a sudden he hears Spike Aikens shouting and coming through the car, and Joe realized it was someone from home. Joe started to yell out Lake talk and Spike came over. Joe said it gave him the will to live. He said he'd given up a little bit."

But most of the time, the language is just for kibbitizing among the guys.

"You talk the Lake language and only people from there can understand you," said state Auditor Joe DeNucci, who grew up in the Lake during the 1950s, and now lives in West Newton. "An awful lot of what it means is how you say it and how you use it. You improvise a lot, mixing it with carnival talk and bebop."

End of an era

As they watch The Lake enter the 21st century, Pellegrini and his friends readily admit that they have at least one foot planted in another era.

Most of them are children of non-English-speaking Italian immigrants, survivors of the Great Depression and veterans of World War II who came of age long before the world had heard of personal computers, equal opportunity, or political correctness.

They are amazed by skyrocketing real estate prices and infuriated by assumptions that Newton is a city full of wealthy yuppies. They lament how many young people leave The Lake because they cannot afford to buy a home.

Pellegrini worries the Lake lingo and the neighborhood's iron-clad ethos - that people stick together and help each other out in need - will die when he and his friends do.

For now, though, it appears at least the Lake language is alive and well. Fat's granddaughter, 11-year-old Siobhan Anderson, said she even uses some of the Lake words with her pals from Lincoln-Eliot Elementary School.

Siobhan said she knows the new kids she will encounter at Bigelow Middle School may not be down with the lingo. "They'll be, like, `What?,' " she said. "Sometimes you have to explain."