Rock in a hard place 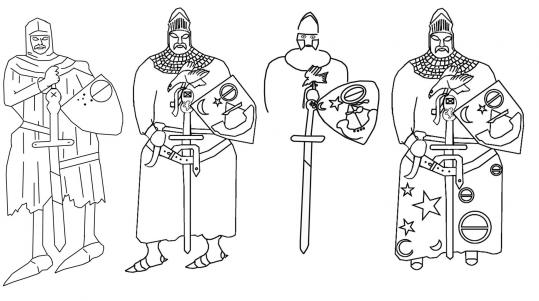 Even locals in Westford are often hard-pressed to direct visitors to the site of the famed Westford Knight, a carving made legend in numerous works of fiction that link the stone effigy to a Scottish pre-Columbian explorer and his supposed Templar treasure.

One glimpse at the odd carving and it’s easy to see why it’s overlooked. Much detail on the carving, located on Depot Street on the outskirts of Westford’s town center, has been lost to the ravages of time and the seasons. In the 1950s, a full-size figure could be seen on the face of the glacial boulder; today only a pommel and broken blade remain clearly visible.

“I would like to see the carving preserved for posterity so that somebody, somewhere, might be able to tell us more about it,’’ said Elizabeth Lane, who has been trying for the last 13 years to protect the worn effigy from erosion.

Lane hopes release this month of a book about the carving, “The Westford Knight and Henry Sinclair: Evidence of a 14th Century Scottish Voyage to North America,’’ will reignite interest in protecting it.

In the book, author David Goudsward, a Haverhill native who has long been interested in New England megalithic sites, details the Westford Knight’s storied history and explains how it evolved from local curiosity to what he believes to be evidence of pre-Columbian Scottish explorers visiting the New World. More recently, it has been linked to tales of secret societies and sa cred relics of the Knights Templar hiding in North America.

Over the years, Goudsward reveals, the punch-marked bedrock has inspired a variety of interpretations. In the 1800s, locals glimpsed an Indian caricature with a melon-shaped body, but by the late 1930s, a new theory was grabbing national headlines. An antiquarian who was searching for evidence of Vinland in New England claimed the carving was of an Irish face-cross, similar to one found on the isle of Skellig Michael.

Then, in 1954, Connecticut archeologist Frank Glynn cleared away much of the moss and lichen that covered the andalusite ledge and spied a medieval knight. He identified it as a memorial to a fallen Viking of the Gunn clan who had died on Westford’s Prospect Hill while on an exploration with Scottish nobleman Henry Sinclair during the late 14th century — nearly 100 years before Columbus’s voyage to the New World.

Goudsward writes Glynn’s interpretation prompted interest on both sides of the Atlantic. Historians debated the carving’s origins; some sought to link the effigy to other archeological mysteries, including the Newport Tower in Rhode Island and Rosslyn Chapel in Scotland.

There have, however, been many doubts raised about the knight’s origin. One archeological study concluded that much of the carving is more likely natural scratches caused by glaciation. A historian dated an inscription on the rock to the late 19th century, and others who have studied the terrain believe the area was inaccessible to humans in the 14th century, covered by three to four feet of earth.

Articles on the Westford Knight appeared in Yankee Magazine and The Christian Science Monitor, Goudsward noted. The carving also was mentioned in several books about trans-Atlantic crossings. Despite that, little was done to protect the Knight from the elements, Lane said.

By 2001, a small group of locals concerned about the Knight’s vulnerability to the elements had finally secured a small sum to protect the ledge. The Clan Sinclair Association Inc., a nonprofit organization whose membership consists of descendants of the Scottish nobleman, drafted a design for a shelter. The Clan Gunn Society of North America also pledged its support. But ultimately the plans fell apart. An attempt to have the Westford Knight listed as a state historic site also failed. And in the years that followed, those who had played a key role in the ill-fated preservation efforts retired and moved away, Lane said.

“It’s complicated,’’ said Norman B. Biggart of Burlington, a Clan Gunn Society member who has spent the past 30 years researching the Westford Knight’s history. “Preservation of the Westford Knight involves money, two Scottish clans, and property in a historic area of the town. The two clans haven’t gotten together on this issue yet, and I don’t think either clan has enough money to build a decent shelter.’’

With plans for a permanent shelter abandoned, locals began covering the carving with a plywood frame during the winter months to protect it from salt and ice. However, these days the bedrock is exposed.

“A geologist from Minnesota told us that the plywood cover might actually do more harm than good because it didn’t allow moisture to evaporate,’’ said David Brody, cochairman of the Westford Knight Committee, the town board that oversees the Knight. “We need to move forward to preserve the Knight carving, but what the next step will be, I can’t say with any specificity. Not much is happening right now, to be honest.’’

Brody and Lane, working independently, still hope that that may soon change. The publication of Dan Brown’s wildly successful thriller “The Da Vinci Code’’ in 2003 sparked renewed interest in the mysterious carving and its possible connection to the Sinclair clan.

Ardent believers theorize that Sinclair’s expedition included Templar survivors who fled Scotland in the late 1300s to escape the reach of the Catholic Church.

“If the tale is true, it tells a whole different story about the history of North America and its discovery,’’ said Rich Gunn of Wilton, Calif., president of the Clan Gunn Society, who came to see the Westford Knight last summer while on a trip to the East Coast.

“I asked a lot of locals for directions, but even they didn’t know where it was,’’ explained Gunn. “Finally, I went to the Westford Fire Department. One of the fire captains looked it up in a property database — luckily, he knew who owned the house where the Knight is located.

“When I finally found it, It was a bit of a disappointment,’’ Gunn admitted. “It’s so weathered now that it’s almost impossible to discern.’’ Despite its condition, visitors from Europe are still drawn to the site.

“We correspond and then they come,’’ said Lane, known locally as the “keeper of the knight’’ at the public library, where she has saved publications on the Knight. “When they see it, they recognize it for what it is immediately.’’

The Knight also has attracted attention here in the States. It was featured in 2009 on a History Channel documentary, “Holy Grail in America,’’ which examined whether it is possible the Knights Templar, fleeing persecution in Europe, arrived in America, perhaps bringing with them the Holy Grail.

The carving also played a role in Brody’s 2009 novel, “Cabal of the Westford Knight: Templars at the Newport Tower,’’ and is soon featured in a Discovery Channel series on archeological mysteries.

Goudsward is optimistic that the enigmatic carving can be preserved for future generations to ponder and perhaps resolve.

“Whether the carving is actually a Scottish knight or not is almost irrelevant at this point,’’ said Goudsward, who takes issue with the Templar conspiracy theories and fears the true history that the carving represents will be mired by conjecture. “It is such an intrinsic part of the tapestry of Westford, it should be preserved and treasured as a local landmark.’’

If you’re intrigued about the possibility of pre-Columbian exploration of North America by Europeans, there are several sites in the Globe North region you may want to visit:

America’s Stonehenge
( a.k.a. Mystery Hill)
105 Haverhill Road
Salem, N.H.
This maze of chambers and ceremonial meeting places may be the oldest manmade structure in the country, and some claim that it dates to 2,000 B.C. It contains various inscriptions and an astronomical calendar. Theories on who built it range from a Bronze-Age British culture to Celt-Iberians to 19th-century farmers to early 20th-century pranksters. www.stonehengeusa.com

Phaeton Rock
(a.k.a. Cannon Rock and the Lynn Dolmen)
End of Phaeton Rock Road, Lynn.
Some believe this flat 65-ton stone, balanced on three small boulders, is a dolmen, or burial chamber, and thus evidence of Pre-Columbian exploration of the New World by Europeans. www.lynnmuseum.org

Thorvald’s Rock
(Hampton Rune Stone)
Tuck Museum
40 Park Ave.
Hampton, N.H.
Some say this boulder at the foot of Boar’s Head near Thorvald Avenue marks the grave of Norse explorer Thorvald . The lines scratched on the boulder were thought to be a runic epitaph, but scholars now believe if Ericsson’s burial site is in North America, it is in Canada. www.hamptonhistoricalsociety.org

Westford Boat Stone
Lower level of the J.V. Fletcher Library
50 Main St., Westford
Within walking distance of the Westford Knight, this stone features a carving of a single-mast ship, an arrow, and the number 184. Some believe the stone dates to medieval times.

@PaulRevered on Twitter
Alerting you to what's interesting on Boston.com