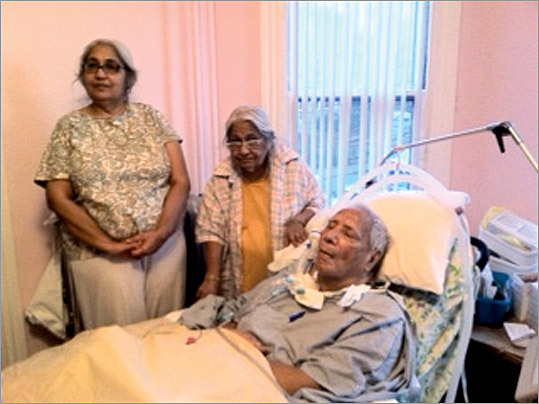 Manjushri Prakash, left, and her mother, Nirmala, tend to her father, Kanti, in the makeshift care unit they have in their Cambridge home. The family may lose their home over unpaid bills from Kanti Prakash's hospitalization of more than two years. (Kevin Cullen)
By Kevin Cullen Globe Columnist / December 12, 2010

When Kanti Prakash and his wife, Nirmala, moved to the big, sprawling Victorian on Leonard Avenue in Cambridge almost 10 years ago, one of the things they most liked about their house was its location — sandwiched between, and just a stone’s throw away from, Youville Hospital and Cambridge Hospital.

“They were getting up in years, so they took great comfort in being so close to the hospitals,’’ said their daughter Manjushri. Now they might lose that house to one of those hospitals.

In my business, it is not unusual to get calls from people complaining that their elderly parent has been pushed out of a hospital too soon.

But the saga of Kanti Prakash, 91, is a case of man bites dog. His family says he was kept in the hospital too long, for 2 1/2 years, long after his insurance ran out, leaving the family holding a bill for nearly $1 million.

They will not pay, so the hospital — originally Youville, but now Spaulding Hospital Cambridge, which bought Youville last year — has slapped a lien on the Prakash house and has gone to court to seize it.

The Prakashes are about the last people you would expect to find in a pickle like this. They are the immigrant success story, highly educated, high achievers. Kanti Prakash worked as a civil servant for the Indian government before his wife, an acclaimed mathematician, accepted a teaching position at Massachusetts Institute of Technology in 1971. Two of their daughters went to MIT: Manjushri became an architect, while Sadhana is a research biologist. Their third daughter, Snigdha, went to Harvard and became a reporter for National Public Radio.

“It shouldn’t end like this,’’ Manjushri says, clearing the tube that runs from a respirator to her father’s neck in the second-floor living room of the family home that has been converted to a hospital room.

In January 2008, Kanti Prakash had trouble breathing and was brought to Cambridge Hospital, just around the corner from his house. By February, he was moved down the street to Youville.

From the beginning, Manjushri Prakash says, the family felt they were being left in the dark.

“They put him on all sorts of medications, without asking us,’’ she said. “They diagnosed him with Alzheimer’s, and nobody told us. His nervous system was debilitated. They made things worse, not better.’’

She said the family asked to have him transferred to Mass. General or Beth Israel but were told he was too sick to move from Youville.

Then, in March and April 2008, she says, the family began repeatedly asking that her father be released to their care.

“Every time he was close to being released, something happened,’’ his daughter said. “An infection. A fever. There was always some excuse that we couldn’t take him home and care for him ourselves.’’

Medicare covered the first 100 days, she said, and his private insurance paid the bills up to June 2009. After that, the meter started running. He wasn’t released until June 15, 2010.

“We calculated that the hospital billed the insurance about $2 million,’’ she said. “Now they want another million, which we don’t have.’’

Maureen Banks, president of Spaulding Hospital Cambridge, says hospitals are used to complaints from people about early discharges. The Prakash complaint, she says, is more than unusual.

But she rejects any suggestion that Kanti Prakash was kept in the hospital any longer than necessary, or that he got substandard care.

“There’s no incentive for a hospital to keep a patient any longer than necessary,’’ Banks said.

She said Kanti Prakash had a very complicated condition, and that the hospital — first as Youville, then as Spaulding — had an obligation to make sure “that there was a safe discharge plan in place.’’

“The fact that he is safely at home and his family is able to take care of him is, I would argue, proof that his care was very well handled,’’ said Banks.

Banks said the whopping bill the Prakash family owes is of their own making, that they dug their heels in and refused the hospital’s attempts to help them sort the bill out.

“We worked extraordinarily hard to help this family,’’ Banks said. “To set up payments. To help them apply for assistance. I can’t think of a stone we didn’t look under to help them. There was no engagement on their part whatsoever.’’

“They will say anything to avoid responsibility,’’ she said.

For all the talk about health care reform, the case of Kanti Prakash shows that any family, even the most successful, can be made destitute by long-term illness.

Nirmala Prakash is 85. She is small, walks slowly because of a stroke, and just finished writing her third book. She asked me if I had ever read her second book, “Mathematical Perspectives on Theoretical Physics: A Journey from Black Holes to Superstrings,’’ a classic text in its field. I had to confess I hadn’t. Her shoulders sank. She moved closer to her husband and rubbed his shoulders.

Her specialty is black holes, and that’s where she finds her family living right now, caught between tending full time for her husband, trying to save him, trying to save their house.

Every once in a while, Kanti Prakash will wake and call out for his daughter Manjushri, using her pet name.

He means India, and his daughter would take him there if she could.

Instead, she adjusts his breathing tube, an architect working as a nurse in a living room serving as a hospital.

“If you’re asking me why they kept him in so long, I’d say they were hoping he’d die in the hospital and the whole story would die with him,’’ Manjushri Prakash said. “But my father is strong. Stronger than they ever imagined. And so are we.’’