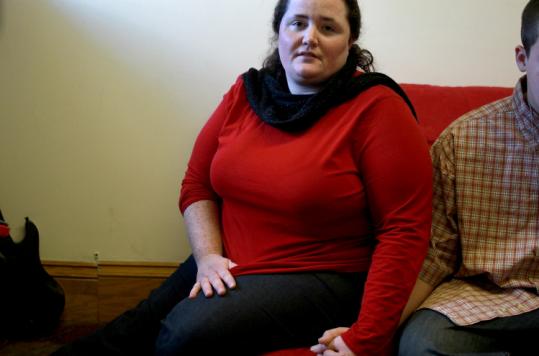 Meridith Viano’s son, seated with her, spent days in a hospital waiting area until a psychiatric bed was made available. (Suzanne Kreiter/ Globe Staff)
By Kay Lazar Globe Staff / October 27, 2010

Children who are hallucinating, feeling suicidal, or suffering other acute mental health problems are increasingly being turned away from some Massachusetts hospitals’ psychiatric wards, a problem the hospital industry acknowledges and blames on insufficient insurance payments to cover treatment of such sick children.

The troubled children are often kept waiting in emergency rooms, sometimes for days, or sent home until a hospital agrees to admit them.

Dr. JudyAnn Bigby, the state’s health and human services secretary, said yesterday that hospitals licensed to treat mentally ill children must provide that care if they have sufficient staffing and beds, regardless of the reimbursement rates. While the precise number of children affected is unknown, Bigby said her agency has heard a number of complaints recently, prompting it to organize a task force of advocates and providers that will soon begin meeting to assess the scope of the problem and forge solutions.

Troubled children have experienced periodic delays being admitted to psychiatric units in past years, but the cause was usually a shortage of beds. Advocates for mentally ill children say now the problem is different.

“There are plenty of hospital beds,’’ said Lisa Lambert, executive director of the Parent/Professional Advocacy League, a Massachusetts mental health organization that says it has been fielding a lot of calls on the issue from families.

“But now the hospitals are saying the kids are too acute, which is baffling,’’ Lambert said.

Meridith Viano, a Leicester mother, said she was told earlier this month that her 15-year-old son, who was hearing voices and not recognizing members of his own family, was “too acute’’ to be admitted to MetroWest Medical Center in Framingham, the closest hospital licensed to admit children and adolescents with mental health problems.

She had taken him to the emergency room of UMass Memorial Medical Center in Worcester, and he ended up spending two nights in a locked area of the waiting room near the emergency department’s adult mental health section. UMass is not licensed to admit mental health patients younger than 16.

“So for two days he had to hear adults screaming and being detoxed. It was horrible.’’ Viano said. “I was with him and saying, ‘He really needs help.’ ’’

Finally, on the third day, Lambert, the health advocate, said she called the Vianos’ insurance company and was able to speak to the company’s chief executive. Within 20 minutes, the Vianos were told that a bed suddenly opened up for the teen at MetroWest. He was treated there for two weeks and is now back at school. But Viano worries that her son’s two-night experience in the locked waiting room may make him less open to help in the future.

Mary Mullany, director of behavioral medicine at MetroWest Medical Center, said she could not comment on the Vianos’ case because of patient confidentiality rules. But she said that during the two days Viano’s son was waiting in the UMass ER to be admitted, her 12-bed pediatric unit was full or had one bed open in a double room but that the youngster in that room was too troubled to have a roommate. On the day Viano’s son was admitted, MetroWest did have an opening, she said.

The director of the trade association for hospitals that treat psychiatric patients acknowledged that there has been an uptick in children being turned away by mental health units, and he cited several factors, including lagging reimbursements from the state and private insurers.

David Matteodo, executive director of the Massachusetts Association of Behavioral Health Systems, said that reimbursement from the state Medicaid program and from private insurers for treating psychiatric patients has been insufficient for several years — about 75 cents for every dollar spent. In better financial times, hospitals often absorbed the losses from their psychiatric units because other departments made up the difference, but hospitals are less inclined to do that now, he said.

“The financial pressure that has been put on the units has made it increasingly hard for them to take the difficult patients,’’ Matteodo said. “A difficult patient may need a private room, they can’t share a room, or they may need a staffer 24/7 watching them. That can be costly.’’

He said that a hospital’s psychiatric unit may already have several aggressive or difficult young patients that are taxing the staff, and even though every bed is not full, a decision is made to accept no more patients because they cannot be safely accommodated without bringing in more staff.

Eric Linzer, a spokesman for the Massachusetts Association of Health Plans, which represents most insurers, said hospitals are expected to honor their contractual obligations for pediatric mental health services, regardless of the reimbursement rate.

“We recognize there may be certain instances in which a provider refuses to take a child, in which case the health plan will work with the family to find a bed at an appropriate institution,’’ said Linzer.

He said soaring hospital costs, not inadequate payments from insurers, are the problem.

Mental illness among children tends to be cyclical, specialists say, with problems typically peaking in the fall and spring, and easing during summer months.

Bigby said the state has made progress on the related issue of “stuck kids’’ — children deemed well enough to leave hospital psychiatric units but trapped in them for lack of treatment programs outside. That created a backlog of youths who couldn’t get in to the hospital. But today the number of such patients is down to about 50 from 160 children four years ago, Bigby said, because the state concentrated on finding appropriate outpatient care for them.