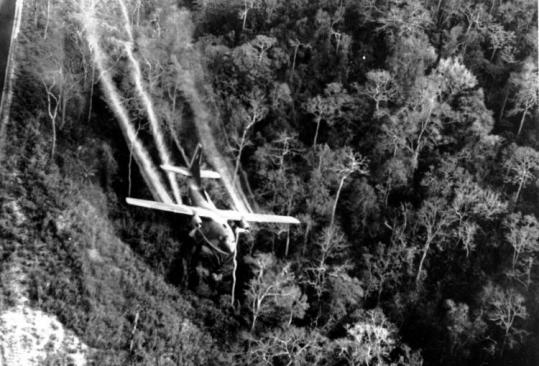 In this 1966 photo, a US Air Force C-123 sprayed the Agent Orange defoliant along a South Vietnam jungle. (Department of Defense File 1966/ Via Associated Press)
By Mike Baker Associated Press / August 31, 2010

RALEIGH, N.C. — By his own reckoning, a Navy electrician spent just eight hours in Vietnam, during a layover on his flight back to the United States in 1966. He bought some cigarettes and snapped a few photos.

The jaunt did not make for much of a war story, and there is no record it ever happened. But the man successfully argued that he may have been exposed to Agent Orange during his stopover and that it might have caused his diabetes — even though decades of research into the defoliant have failed to find more than a possibility that it causes the disease.

Because of worries about Agent Orange, about 270,000 Vietnam veterans — more than one-quarter of the 1 million receiving disability checks — are getting compensation for diabetes, according to Department of Veterans Affairs records obtained through the Freedom of Information Act.

More Vietnam veterans are being compensated for diabetes than for any other malady, including post-traumatic stress disorder, hearing loss, or general wounds.

Tens of thousands of other claims for common ailments of age — erectile dysfunction among them — are getting paid as well because of a possible link to Agent Orange.

And taxpayers may soon be responsible for even more: The VA said yesterday that it will add heart disease, Parkinson’s disease, and certain types of leukemia to the list of conditions that might be connected to Agent Orange. The agency estimates that the new rules, which will go into effect in two months unless Congress intervenes, will cost $42 billion over the next 10 years.

Lawmakers and federal officials who have reservations about the spending are loath to criticize a program that helps service members. The officials have largely ignored a 2008 report in which a group of scientists said the decision to grant benefits to so many on such little evidence was “quite extreme.’’

“There needs to be a discussion about the costs, about how to avoid false positives while also trying to be sure the system bends over backward to be fair to the veterans,’’ said Jonathan M. Samet, a public health specialist who led that study and now serves as director of the Institute for Global Health at the University of Southern California.

The VA uses a complex formula when awarding benefits and does not track how much is spent for a specific ailment, but AP calculations based on the records suggest that Vietnam veterans with diabetes should receive at least $850 million each year.

That does not include the hefty costs of retroactive payments or additional expenditures for health care. The agency spends $34 billion a year on disability benefits for all wars.

Dr. Victoria Anne Cassano, director of radiation and physical exposures at the Veterans Health Administration, part of the VA, pointed to the wording of the 1991 federal law on Agent Orange that said officials should find a positive link to diseases “if the credible evidence for the association is equal to or outweighs the credible evidence against the association.’’

Cassano said the law requires the VA to act without consideration of cost. She also said it is the best way to ensure that deserving veterans do not get lost in the shuffle.

Agent Orange was a dioxin-laden defoliant that was sprayed over jungles to strip the Viet Cong of cover. American forces often got a soaking, too, and Agent Orange was later conclusively linked to several horrific health ailments, including cancers. So Congress and the VA set up a system to award benefits to veterans who needed only to prove that they were in Vietnam at any time during a 13-year period and later got one of the illnesses connected to Agent Orange.

But the VA, interpreting that 1991 law and studies that indicated potential associations, has over time added ailments that have no strong scientific link to Agent Orange.