Actress Glenn Close, her sister, and her nephew are part of a campaign to destigmatize mental illness 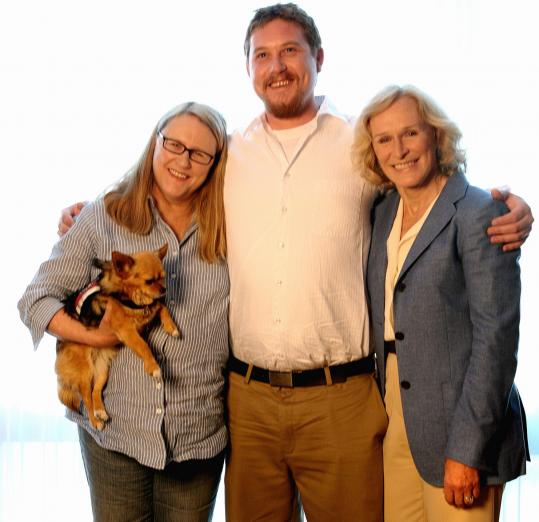 “Our single goal is to get people talking openly and without shame about mental illness,’’ Glenn Close said earlier this month, when she and her family members talked about their experiences and accepted awards from McLean Hospital in Belmont for their work reducing the stigma that surrounds psychiatric disorders. “Say it loud, say it again and again until it has lost its power over us. Make the unspeakable speakable.’’

The TV ads, from a campaign called BringChange2Mind, are part of a new emphasis in the mental health community that sees families as crucial to the success of a patient’s treatment, and also recognizes that mental illness takes a toll on parents and siblings. It seeks to educate family members to correct any misperceptions they may have, and provide them support.

“It’s not just an individual who lives with and suffers illness but a family that lives with and suffers illness, whether that illness is breast cancer or diabetes or mental illness,’’ said Joanne Nicholson, a psychologist at the University of Massachusetts Medical School who specializes in family mental health. “Families provide an incredible opportunity to promote recovery and well-being and functioning. Families who don’t understand about mental illness, or don’t talk about mental illness, can undermine a person’s treatment or access to treatment.’’

Karen McGravey-Gajera knows the pain of seeing her son and family struggle with mental illness. She is now a family educator and support coordinator for the National Alliance on Mental Illness of Massachusetts, the local chapter of the advocacy, education, and support group composed of people affected by mental illness. But eight years ago she was stunned by the change she saw in her son. The day he had a psychotic break, running into the house and talking about the voices he heard, was the worst day of her life. “He was a regular everyday kid, then he turned into this person I didn’t know anymore,’’ she said in a recent interview. “It was almost like a death.’’

She came to NAMI’s Family-to-Family Education Program just after her son was diagnosed with schizophrenia. Families learn about symptoms, medications, communication, and empathy for their loved ones. That kind of information is hard to get from doctors and hospitals, McGravey-Gajera said.

She found comfort being with people who knew what she was going through, whether their loved one had depression or schizophrenia or bipolar disorder. “For me it was very new. I did a lot of crying in the class,’’ she said. “There’s so much guilt. ‘This came from me, it’s my genes, and also the thought, I can’t go on vacation because my family member is suffering so much.’’

Her son has had a hard time with medications that never seem to work very well. He doesn’t go out of the house, communicating with friends via Facebook. Like other parents, she has had to let many dreams go. “When you have kids, you think they’re going to grow up, have a job, get married, and you’ll have grandchildren,’’ she said. “Then you hear that word ‘schizophrenia.’ And when the medications aren’t working, it’s a rough time.’’

Families with members who have mental or emotional disorders live on a roller coaster, she said. On good days, they wait for the other shoe to drop. And she worries about her other two children. “I have a younger son — he’s 11 — and he was having optical migraines. He was so afraid — he thought that he was getting schizophrenia. He shouldn’t even know this word, but he’s worried it might happen to him.’’And stigma of mental illness is still strong, McGravey-Gajera said. “If somebody gets cancer, people come over with a casserole. If somebody has a mental illness, nobody shows up.’’

The anti-stigma BringChange2Mind initiative was cofounded last year by Glenn Close in conjunction with several national and international mental health organizations. Their family’s struggle to understand Jessie’s and Calen’s illnesses was made more difficult by the lack of understanding that they, like many other families, had about mental illness — until it hit home.

Jessie Close was ill both as a child and as a parent. She first tried to kill herself at 16, then asked to see a psychiatrist. But that just wasn’t done, she was told by their stiff-upper-lip, pull-your-socks-up, don’t-talk-about-it Connecticut Yankee family. She used alcohol and other drugs to blunt the pain of despair that followed her manic highs. Now 56, she wasn’t diagnosed with bipolar disorder until she came to McLean in 2004, when she was again contemplating suicide.

Jessie’s son Calen, 28, had already spent two years at McLean being treated for schizoaffective disorder, which is a combination of schizophrenia and bipolar disorder (and too much to fit on a T-shirt in the TV spot, Jessie explained). As a teenager, he lost touch with reality and his mother lost the boy she knew. “All I knew was that Calen wasn’t Calen anymore,’’ Jessie said.

Calen kept his private thoughts secret, not telling his mother about his fears that people were plotting to harm him. “It took a while to open up enough for my family to realize what exactly was happening, and then I got help,’’ he said.

Years of therapy and finding the right medication helped Calen seize moments of clarity that he could recognize as reality. He nurtured those moments until they became his enduring reality.

“He’s got a lot of guts, this kid,’’ his mother said as Calen talked about his journey.

It’s scary being known as bipolar, Jessie said, but it’s getting easier. After outing himself in the TV ads, Calen wonders if people will see him for his illness rather than his good qualities.

Mental illness is “part of the human condition,’’ former McLean president Dr. Bruce Cohen said during a combined interview with the Close family. “It’s not going to go away, so we’ve got to talk about it.’’

With growing evidence that the brain retains the ability to change throughout life, more mental health specialists are talking about the hope of recovery for people with serious psychiatric disorders. There was a time when a schizophrenia diagnosis was considered a slow death sentence of continuing deterioration, said David Shern, president and chief executive of the advocacy group Mental Health America. Now earlier detection is the goal, so people who are on course to develop a full-blown psychotic illness can receive the support, treatment, education, and skills needed to manage their serious episodes, which can cause lasting damage and make recovery slower.

“If you do that, you can really start to change the trajectory of the disability,’’ he said. “Support from family members is critical.’’

And the old we-don’t-talk-about-it Close family has now gone on TV and online, saying words that used to stick in their throats.

Where to find help

BringChange2Mind (www.bringchange2mind.org) campaigns against stigma, and offers a 24-hour phone line and other resources. The not-for-profit organization was cofounded by Glenn Close, the Child and Adolescent Bipolar Foundation, Fountain House, and Garen and Shari Staglin of the International Mental Health Research Organization.

The National Institute of Mental Health (www.nimh.nih.gov) seeks to prevent mental illness through basic and clinical research. Its site explains what psychiatric disorders are, how they are treated, and where to find services.