State to force stores to post graphic signs vs. smoking

Massachusetts is poised to become the first state in the nation to force retailers to prominently display graphic warnings about the perils of smoking right where cigarettes are sold — at tobacco sales racks and next to cash registers.

Images of ominously darkened lungs, damaged brains, and diseased teeth could start appearing before the end of the year in more than 9,000 convenience stores, pharmacies, and gas stations, if a proposal by the state Department of Public Health is approved as expected. Other posters would direct smokers to where they can get help to stamp out their habit.

Retailers who refuse to display the signs within 2 feet of tobacco displays and cash registers could face fines of $100 to $300.

A retail industry group reacted yesterday with dismay, arguing that cramped corner stores are already burdened by too many regulatory dictums.

The initiative needs the approval of the state Public Health Council — an appointed panel of doctors, disease trackers, and consumer activists — but board members yesterday expressed unequivocal support. Since the 1990s, Massachusetts has been at the vanguard of US efforts to reduce tobacco use, the leading cause of preventable deaths in the United States.

The signs are modeled on a nothing-left-to-the-imagination campaign in New York City, where signs showing the health effects of smoking began sprouting in 11,500 shops last December. Massachusetts health authorities provided copies of the New York City posters as an illustration of what their campaign will look like.

“If somebody is trying to quit smoking and they go back to the store and they’re tempted — oh, just one pack — we hope this will help them make a different choice,’’ said Lois Keithly, director of the Massachusetts Tobacco Cessation and Prevention Program.

The campaign is being underwritten by $316,000 in federal stimulus money from the Centers for Disease Control and Prevention, which will allow the state to provide the materials to retailers without charge. Because the posters will be produced by outside vendors, a spokeswoman for the state Department of Public Health said, it conforms to the intent of the stimulus law, providing jobs in a sour economy.

Graphic images portraying the damage wrought by smoking have been a hallmark of antismoking campaigns in Europe for years. But, in the United States, admonitions on cigarette packs and at stores have tended to rely on words rather than pictures.

The Retailers Association of Massachusetts has not decided how gamely it will fight the proposal, but the organization’s president, Jon Hurst, left little doubt that most shopkeepers will respond coolly to another mandate. That may prove especially true at convenience stores, where tobacco sales constitute a significant share of business.

“Do you really have to have additional graphic signage and multiple layers of it at each cash register?’’ said Hurst, whose alliance has 3,100 members. “If you warn on everything, those warnings become essentially meaningless. They already have signage on alcohol, tobacco, lottery, they have signage on price accuracy.’’

The maker of Marlboro and other top-selling brands, Philip Morris USA, said it believes warnings should be uniform nationally and established by the federal government, which has been given expanded authority over tobacco marketing.

In New York, the graphic signs have met with little resistance from retailers and consumers, said Anne Pearson, an attorney with the city’s Bureau of Tobacco Control.

“There’s a large body of evidence showing these graphic images are very effective,’’ Pearson said. “They can communicate information in a way that text just can’t, and they can also communicate a message to people regardless of their level of literacy and regardless of the language they speak.’’

The Massachusetts Public Health Council is expected to vote on the graphic posters in August, but the only misgiving members expressed yesterday was whether the campaign would be rendered in enough languages to reach the state’s increasingly diverse population.

“We need to help our immigrant populations deal with this,’’ said Dr. Michele David, a council member.

The regulations will vary, depending on whether stores have tobacco displays or, instead, keep cigarettes and other tobacco products behind the counter. The biggest signs — those displayed next to racks freighted with tobacco goods — will measure 8 1/2-by-11-inches; cash register signs will be smaller.

Regardless of the size, the intent, tobacco control specialists said, is the same: to help the 77 percent of Massachusetts smokers who say they want to quit finally do it.

“To have something there to remind them how horrible, how addictive this is, to tell them how to get help, we think it will be a very, very powerful tool for counteracting the power of tobacco advertising at the retail outlet,’’ said Eric Lindblom, policy research director at the Campaign for Tobacco-Free Kids in Washington. 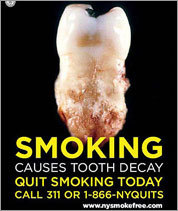