By taking small steps that add up to big changes, your family campaign to trim calories can be fun, painless, filling, and still taste good 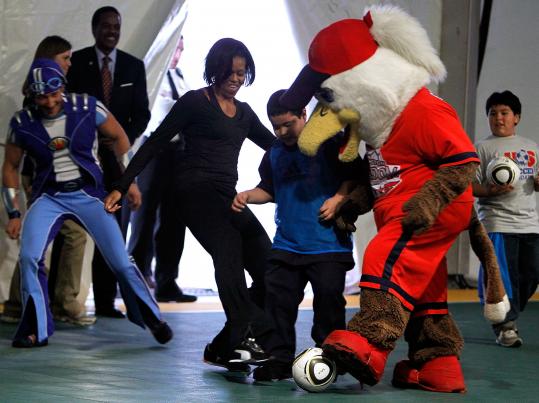 While Michelle Obama is campaigning against childhood obesity, there’s Charles Barkley on TV hawking Taco Bell’s NBA Five Buck Box. The extra-large former basketball All-Star raps about the box’s crunchy tacos and volcano burritos, but doesn’t mention the Jumbotron-size helping of fat and calories. At 1,380 calories, the box contains close to two-thirds of what a typical 12-year-old needs for an entire day. And that’s before adding 200 calories for the soft drink that comes with the meal.

“Economically, if you had just $5 to maximize your calories, that’s certainly a way to do it,’’ says Dr. Lauren Smith, medical director for the Massachusetts Department of Public Health. “When that’s your landscape, it becomes normal.’’

But as many parents know, changing what is normal in a child’s food world can be as challenging as getting them to take out the trash. There are many hurdles: School lunch programs feature fried and processed foods, sweet snacks are ubiquitous and, for many families, access to inexpensive fresh fruits and vegetables is limited. Add in reduced physical activity and parents coming home from work tired, and who has time to prepare - much less do battle over - broccoli or brown rice?

With more children overweight than ever, toddlers included, efforts are underway from the White House down to deliver a stern message about trimming excess fat and calories from daily diets. The first lady’s Let’s Move campaign takes aim at labeling laws, school cafeteria food, and food “deserts’’ - communities where fast food and convenience stores flourish at the expense of produce-stocked markets. In public appearances, Obama also highlighted the small but effective steps she took as the mother of two girls to reduce the calories in her own family’s diet: smaller portions, more home-cooked meals, no dessert on weeknights, and limiting beverages to water, low-fat milk, and fresh-squeezed juices.

“Eating healthier foods really has to become a whole family project,’’ says Leslie Song, a nutritionist at the University of Massachusetts Memorial Health Care center in Worcester. “You can’t just try to change the way the child eats, still keep junk food in the house, and expect there to be success.’’

Dawn Carlo agrees. Her daughter, Lauren, 9, is an active girl who plays several sports and enjoys lots of outdoor time. But Lauren’s weight was steadily creeping up compared with the norm for same-age girls. Carlo brought Lauren to the Optimal Weight for Life (OWL) program at Children’s Hospital Boston a little more than two months ago and the whole family is now on the mend nutritionally.

“We’ve all lost weight,’’ says Carlo, who lives in Westborough with her husband, Francis, and daughters Lauren and Allie, 12. “We all eat the same meals and the same snacks. . . . I thought we were eating healthy [before]. I thought granola bars and Wheat Thins were good snacks. Now I know better.’’

Carlo credits the staff at OWL for offering more than just nutritional advice. “They really worked with Lauren, talked to her about her self-esteem, her body image, helped her cope with the teasing.’’ Now, her mother reports, Lauren is feeling much better about herself and can even run a little faster when playing indoor soccer. She’s lost six pounds and “her confidence and self-esteem are just way up.’’

Her experience mirrors what specialists advise. Take a lot of small steps and they will add up to big differences. Don’t label some foods as “bad’’ or “forbidden.’’ Pizza and birthday cake and ice cream are just fine now and then, but keep the foods served at home as healthy as possible. Choose everyday snacks wisely and be willing to put in just a little more time to prepare foods at home.

Kids are often willing to change their habits. Sometimes it surprises the parents, as it did Carlo. “Trust me, [Lauren’s] a typical kid who would eat chicken nuggets and mac and cheese every night. If you told me a few months ago that she’d be eating Kashi cereal for breakfast, I’d have laughed,’’ says Carlo. She reports that it took little time for Lauren to embrace new foods and invest in new eating habits. “The first week was kind of hard. She was so focused on what we should be eating and how much. After about a week, she wasn’t asking, ‘What can I have now?’ ’’

Song confirms that children can make changes in their eating habits if parents are consistent. “It’s a real partnership. Have faith in them and be really consistent. They will come to realize, I can deal with this. It will be this way from now on,’’ says the nutritionist.

For most children who are overweight or obese, the goal is not to “put them on a diet,’’ advises Suzanne Rostler, a clinical nutrition specialist at the OWL clinic and coauthor of “Ending the Food Fight: Guide Your Child to a Healthy Weight in a Fast Food/Fake Food World’’ (Houghton Mifflin Harcourt). Children who learn to maintain their weight with better eating habits and additional physical activity will, for the most part, counteract past weight gain as they grow in height, she says. “From a parenting perspective, it’s about keeping a safe food environment, keeping junk food out of the house, and having the whole family eat the same way. It’s important that a child not feel punished. It’s an effort to keep the whole family healthy.’’

Rostler’s first suggestion: Encourage kids to be involved in choosing and preparing some of their meals. “Whether it’s a teenager or a toddler, cooking can be a very positive entree into accepting a variety of foods,’’ she notes. Dr. Smith agrees. Encouraging her own children to leaf through her cookbooks has made them more informed and adventurous eaters. “Sometimes, they read [food] labels more carefully than I do,’’ she says.

Taking charge of what’s stocked in the fridge and pantry is essential. “Parents have little control of what goes on in terms of eating outside their house; at school, at a play date, at the mall,’’ says Rostler. “You do have control over what comes into your home. It really is number one in my mind and it can work regardless of income, regardless of the age or gender of the child, regardless of anything else really.’’

Some of the small steps that Rostler and others suggest is to offer children low-fat milk and water, as the Obamas do, which means no sodas in the house. Also, healthier snacking is key. Kids can be ravenous when they return home from school, a music lesson, or a sports practice. “They will eat whatever is there, whatever is easy to grab, so make it healthy,’’ says Song. Having a little protein with each snack and meal will help keep hunger at bay. A handful of nuts, slices of low-fat cheese, or lean sliced deli meats are easy alternatives to chips, cookies, and crackers.

Another strategy is to eat together as often as possible at home, using weekend time to prepare a few meals in advance, and limiting trips for fast food. Smith acknowledges that many parents don’t have easy access to the best foods, but notes that putting a healthy meal on the table doesn’t necessarily mean “shopping at Whole Foods.’’ Focus on the “perimeter’’ of the supermarket, favoring fresh fruits, vegetables, lean meats, and dairy products over “center aisle’’ food staples such as boxed macaroni and cheese, canned soups, crackers, and cookies. Frozen vegetables and fruits, without added sauces or syrup, are excellent alternatives during the months when fresh produce in New England is limited.

If pasta is on the menu two or more times per week, have it less often and experiment with whole wheat pastas (or mix regular and whole wheat varieties to ease the healthier version onto the table). Treat the family to ice cream once on the weekend, rather than keeping it on hand in the freezer. When fast food is the only option, look for the healthiest items on the menu.

Perhaps the most comforting words come from Smith, a mother, a pediatrician, and a state health leader. “Your home doesn’t have to be the perfect food environment. You’re setting yourself up for failure if you feel you have to do everything right, right away,’’ she says.

Her advice for parents struggling with this: “They don’t have to be perfect.’’