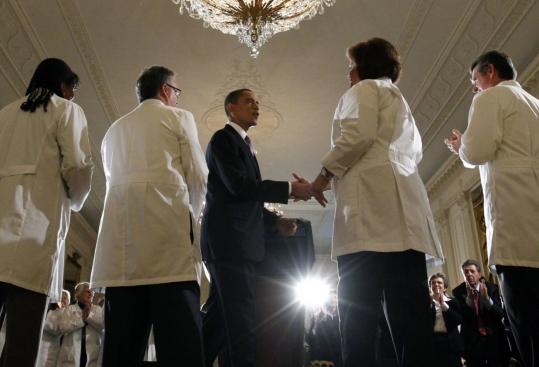 President Obama called on congressional Democrats to pass his health care overhaul package over the objections of Republicans yesterday, saying the issue has been thoroughly debated. “I do not know how this plays politically, but I know it’s right,’’ he said. (Kevin Lamarque/ Reuters)
By Susan Milligan Globe Staff / March 4, 2010

WASHINGTON - President Obama increased the pressure on Congress yesterday to take an up-or-down vote on his health care package, calling on Senate Democrats to bypass a Senate filibuster and revive the stalled legislation over the objections of Republicans.

Despite polls that signal that strategy holds dangers for Democrats, the president is gambling that the voters who sent him to office want action on health care and share his impatience with inaction in Washington.

“I do not know how this plays politically, but I know it’s right,’’ Obama said, adding that he would leave it to pundits and others to speculate on how muscling through a bill would affect Democratic fortunes in the fall congressional elections.

The president did not utter the words “budget reconciliation,’’ shorthand for the parliamentary tactic used to attach legislation to a budget bill that can pass by a simple majority of 51 votes, rather than the 60 needed to overcome an expected GOP filibuster. But his demand for the controversial option was clear, and many Democrats consider it their only hope to pass a sweeping health care overhaul.

“We have debated this issue thor oughly, not just for the past year but for decades,’’ the frustrated president told an assemblage of sympathetic invited guests - some of them in white lab coats - at the White House.

Obama ticked off a variety of other initiatives that previously have been passed by majority parties using budget reconciliation in the Senate, including welfare reform and tax cuts.

Despite precedent, it remained unclear yesterday if leaders in Congress have the will or the votes needed to push a bill through either chamber, or if leaders were ready to risk the potential wrath of voters in their home states.

Obama’s comments, the strongest public tactical direction he has offered in the 15-month battle over health care overhaul, were welcomed by Democrats, some of whom have been grousing privately that Obama needed to show more leadership. Republicans routinely use the filibuster to stall legislation and nominations, even noncontroversial bills, said Senator Sheldon Whitehouse, Democrat of Rhode Island.

“This is just a dead-end road to keep going down,’’ Whitehouse said. While using reconciliation takes away a protection for the minority party, “when you do hit a new low, it is sometimes an opportunity to hit the reset button.’’

But Republicans insist that Democratic incumbents will be punished at the ballot box if they resort to budget reconciliation to win such a large and controversial government program. Proponents of the filibuster rules say it is an important check on majority power in Washington.

“They’ve had enough of this yearlong effort to get a win for the Democratic Party at any price to the American people,’’ Senate Republican leader Mitch McConnell of Kentucky said on the Senate floor.

Some Democrats are worried about being portrayed as abusers of the rules, a charge they used successfully against Republicans in previous elections. But they are equally concerned about going home empty-handed, with no health care bill to show for their work. Many want to focus on jobs, which Democrats believe will be the critical issue in the fall election campaigns.

To proceed on health care, Democrats in the House and Senate must untangle a political and procedural knot. Senate Democrats passed a health care bill Christmas Eve, but it is different from the package the House had approved earlier.

Lawmakers in January had been working on a compromise measure that would have merged the two bills, then have to be passed by both chambers. But because Republican Scott Brown’s victory in the election to fill the seat vacated by Senator Edward M. Kennedy denied Democrats a crucial 60th vote they would need to overcome a Republican filibuster, the House is now being asked to pass the Senate’s bill whole, with a promise that the Senate will then pass corrective legislation using reconciliation.

The House majority leader, Maryland Democrat Steny Hoyer, acknowledged that it would take a leap of faith for House Democrats to vote in favor of the previously approved Senate bill, based on a promise of a successful simple-majority budget vote in the Senate.

“We’re working on having that faith verified,’’ he said, when asked if he had the votes.

Further aggravating the negotiations is a growing resentment of the Senate by House members, who feel they passed controversial pieces of legislation last year - a climate bill, a Wall Street regulatory overhaul, and health care - only to have them languish in the Senate.

“We’ve passed about 290 bills here on spec. We’re about done with that,’’ said Representative Anthony Weiner, Democrat of New York, referring to the stack of House-passed measures the Senate has yet to approve. Members of the Senate should “get off their high horse and pass some of these bills,’’ Weiner said.

Obama yesterday enumerated what he sees as the benefits of reform - new curbs on the insurance industry, broader coverage, reducing premiums - a list apparently meant to provide Congress with a moral foundation for speedy action, and a rationale for the bill to an American public that has witnessed a yearlong contentious debate.

The president emphasized the need to change many rules at once because of the interlocking nature of proposed insurance reforms, and to require that people purchase insurance, which is expected to expand coverage to 31 million people who lack it now.

Obama also said he had adopted some ideas to reduce medical fraud and waste, proposals put forth by Republicans at an extraordinary summit meeting between Obama and leaders from both parties last week.

“It is like putting a new rear-view mirror on an Edsel,’’ Gregg said. “It doesn’t change the fact that the underlying bill is a failure of policy.’’

Obama is planning to wage an intense battle in coming weeks, with health care speeches scheduled in Philadelphia and St. Louis, both in states with contested Senate seats.

Representative John Tierney, Democrat of Salem, said Obama needs to continue using his bully pulpit to explain to the American people why the procedural tactic is necessary. Otherwise, Democrats may indeed suffer politically, he said.

“Unless he does that,’’ Tierney said, “it’s going to be difficult to get some members to move.’’