Aboard the Comfort, medical workers, many from Massachusetts, fight to bring healing and compassion to desperate Haitians 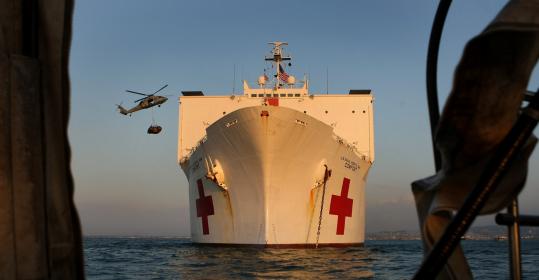 The ship, anchored off Port-au-Prince, is the last hope of survival for many of the quake?s most seriously wounded. (David L. Ryan/globe staff)
By Brian MacQuarrie Globe Staff / February 6, 2010

ABOARD THE USNS COMFORT - David Louizar, an 8-year-old survivor of the Haiti earthquake, lay dazed in his bunk in this floating Navy hospital, his right arm and right leg amputated and a piece of flesh grafted onto the gaping hole where his nose had been.

Dr. Marjorie Curran, a pediatrician from Massachusetts General Hospital, spoke quietly with David and his father, checking on the stunned and broken boy whose slow but probable recovery is the product of luck and medical mastery amid the hell that has devastated Haiti.

Trapped under his crumpled house, David had been freed and flown by helicopter to this state-of-the-art ship that now provides the best medical care in Haiti.

Anchored 2 miles off Port-au-Prince, it is the last hope of survival for many of the quake’s most seriously wounded.

For Curran and dozens of other medical workers from Massachusetts who volunteered their services aboard the Comfort, the work has been intense, draining, satisfying, and heartbreaking. Babies have been born, patients have died, and excruciating decisions have been made about who can be saved and who will be left ashore to expire from untreatable wounds.

“The operating rooms have been going 24 hours a day,’’ said Curran, a 47-year-old from Needham, Mass., who stopped midsentence to collect her emotions while speaking of David’s agonizing ordeal.

Three days after the quake, outside the rubble of his home, David’s father called his son’s name - a parent’s hopeful reflex despite the staggering odds. Amazingly, Fanord Louizar heard an answer, his son was dug out, and the road to recovery began.

Now, Curran is looking ahead to discharging David, who should heal physically but still faces a daunting future as a disabled child in an impoverished land.

Victories like this are occurring every day aboard the Comfort, where the Massachusetts volunteers and others are working as part of Project Hope, which delivers emergency health care and humanitarian assistance around the world. The ship, the length of three football fields with 12 operating rooms and a crew of 1,200, is a veteran of Hurricane Katrina and the Sept. 11 attack on New York.

Since arriving off Port-au-Prince on Jan. 21, patients and medical supplies have been airlifted to the Comfort in a near-continuous march of relief. Doctors and nurses had treated 776 patients through midnight Thursday and operated on 566 of them.

Dr. Larry Ronan, a Mass. General internist, worked with the Navy to plan the mission and sailed aboard the ship from its home port of Baltimore to Port-au-Prince.

“For a doctor, we need to be down there,’’ said Ronan, who is also the Red Sox team physician. “We need to let our neighbors know that in times of need, we’ll be there.’’

That sense of duty is shared by Kristin Sullivan, a nurse at Children’s Hospital Boston, who sat near a 6-week-old infant whose brain had been exposed when her home crashed down around her.

“This is the first time I’ve sat down in a chair all day,’’ said Sullivan, 29, as she monitored the child’s vital signs at mid-afternoon Thursday. “But every time I want to feel sorry for myself, there’s someone else who has it worse.’’

In the morning, a girl had died in the next bed.

“She was doing fine, and then she began having spasms,’’ said Sullivan, a Charlestown resident who volunteered with her boyfriend the day the earthquake hit. “It makes me sad, it makes me cry, but you have to move on and take care of the next patient. You have to be hopeful for them.’’

Within minutes, Sullivan rushed across the intensive-care unit to the bed of a 6-year-old girl who suddenly had developed respiratory failure. A hastily gathered cluster of doctors and nurses, including Jennifer Garrity of Mass. General, forced air into the child’s lungs as they watched her heart rate drop.

The bewildered mother, eased away from the bedside by a health worker, put a hand to her mouth as the child struggled for life.

“It’s been eye-opening for all of us,’’ said Garrity, 30, of Watertown, Mass., as she compared the cases she has seen in Haiti and at home. There are gaping head wounds and massive infections, including tetanus - a horrid germ that invades deep wounds and is virtually nonexistent in the United States because of widespead vaccination. Many of the children, attached to intravenous lines and noisy ventilators, were orphaned by the quake.

Captain Richard Sharpe, a trauma surgeon on the Comfort, said the severity and scope of the injuries dwarf what he witnessed in four deployments to Iraq and Afghanistan.

“It’s on a scale I’ve never seen before,’’ Sharpe said. “There are so many patients of such a high acuity level.’’

Particularly during the first days after the Comfort arrived, hard choices had to be made about who would be brought to the ship.

At helicopter landing zones where the catastrophically injured had been gathered, Sharpe made battlefield-like assessments about whether a victim was on an irreversible path toward death.

If death were certain, the victim would be passed over in favor of another patient whose wounds might heal.

Pain medication could be given to the unfortunate, Sharpe said, but little else was possible in a place whose shattered, struggling hospitals had been overwhelmed.

“All your assets have to be focused on those who can survive,’’ Sharpe said. “I’ve made these decisions before, and I can’t imagine this changing: They’re the most difficult I have ever had to make.’’

For the Massachusetts volunteers, who will spend about three weeks aboard the Comfort, the relentless work continues.

Sitting in the pediatric intensive-care unit, off her feet for a few minutes, Sullivan watched a young Haitian couple who cradled their 6-week-old child, the infant’s tiny body covered with tubes and monitors.

The ship offers the health workers scant refuge from the suffering. They retreat to the deck, from which the aqua-colored bay and nearby Haitian coast seem a benign, tropical paradise.

The doctors and nurses and their patients know otherwise.

“We leave here, go out to the fantail, and talk of other days,’’ Sullivan said.