Consider options to save legislation if Brown wins vote 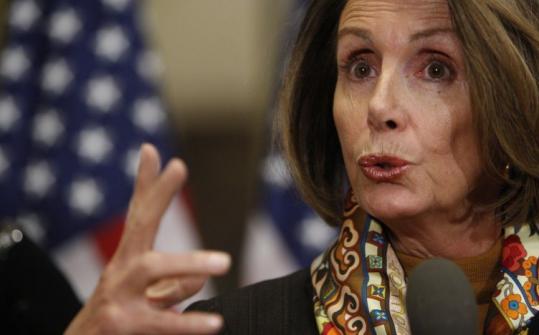 WASHINGTON - The White House and Democratic congressional leaders, scrambling for a backup plan to rescue their health care legislation if Republicans win the special election in Massachusetts today, have begun laying the groundwork to ask House Democrats to pass the Senate version of the bill, which would send the measure directly to President Obama for his signature.

A victory by Republican Scott Brown would deny Democrats the 60th vote they need in the Senate to surmount Republican filibusters and advance the health legislation. And with the race too close to call, Democrats are mulling several options to save the bill, which could be a major factor in how they fare in this year’s midterm elections.

Some Democrats suggested that even if their candidate, Martha Coakley, scrapes out a narrow victory today, they might need to ask House Democrats to speed the legislation to the president’s desk, especially if lawmakers who previously supported the bill begin to waver as they consider the political implications in a tough reelection cycle. It is unclear whether rank-and-file Democrats would go along.

Even as Democratic leaders pondered contingencies, the House speaker, Nancy Pelosi, insisted that the legislation would move forward, though she acknowledged that today’s election results could force a tactical shift.

“Certainly the dynamic will change depending on what happens in Massachusetts,’’ Pelosi told reporters in California yesterday. “Just the question of how we would proceed. But it doesn’t mean we won’t have a health care bill.’’

“Let’s remove all doubt,’’ she added. “We will have health care one way or another.’’

Still, some lawmakers, aides, and lobbyists described numerous obstacles to House approval of the Senate-passed bill.

In an interview yesterday, Representative Bart Stupak, Democrat of Michigan, who opposes the Senate bill in part because of provisions related to insurance coverage of abortions, said, “House members will not vote for the Senate bill. There’s no interest in that.’’

When the idea was suggested at a meeting of the House Democratic Caucus last week, Stupak said, “it went over like a lead balloon.’’

“Why would any House member vote for the Senate bill, which is loaded with special-interest provisions for certain states?’’ Stupak asked. “That’s not health care.’’

In addition to his concerns about the abortion provisions, Stupak said the Senate bill would not do enough to improve the quality of health care, and it would preserve the federal antitrust exemption for health insurance, which would be repealed under the House bill.

Officials at both ends of Pennsylvania Avenue emphasized that the backup plan was hypothetical and that they hoped it would never be needed.

Many Democrats, eager to exude confidence, declined to comment publicly on the possibility of a Plan B.

A House Democratic leadership aide said, however, “Obviously, the outcome of Tuesday’s election will be a factor in how we move forward, but we are hopeful and continue to work towards a compromise that will garner 60 votes in the Senate. If we end up short of 60, we will need to see. But there will be problems with just taking up the Senate bill.’’