THIS STORY HAS BEEN FORMATTED FOR EASY PRINTING
Sound body

As public schools in Massachusetts calculate and report body mass index scores for students, the hope is that families will take steps to fight obesity and avoid the serious health problems linked to it 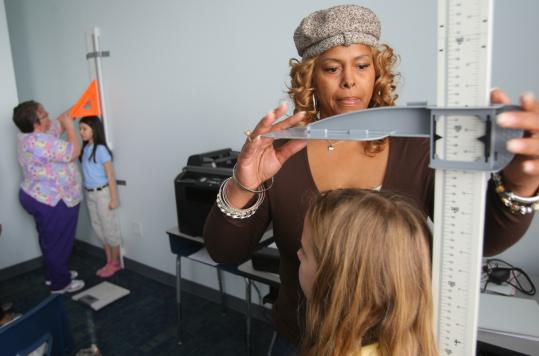 Students in Little Rock, Ark., are weighed and measured to determine body mass index, as part of a campaign similar to the one ramping up in Massachusetts. (Benjamin Krain for The Boston Globe)
By Stephen Smith Globe Staff / January 18, 2010

When a child gets a report card besmirched with lousy grades, no caring parent would ever dream of bellowing, “You’re a dummy!’’

So in a world of super-sized temptation, similar sensitivity will be warranted as every public school in Massachusetts during the next 18 months evaluates whether students weigh too much or too little. It is not, specialists pleaded, a matter of a child passing or failing the fat test.

Instead, as students are weighed and measured, their resulting body mass index scores can open windows into family dining and exercise habits - and spur parents and children alike to think about eating better and exercising more, so they can potentially avert the diseases that are the legacy of obesity.

“If there’s a lot of conflict and the parent opens this report and says, ‘In addition to the bad grades, now you’re overweight,’ that’s not going to work,’’ said Dr. Alan Meyers, a Boston Medical Center pediatrician. “Where I have seen the most success in kids is when a parent takes it on, and they say, ‘Geez, this makes me worried about you - I don’t want you to get diabetes like Uncle Joe. We’re going to do this together.’ ’’

Public health regulators last year mandated that all public schools in the state should begin calculating what’s commonly known as BMI for students in the first, fourth, seventh, and 10th grades. It was a main pillar in a major campaign to combat obesity introduced by the administration of Governor Deval Patrick.

The state’s push to conduct screenings is expected to accelerate later this month, Massachusetts Public Health Commissioner John Auerbach said, as school nurses hand out their last rounds of swine flu vaccine, freeing up time to conduct the weight screenings. The requirement to calculate BMI is being phased in this school year and next.

A 2007 survey discovered that 26 percent of Massachusetts adolescents weigh too much. The findings are evident in the offices of pediatricians, who are diagnosing diseases in children such as type 2 diabetes that once were the near-exclusive province of adults, and prescribing medications such as cholesterol-lowering drugs once giv en only to their parents.

“Unfortunately, I would have kids when I was at Boston Medical Center who weighed 160 pounds at age 8,’’ said Dr. Lauren Smith, medical director of the state Department of Public Health. “We can’t look the other way. It’s going to come back to haunt us over the next decade and the two and three decades after that as these children become adults and develop the predictable but preventable chronic illnesses that are associated with obesity.’’

And even though studies released last week suggest that the prevalence of obesity appears to have plateaued among US children and adults, that only means a high peak isn’t getting higher. Federal researchers found that nationally, two-thirds of adults and nearly one-third of children and teenagers are overweight or obese.

“It’s not solely a medical problem - it’s a family, societal, and educational issue,’’ said Dr. Elizabeth Goodman, director of child and adolescent obesity programs at Tufts Medical Center. “All the domains of a child’s life feed into a child’s weight status.’’

That is why, Goodman and other specialists said, such a complex problem deserves an equally nuanced response from families.

Schools are supposed to notify parents before the screenings are conducted, in part to give them the opportunity to opt out. But it also allows parents and their children to discuss why the measurements - which nurses are told to perform discreetly, not revealing to students on the spot their scores - are being done.

“Parents want to keep it in very simple language and concise,’’ said Allison Lauretti, a psychologist with the Optimal Weight for Life program at Children’s Hospital Boston. “They can say, ‘This is just another way of schools letting Mom and Dad know how you’re growing,’ likening it to hearing and vision screens.’’

And what about the conversation around the dinner table the evening following the screening?

“I wouldn’t necessarily make an extended conversation about it,’’ Lauretti said. “They could just check in to see what was it like, in a very open-ended kind of way.’’

For many students, being weighed and measured by the school nurse won’t seem new at all. In many schools, it’s been going on for years. What will be different for many students is the translation of those measurements into BMI, which ranges along a curve that takes into account a child’s growth with age.

The reports will be mailed from schools directly to parents. When they arrive, specialists said, there’s one thing families definitely should not do: There should be no hectoring comparisons between siblings or the kids down the block.

And, whatever the results, parents should respond with concern, not alarm.

“We shouldn’t ramp up the emotional content of the conversation,’’ said Goodman, of Tufts Medical Center. “When you get your cholesterol screening or your blood pressure screening, there’s not emotion tied to that. We should be viewing this in the same way.’’

That means not taking action based on a single score. Instead, if a school BMI report suggests reasons for concern, parent and child should consult with a pediatrician. If the doctor confirms that a problem exists, then the BMI report - much like a cholesterol reading - can serve as a starting point on a road map toward better health.

“The focus really shouldn’t be on BMI screening itself - it should be on healthy living,’’ said Anne Sheetz, director of school health services for the Department of Public Health. “The focus shouldn’t be on the BMI numbers, because they’re not going to be good.