Nelson clinches it but warns against concession cuts 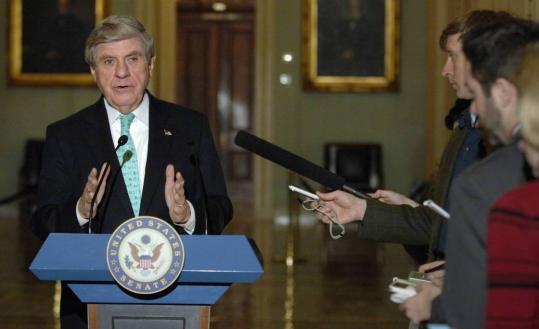 Senator Ben Nelson, a Nebraska Democrat and a crucial holdout in a deal, talked to reporters yesterday in Washington about a compromise for his vote on health care legislation. (Jonathan Ernst/ Reuters)
By Lisa Wangsness Globe Staff / December 20, 2009

WASHINGTON - Senate Democrats clinched the final 60th vote required to push a major health care bill through the Senate by Christmas, announcing a compromise yesterday with Senator Ben Nelson of Nebraska that includes restrictions on abortion coverage and millions in additional Medicaid funding for his state.

Nelson warned he would oppose the bill if those concessions are eliminated during negotiations with the House, which passed its own measure last month. But after months of raising doubts about virtually every part of the proposal, Nelson - whose outsize influence as a critical swing vote also helped keep a government-run insurance plan out of the proposal - said he could now vote yes.

“Change is never easy,’’ he said. “But change is what’s necessary in America today.’’

Under the revised Senate bill, women who qualify for government subsidies under the healthcare overhaul, and who choose to buy insurance that covers abortion, would have to make two separate premium payments - one for the portion of the premium that covers abortion services, and one for the remainder of the premium. Insurers would have to keep the money separate and pay for abortions only using the dedicated funds. The idea is to create a “firewall’’ that separated federal subsidies from private payments so federal money would not indirectly subsidize abortion.

The deal was announced yesterday just after the Senate gathered for an unusual 7:20 a.m. vote on defense spending in the midst of a blinding snowstorm. The timing was the result of Democrats’ determination to hustle the health care bill through by Christmas despite Republican attempts to stall. Democrats are concerned that if they leave the vote till January, their fragile coalition might tear.

Washington, D.C., infamous for not handling snow well, virtually shut down in yesterday’s whiteout; in a muffled city, the Capitol seemed like the only hive of activity. Before dawn, senators began arriving at the Capitol clad in earmuffs and boots. Senator Chuck Grassley, Republican of Iowa, opted to camp out in his Senate office Friday night rather than return home to Virginia.

“Considering blizzard Lots of colleagues here on time,’’ Grassley tweeted at 7:22 a.m. “Ovrnite in office so I cld b here.’’

If Republicans insist on taking all the debate time allowed under the parliamentary rules, the Senate will complete voting on health care in a series of four votes beginning at 1 a.m. Monday and ending at around 7 p.m. on Christmas Eve. Despite the inconvenience and the Democrats’ apparent lock on victory, neither party seemed willing to give up the game of political chicken.

“We’re not going home,’’ declared Senator Lindsey Graham, Republican of South Carolina. “We’re going to talk about this until Christmas Day so the American people know the truth about what’s in this bill.’’

Educating the public, however, was not necessarily the goal of Republicans’ decision to force a full reading of the 375-page final deal on the floor yesterday, a process that took about eight hours and, it seemed safe to say, was of little use to Americans watching on C-SPAN.

But at least one Republican who had negotiated for months with Democrats expressed great frustration and disappointment yesterday that the Democrats were rushing to pass a massive bill without allowing time for vetting it.

“Were rushing pell-mell to a Christmas break . . . on a bill that isn’t going to be implemented until four years from now, 2014,’’ said Senator Olympia Snowe of Maine. “And the American people understand that intuitively. They’re rightfully and logically asking, ‘What’s the rush?’ ’’

Democrats, though, insisted that it was time to move ahead.

“This bill will do so many good things for so many people,’’ said majority leader Harry Reid.

The abortion compromise reached with Nelson, who strongly opposes elective abortion, promises to be hotly debated in the weeks ahead. The issue centers on how to apply a longstanding prohibition on paying for elective abortions with federal funds to a new regime where people who qualify will receive federal subsidies to help them afford private insurance. The House bill bars any insurance plan from covering abortion if it accepts anyone using federal premium subsidies. The Senate bill would set up the dual payments - creating a barrier between private and federal sources of money when it comes to abortion.

“My goal was to try to reach some compromise where the basic premise was we would separate federal funds from private funds,’’ said Senator Barbara Boxer, an abortion rights champion who participated in the talks with Nelson. “I think we achieved that.’’

Activists on both sides reacted with disgust to the Senate compromise. The National Right to Life Committee said it amounted to using federal dollars to pay for “abortion on demand.’’ NARAL Pro-Choice America called it “unacceptable’’ because it would place “great new administrative burdens’’ on women and insurers. Representative Bart Stupak, Democrat of Michigan and who led the faction that pushed for the abortion coverage restrictions in the House bill, also said the Senate deal was a no-go.

State Attorney General Martha Coakley, a Democratic candidate for US Senate in the Jan. 19 special election to fill the late Senator Edward M. Kennedy’s seat, said during the Democratic primary campaign she would not support the House bill because of its abortion restrictions. A spokesman said yesterday she was reviewing the details of the new compromise.

Nelson secured several other concessions from Reid, including a guarantee that the federal government will fully cover the cost of expanding Nebraska’s Medicaid program. All other states have to partially pay for a Medicaid expansion to admit all adults earning up to 130 percent of poverty level, if they haven’t done so already. Aides said the deal was worth under $100 million for Nebraska over the next decade - not much in the context of an $900 billion bill. But at a time when most state budgets are deep in the red, it’s a huge political coup for Nelson.