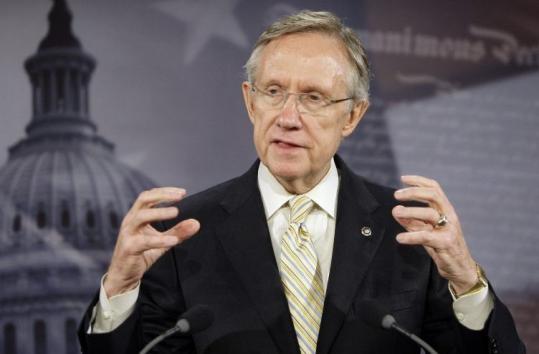 WASHINGTON - The Senate’s health overhaul bill will include a government insurance plan to compete with private companies, majority leader Harry Reid said yesterday, giving new life to a contentious idea that has divided the country and members of Congress who are wary of government involvement in health care.

The proposal, the product of intense negotiations to reconcile two disparate Senate committee bills, would allow states to opt out of the public plan, a concession to conservative Democrats who fear that the government plan would have an unfair advantage over private insurance providers.

“I think it is the fairest way to go,’’ Reid told reporters. His decision represents a remarkable comeback for an idea that appeared nearly dead in late summer.

Underscoring the extreme difficulty of reaching consensus on one of the most controversial aspects of the health overhaul, however, an aide to Reid acknowledged the majority leader has not yet nailed down commitments from all 60 Democrats. Democrats need 60 votes to thwart a Republican filibuster. Reid appears to be calculating that liberals have made enough sacrifices on the health care proposals already, and that no moderate Democrats are so opposed to a public option that they would join Republicans in blocking a vote - especially if the opt-out provision offers a political escape hatch.

But by choosing the opt-out over Maine Senator Olympia Snowe’s alternative “trigger’’ proposal - which would automatically offer a public insurance plan in states where private insurers fail to offer affordable prices - Reid has clearly alienated his most likely GOP ally.

Snowe, the only Republican who voted for the Senate Finance Committee’s version of the bill, has long said she would support a public option only as a last resort; yesterday, in a statement, she pronounced herself “deeply disappointed’’ with Reid’s plan. She and others will have a chance to amend the bill when it reaches the Senate floor - presumably early next month, after the Congressional Budget Office evaluates it.

Reid’s announcement strengthened House Speaker Nancy Pelosi’s hand as she seeks to corral support from conservative Blue Dog Democrats, some of whom have expressed a reluctance to proceed if senators were not going to join them in taking a politically risky vote. Liberal groups appeared pleased.

“We applaud Senator Reid’s leadership in standing up to the special interests who are trying to kill the public option outright, or through mechanisms like a ‘trigger,’ ’’ said Justin Ruben, executive director of MoveOn.org Political Action, the online liberal group.

Jacob Hacker, a political scientist at Yale University who is considered the originator of the public option idea, said: “As compromises go, it’s a good one, preserving the essential idea that there should be a national public plan competing with private insurance and pressing private insurers to improve their value.’’

Details of the proposal remained unclear yesterday. Reid would not say who - governors, state legislators, or voters - would decide whether a state would opt out. It was also not clear how long each state would be in the program initially. Reid said states could begin opting out in 2014, a year after aides said the public option would begin operating, but aides would not answer detailed questions.

While the Democrat-controlled House is expected to include a public option in its final bill, the Senate has been more skeptical, especially after activists derided the idea during raucous town meetings in August.

Support for the public option looked dim for months in the Senate. With big business, the insurance industry, and conservative groups allied against it, a handful of Democrats from conservative states opposed the idea.

Though the left-leaning Senate Committee on Health, Education, Labor and Pensions had a public option in its bill, the Senate Finance Committee voted down two proposals to include one two weeks ago.

But the momentum appeared to be shifting even then. Insurers issued a widely criticized study of the Senate Finance bill suggesting that premiums would skyrocket if the bill passed - giving public option proponents a crucial opening to argue the public needed an alternative to private carriers.

“Our argument became resurgent after August. We took the best shots of the critics, and the American people seemed to clearly favor action,’’ said Representative Richard E. Neal, Democrat of Springfield and a member of the Ways and Means Committee, which authored one of the House bills.

Liberal groups also campaigned furiously for the public option and against the trigger, which they said would give the insurance lobby time to keep fighting a public plan and possibly smother it before it took effect. The Progressive Change Campaign Committee ran a tough ad in Nevada, where Reid is facing a difficult reelection campaign in 2010, in which an exhausted-looking underinsured nurse says, “I’m watching to see if Harry Reid is strong and effective enough as a leader to pass a public option into law.’’

The left would prefer a stronger public option, available to all Americans with doctor payment rates linked to Medicare reimbursement rates. But advocates for a health care overhaul warned activists that they must compromise to avoid having the legislation implode.

“Anybody who wants to make progress is going to understand that you can’t make your own version of the perfect be the enemy of reasonable improvements to our health care system,’’ said Ron Pollack, president of Families USA.

Although Reid has not provided details of what he is proposing, under other versions of the public option, the government plan would be available only to people who cannot get insurance through work and to employees of some small businesses. It would compete with private insurance plans, and like private insurance, it would not be free. People who qualify for government help could use subsidies, offered on a sliding scale based on income, to help pay for either private or public coverage, but they would have to cover the remaining cost themselves.

The Senate HELP commitee version would require the government to negotiate payment rates with hospitals and doctors rather than tie payments to Medicare rates. But it could take advantage of its size to bargain for low prices and minimize administrative costs.

Reid’s plan would also allow states that wish to establish private nonprofit insurance “co-ops’’ to do so - but only if they also offer a public option.