Delays adding to fears on H1N1 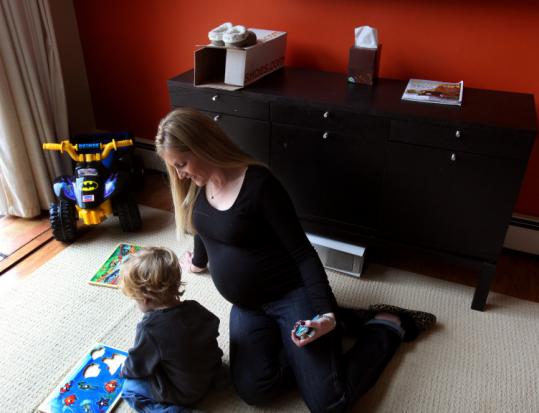 Jennifer Hagerman of Wrentham hasn’t been able to get herself or her 2-year-old son Kian vaccinated against H1N1. (Michele McDonald/ Globe Staff)
By Elizabeth Cooney Globe Correspondent / October 27, 2009

Jennifer Hagerman, nine months pregnant, is willing to go just about anywhere to get the swine flu vaccine.

Pregnant women face a heightened risk of complications from the illness and are among the first in line for the vaccine, but Hagerman has been unable to get the shot from her obstetrician. So she called her mother, who works for the New York State health department. “I don’t care if I have to drive there,’’ she said. She tried her mother-in-law, a nurse in Colorado who has inoculated hundreds. No luck.

Swine flu is now widespread in the state, but Massachusetts has received only about 400,000 doses of the H1N1 vaccine, according to Dr. Lauren Smith, medical director of the state Department of Public Health. That’s far less than what it expected to have available by now and not nearly enough for the estimated 840,000 people at high risk, including young and chronically ill children as well as pregnant women.

Across the state, doctors’ offices are swamped with calls from worried mothers-to-be, some seeking the swine flu vaccine and others asking questions about its safety.

“We’ve had tons of calls. Tons, for the last three weeks,’’ Pat Barylick, practice administrator for Newton-Wellesley Obstetrics & Gynecology, said yesterday. “Pregnant ladies are very anxious, as they should be.’’

Vaccine has arrived 100 doses at a time, she said. So far the practice has inoculated 300 pregnant women, after requesting 600 doses this summer.

State health authorities are steering as many doses as possible to pregnant woman, but it’s not a simple matter.

Deliveries of swine flu vaccine vary in content. There are small doses appropriate for toddlers, for example, and the nasal spray is for adults under 50 with no health problems and who are not pregnant. Some multidose vials contain a mercury-containing preservative called thimerosal; prefilled syringes come without thimerosal. Some patients object to this ingredient despite research that has found no link between thimerosal in childhood vaccines and neurological disorders. Each day’s shipment can include a mix.

The US Centers for Disease Control and Prevention allocates daily shipments to the states, which then match what they receive to health care providers who have registered their needs. Doses are then shipped directly from a federal contractor to doctors’ offices, hospitals, or other health care providers.

“We’re not at all in control over what is available. It just pops up,’’ Smith said. “Depending on which formulation, we have to make different judgments about where those doses go. All the doses are not interchangeable.’’

At Harvard Vanguard Medical Associates, where Hagerman receives her prenatal care, the director of infection control has pleaded with the state for a clearer picture of how and when vaccine is distributed.

“I would love for them to say we are allocating it to obstetricians and pediatric providers in blocks proportionate to their size,’’ Dr. Benjamin Kruskal said yesterday. “We have 400,000 patients and we’ve gotten 3,600 doses. Our high-risk population for H1N1, by CDC guidelines, is 206,000 people.’’

At any time, about 3,000 of those Harvard Vanguard patients are pregnant women. They are vulnerable for two reasons. During pregnancy, a woman’s immunity is lower so her body does not react to her fetus as foreign tissue. Pregnant women are also likely to be at risk for what health specialists are calling a “young person’s disease.’’

Dr. Erin Tracy, vice chairwoman of the Massachusetts section of the American Congress of Obstetricians and Gynecologists, said her colleagues have had to gear up quickly for giving vaccinations, a service more typical for internists than obstetricians.

“It’s a challenging time,’’ she said Friday, just before a swine flu vaccine clinic at Massachusetts General Hospital. “We all get doses in different shipments. We run out as quickly as we get them, but they keep arriving.’’

Hagerman is still waiting, worried that she will not be able to protect herself or her newborn - due Nov. 10 - if she doesn’t get vaccinated soon. The 31-year-old Wrentham resident is also concerned about her young son.

“I have a 2-year-old and he hasn’t been able to get vaccine,’’ she said. “We are all kind of susceptible.’’

“I understand the frustration of the providers and the women,’’ the Department of Public Health’s medical director said. “The allotments we’re able to send out haven’t been as large as would meet the demand for them.’’

But Smith said she was also heartened by a fact.

“Traditionally only about 1 in 7 pregnant women have gotten the seasonal flu vaccine,’’ she said. “That we have created demand for this vaccine is actually really important.’’

Elizabeth Cooney can be reached at lizcooney@gmail.com.