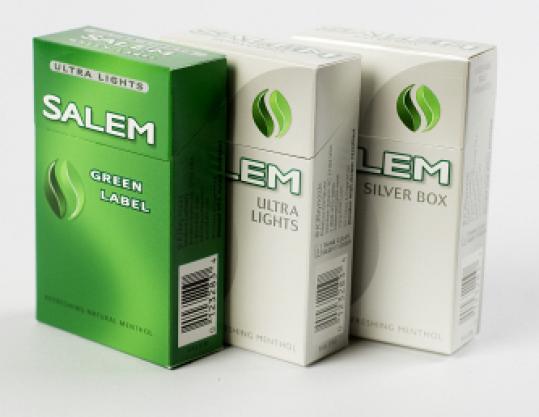 With the new branding, and use of hues shown to evoke feelings of smoothness and health, a leading tobacco company has revealed a subtle sales strategy for an era of unprecedented federal oversight: Let the colors speak to smokers in the same way the soon-to-be-banned words “mild,’’ “light,’’ and “ultralight’’ did.

Harvard researchers and other tobacco control specialists see in the new monikers and lighter, brighter palettes evidence that cigarette producers are intent on subverting a new law that empowers the US Food and Drug Administration to regulate tobacco companies - including a provision that as of next June 22 will banish words that promote certain cigarettes as safer.

Tobacco control specialists have long harbored particular contempt for “mild’’ and “light’’ cigarettes, arguing they manipulate smokers into thinking those brands are less harmful when there’s no scientific evidence to support that claim.

R.J. Reynolds Tobacco Company, maker of the Pall Mall and Salem brands, denies attempting to bypass the law and says it is merely seeking to guide customers to their favorite brands.

But researchers said they recognize the packaging changes as a tactic the industry has rolled out in other countries with stringent tobacco rules. Studies conducted in Canada and the United Kingdom, which both have a longer history of restricting tobacco industry marketing, found that smokers believe products labeled as “silver,’’ “gold,’’ or “smooth’’ are safer and easier to stop using than high-octane cigarettes.

“These tricks are now well-established,’’ said Stanton Glantz, a tobacco control specialist at the University of California, San Francisco. “The real question for the FDA is, are they going to let them get away with these shenanigans?’’

FDA spokeswoman Kathleen Quinn said her agency was aware of changes being made to cigarette packaging and intends, before the labeling ban goes into effect, to “thoroughly review the use of descriptors, including the use of color.’’

Reynolds, the nation’s second-biggest cigarette company, makes no secret of its reason for altering the packaging. Company spokesman David Howard cited both the impending federal regulation and a federal court ruling - currently on hold - that would also expunge the mild and light names.

“By using designations such as colors,’’ Howard said, “that makes it possible for retailers and adult tobacco consumers to clearly identify the different styles moving forward.’’

The manufacturer used focus groups and other research to arrive at the new package designs, already evident on four company brands and coming soon to three of its best-known products, Camel, Doral, and Winston.

A spokesman for USA, which sells more cigarettes than any other manufacturer and has not dramatically altered packaging yet, said the company would not comment on its marketing plans.

Harvard School of Public Health researcher Greg Connolly, former director of Massachusetts’ tobacco control program, said he noticed the changes on a stop at a West Virginia convenience store a few weeks back. Connolly decided to see what would happen when he asked the clerk for a pack of Salem Ultra Lights.

“He gave me a pack of Salem Silvers, and I said, ‘No, no, no, where are the lights?’ ’’ Connolly recalled. “And he said, ‘These are lights, these are the same thing. All they’ve done is change the name because of the new federal requirement.’ ’’

While the Salem name change is only weeks old, the pack has been evolving for two years - during the same period when Congress was moving to clamp down on the industry.

In 2007, according to the company spokesman, Reynolds began softening the dark green packaging for its light and ultralight Salems, opting for “a brighter, more vibrant color.’’

David Hammond, a tobacco control specialist at the University of Waterloo in Canada, has tracked tobacco branding practices around the world.

“Often, they’ll change one element at a time - they change the colors and then the words follow,’’ Hammond said. “And there’s no question the companies have known that changes in the words ‘light’ and ‘mild’ were imminent in the US.’’

“They will say, ‘Doc, I know I shouldn’t be smoking, but at least I’ve switched to these mild, low-tar lights,’ ’’ said Fiore, director of the University of Wisconsin Center for Tobacco Research and Intervention. “These are individuals who have a chronic case of tobacco dependence and are struggling to break free of it, and that struggle is compromised by labeling that gives them a false and deadly sense of reassurance.’’

While the new law clearly bans use of brand names that include “light’’ and “mild,’’ it does not explicitly address color schemes.

But researchers, led by Hammond, have found it’s clear in the minds of consumers what the hues connote.

Shown packs of cigarettes in person and online, smokers deemed “silver’’ or “gold’’ brands as being less dangerous than regular varieties.

A coalition of five major health advocacy groups wrote to the FDA last month, urging it to be vigilant for signs the tobacco industry was adopting new, color-driven names or using symbols to circumvent the regulations.

Tobacco control specialists argue that all cigarettes should be sold in plain, standard packaging with only the most neutral references to what’s inside.

Using color to cement an image is a tried-and-true staple of the advertising world. Diet Coke, for example, resides in a gleaming silver can, starkly different from the intense red container of the original variety. And cigarette makers have long appreciated the potential to use colors to speak loudly. Industry documents released through litigation noted that lighter hues were desirable because “white is generally held to convey a clean, healthy association.’’

“You don’t need McDonald’s written under the golden arches to know it’s McDonald’s,’’ said Douglas Quintal, a marketing specialist at Emerson College. “In my estimation, that’s what the tobacco industry’s banking on, that consumers will read beyond the gold and the new naming and look at the new package and say, ‘Yeah, that’s low tar, that’s low nicotine.’’