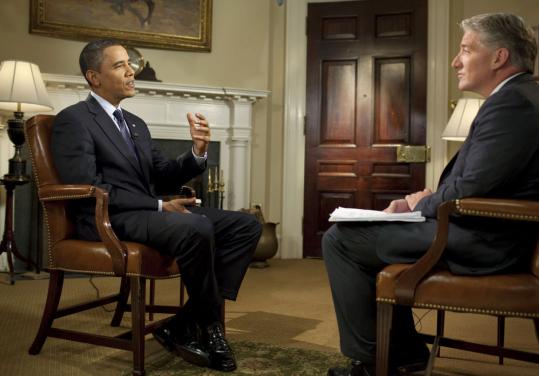 WASHINGTON - President Obama sought to blanket the airwaves yesterday with an impassioned defense of his health care effort during back-to-back broadcasts of taped interviews on five morning-news programs.

In interviews conducted Friday in the Roosevelt Room of the White House, Obama acknowledged being humbled by the challenge of “breaking through’’ in the complicated and emotional battle over health care legislation.

“I think there have been times where I have said I’ve got to step up my game in terms of talking to the American people about issues like health care,’’ he told George Stephanopoulos on ABC’s “This Week.’’

“I’ve tried to keep it digestible, you know. It’s very hard for people to get their whole arms around it. And that’s been a case where I have been humbled and I just keep on trying harder, because I really think it’s the right thing to do for the country,’’ the president said.

Acknowledging a shift in his own thinking, Obama also defended plans to require that every American carry health insurance. He denied repeated assertions from Stephanopoulos that the mandate represents a tax on average Americans.

“You can’t just make up that language and decide that that’s called a tax increase,’’ a clearly frustrated Obama said. “My critics say everything is a tax increase. My critics say that I’m taking over every sector of the economy. You know that . . . I absolutely reject that notion.’’

Beyond health care, the president said yesterday that he will remain skeptical about the need for more US troops in Afghanistan until he is satisfied that the military has the right strategy for winning the war there.

He said Russian opposition did not influence his decision to cancel a European missile defense system. He also said he will not ask the Justice Department to end its probe into CIA interrogations of terrorism suspects.

But the interviews were devoted primarily to the battle over his health care efforts. Hewing to virtually the same script in each, Obama voiced a desire for a more civil tone in the debate.

“We all have an obligation to try to conduct this conversation in a civil way. And to recognize that each of us are patriots,’’ he told NBC’s David Gregory on “Meet the Press.’’ The interviews also included CNN’s “State of the Union,’’ CBS’s “Face the Nation,’’ and Univision’s “Al Punto.’’

Republicans shot back quickly, sending out an e-mail to reporters titled “If it’s Sunday, it’s Misleading the Press.’’ In it, the Republican National Committee offered its theory for the president’s five-show Sunday blitz: “Desperate to Get Americans on His Side, Obama Continues to Push Falsehoods About His Government-Run Health Care Experiment,’’ the release read.

After Obama’s appearance on NBC, Senator Lindsey O. Graham, a South Carolina Republican, said the issue is not one of rhetoric or style. “The president is selling something people aren’t buying,’’ Graham said. “He’s been on everything but the Food Channel.’’

In the interviews, Obama portrayed himself as willing to take politically difficult positions, citing his move to pursue alternative dispute resolutions in cases of medical malpractice. “That’s not popular in my party,’’ he said on NBC.

However, many physician leaders have complained that the administration’s $25 million grant program falls far short of the aggressive changes they seek, including a cap on legal awards to injured patients.

Tomorrow, the Senate Finance Committee will begin action on a bill drafted by panel chairman Senator Max Baucus, a Montana Democrat, and 564 amendments.

Obama also said the community organizing group ACORN should be investigated for offering tax help to a couple posing as a pimp and a prostitute in widely watched videotapes.

But in the interview on ABC, the president did not say who should conduct such an investigation and played down the importance of the controversy.

“What I saw on that video was certainly inappropriate and deserves to be investigated,’’ he said, but he declined to say whether he supported action by Congress to cut off federal funding for the group. “Frankly, it’s not something I’ve followed closely,’’ Obama said, adding he had not been aware that ACORN received much federal funding.

ACORN - which stands for the Association of Community Organizations for Reform Now - has come under fire after videotapes showing field office employees giving tax advice to two conservative activists who posed as a pimp and prostitute. Congress voted last week to cut off federal funding for the organization, and House Republicans are pursuing investigations of the group’s financial activities.

ACORN said last week it would order its own investigation of the video scandal.