All sides go on attack as senator issues health plan 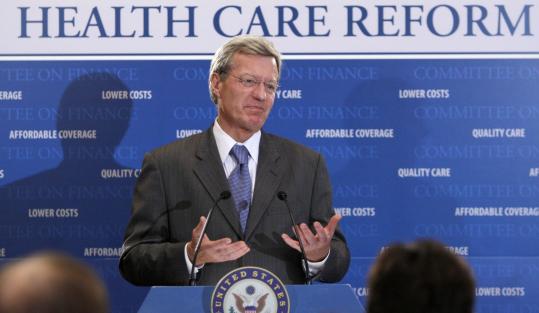 WASHINGTON - Max Baucus, chairman of the Senate Finance Committee, released his long-awaited health care proposal yesterday without the bipartisan support he had sought over months of painstaking negotiations, only to see it attacked from every corner of the political spectrum.

Republicans said his plan spent too much on insurance subsidies for low-income people, Democrats said it did not spend enough.

Lawmakers in both parties said it was unaffordable, particularly for low- and middle-income people. Republican leaders, who have panned the Democrats’ plans from the start, pronounced it “dead on arrival.’’

Liberal Democrats and unions recoiled at Baucus’s proposal to compromise with moderates on the government-sponsored insurance option by establishing nonprofit insurance co-ops instead.

And lawmakers on both sides of the political aisle raised concerns about taxes on insurers and medical device mak ers. The Finance Committee is the fifth and final committee to take up health care legislation, but Baucus’s proposal was the most anticipated because he was the only chairman who engaged in serious bipartisan discussions.

Despite all the negative reviews, the Baucus plan might still represent the best chance of a workable compromise.

The Congressional Budget Office said yesterday the measure, which would cost $774 billion over 10 years instead of the $1 trillion associated with other bills, has enough taxes, fees, and cuts to reduce the deficit by almost $50 billion by 2019. That would ease a major concern of some centrist Democrats and perhaps a moderate Republican or two.

Meanwhile, Democrats in the majority recognize that their political fortunes depend on passing sweeping health care legislation, so they still have a strong incentive to work toward a final product.

Yesterday, Senator Jay Rockefeller, a Democrat from West Virginia who is among the most highly respected Democratic senators on health care, carried in his pocket a printed list of his objections to Baucus’s proposal, which he said he could not support in its present form. But he said he would turn his litany of complaints into a stack of amendments, and would probably not stand in the way of a bill.

“People could shout and scream and yell, but when it comes right down to it, they’re really voting yes or no on the American people,’’ he said.

The much-anticipated unveiling yesterday will start another arduous, detailed process. Next week, the Finance Committee will begin voting on the bill, section by section, amending it along the way in hope of finding enough votes to pass it. Then the Finance Committee’s bill must be melded with the bill produced by the Senate Committee on Health, Education, Labor and Pensions. The final bill will be amended on the Senate floor, and if it passes, will be blended with the House version in a conference committee.

The Baucus bill would cover 94 percent of Americans by expanding Medicaid, requiring everyone to obtain insurance or pay a tax penalty; establishing a new, more tightly regulated insurance market for individuals and small businesses that would prohibit insurers from discriminating against the sick; and by providing subsidies to help people of modest incomes afford to buy insurance.

It does not contain an employer mandate but would force employers with more than 50 workers who do not offer affordable insurance to reimburse the government if their employees take advantage of the new subsidies. Small businesses - those with fewer than 25 employees and average salaries of less than $40,000 - would get tax credits.

The cost of the plan is substantially lower than the $900 billion to $1 trillion 10-year cost of the other plans that have passed the House and Senate, mostly because it would offer low-income families less generous tax credits to help them afford insurance.

Yesterday consumer groups and patient advocacy organizations held a press conference at the Capitol to draw attention to what they see as the bill’s main flaw: It is, they said, unaffordable for millions of Americans. People earning 150 to 200 percent of the poverty level - or between $30,000 and $40,000 for a family of four - would have to pay 5.5 percent of their income under the Baucus proposal, plus out-of-pocket costs, compared with 1 to 3 percent of income under the proposals put forward by other committees.

To help underwrite the cost of expanding coverage, the bill would raise $215 billion by taxing insurers 35 percent on insurance plans that cost more than $8,000 for individuals and $21,000 for families; insurers would pay the tax on the difference between the threshold and the cost of the plan.

Baucus said, and most economists agree, that the tax would help “bend the cost curve’’ of steeply increasing health costs over the long term by discouraging employers from offering generous “Cadillac’’ plans that take advantage of the federal income tax break on health benefits. A three-year phase-in period for high-cost states would cushion the impact somewhat for people in Massachusetts and other state where health care costs are far above average.

Baucus smiled tightly as he greeted reporters packed into the Finance Committee’s hearing room yesterday. He said he was optimistic that it would eventually win support from Republicans as well as Democrats and said it closely followed what President Obama had proposed in his speech to a joint session of Congress last week.

Moderates, who will probably determine that, sounded noncommittal about the legislation yesterday.

Senator Ben Nelson, Democrat of Nebraska, said he still had to study the details, and Senator Olympia J. Snowe, a Republican from Maine who is probably the most likely to vote with Democrats in favor of a solution, issued a statement praising Baucus’s leadership and saying she hoped to continue working out her concerns during the committee’s voting.

John Rother, executive vice president of policy and strategy for AARP, said the bill’s poor reception reminded him of the fight in 2003 over establishing a Medicare drug benefit, which passed despite heated dissent from both sides of the political aisle.

Baucus was in the middle of that fight too, and he helped craft the compromise.

He noted that some senators could decide not to filibuster the bill but vote against it on principle.

Once 60 senators agree not to hold up the vote, legislation can pass by a simple majority.

Democrats, he said, “cannot afford to see this go down.’’