State warns on bottles with BPA

Chemical may pose danger for children; Risk seen in those pregnant or nursing 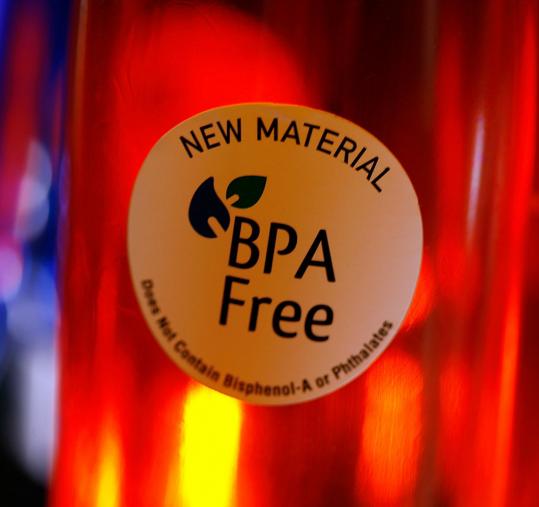 Concerns about the health effects of bisphenol A, which is used to make plastic stronger, have given rise to products free of the chemical, such as these water bottles sold in California. (David McNew/ Getty Images)
By Beth Daley Globe Staff / August 4, 2009

The warning comes after an exhaustive yearlong review of the controversial chemical found in products ranging from baby bottles to the linings of canned food. Studies in laboratory animals suggest BPA might increase the risk of developmental problems in some fetuses and young children.

Children and adults can ingest tiny amounts of the chemical when they drink from cups or eat from containers made with BPA.

Massachusetts is one of the first states to issue a warning to consumers, although it did not go as far as Connecticut, which has banned the chemical from infant formula and baby food cans and jars, and reusable food and beverage containers sold in the state. They are among a half-dozen states or local governments that have, in the absence of decisive federal action, taken steps to protect the public from BPA.

“We are concerned about this enough that we want to warn the public,’’ said Suzanne Condon, director of the state Bureau of Environmental Health. She said the most “consistent’’ scientific evidence that BPA may be harmful was focused on young children. “It just seemed it wouldn’t be appropriate for us to sit back and not do anything.’’

The US Food and Drug Administration, which has long declared BPA safe, is now taking a deeper look at the chemical and will provide a public update on Aug. 17, according to an agency spokesman.

Many manufacturers have voluntarily replaced BPA in products ranging from baby bottles to drinking water containers - and some stores such as and have agreed to discontinue carrying some children’s items made with BPA.

Still, many products containing BPA can be found in stores, including some transparent, hard plastic drinking bottles, and cans of liquid infant formula, soup, and soda. BPA, lightweight and strong, has long been used to strengthen plastic drinking bottles and to prevent corrosion and increase the shelf life of canned products.

The state’s warning is precise for parents of children up to age 2: Avoid transparent (clear or colored) plastic containers or baby bottles with the recycling number 7 and the letters PC (which stands for polycarbonate); use glass or stainless steel instead. If plastics are still being used, parents should avoid heating those containers because that can increase the release of the chemical. They should also wash the containers by hand with warm water and soap, instead of placing them in dishwashers.

Women who are pregnant or breast-feeding should also eat, or cook with, fresh or frozen products instead of canned foods that may contain BPA, to reduce fetal or infant exposure to the chemical, Condon said.

Environmental health advocates praised the state for the warning but said it didn’t go far enough. They want state public health officials to use their authority to ban BPA in all children’s products sold in Massachusetts.

Along with Connecticut’s ban and the Bay State’s new warning, Minnesota, Suffolk County in New York, and Chicago have passed regulations to prevent the sale of BPA baby bottles and, in some cases, sippy cups. Canada banned the sale of baby bottles containing BPA last year.

Condon said the state may ban BPA products in the future, but officials first wanted to see what the FDA would do. She said a ban would take more time and effort and in the meantime, she said, the state Department of Public Health thought it important to warn the public.

Numerous animal studies in recent years suggest that low levels of BPA exposure in fetuses and young children might cause developmental problems as well as contribute to obesity later in life. Health effects on adults are not well understood, although one large human study linked BPA concentrations in people’s urine to an increased prevalence of diabetes, heart disease, and liver toxicity.

Condon said one study was particularly jarring because it showed that newborns don’t break down the chemical well: Using a computer model, researchers predicted that newborns could have 11 times more BPA in their blood than adults because of enzymatic differences between newborns and adults.

BPA can mimic the hormone estrogen and is believed to disrupt the body’s endocrine system. Recent preliminary studies also suggest BPA may interfere with the effectiveness of chemotherapy drugs for breast cancer.

Officials with the American Chemistry Council, an industry trade group, said yesterday that BPA was not harmful, noting that 11 national regulatory bodies - from the United States to Japan - have recently concluded that the chemical is safe for use in consumer products, including those for infants and children. In an e-mail, spokeswoman Kathryn Murray St. John said that “recommendations regarding regulated products should await the outcome of FDA’s review.’’

Still, the FDA’s own scientific advisory board has criticized agency officials for relying on industry-funded studies to declare the chemical safe.

Condon’s office urged parents to use powdered infant formula, which isn’t stored in containers with BPA, but if a small child is on a special liquid formula, they should not make any changes to the baby’s diet without consulting their healthcare provider first. While BPA can be found in breast milk, Condon’s office stressed that mothers should continue to breast-feed and that the most effective means of reducing BPA exposure to infants is to avoid BPA products while doing so.

© Copyright 2009 Globe Newspaper Company.
How to avoid bisphenol A
Q. How do I know if a bottle has BPA in it?

A. Polycarbonate, the kind of plastic that contains BPA, is hard and clear. It may also be tinted. Look for a code on the bottom. If you see a number 7 recycling symbol, and the letters "PC", the bottle contains BPA. You should also avoid bottles with only the number 7; while not all contain BPA, most do.

Q. What should I use instead?

A. Glass or stainless steel bottles do not have BPA. There are also several kinds of plastic baby bottles that do not have BPA. However, studies on BPA-free products are too limited to recommend one product over another. Be sure you look at the bottom of the bottle and read the label carefully to make sure you are choosing a BPA-free bottle.

Q. What else can I do to protect my child?

A. Eat fresh or frozen fruits and vegetables instead of canned products (the lining contains BPA) if you're pregnant or breastfeeding. Do not heat food or drinks in polycarbonate plastic containers.