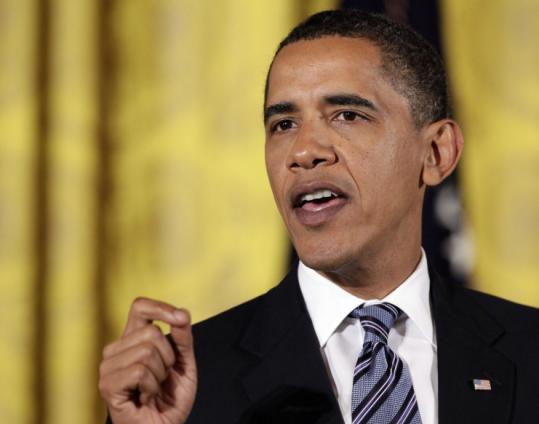 President Obama had called for Congress to vote on health legislation by the August recess. When it was clear that deadline would be missed, he said he expects a bill by year’s end. (Alex Brandon/ Associated Press)
By Tom Raum Associated Press / July 26, 2009

“And it’s going to change when I sign health insurance reform into law,’’ the president said in his weekly Internet and radio address.

A new study by the White House Council of Economic Advisers said small businesses pay up to 18 percent more to provide health insurance for their employees. As a result, fewer of them do so and the number has been shrinking further in these hard economic times.

It was released yesterday as part of the administration’s campaign to build public and congressional support for Obama’s healthcare efforts. Obama had called for Congress to vote on health legislation by the August recess, but when it became clear this week lawmakers would miss that deadline, he said he expects a bill by year’s end.

Separately, congressional budget scorekeepers say one highly touted idea for saving money from Medicare to finance a health overhaul would only yield modest savings. In a setback for Obama, the Congressional Budget Office said that creating a powerful commission to recommend Medicare cuts would produce only about $2 billion in savings over 10 years. Cuts the commission agreed on would go into effect unless Congress overrides them.

Small companies pay proportionately more than big ones because they lack bargaining power and face higher administrative costs, the study found. It said that effectively levied a “heavy tax’’ on small businesses and their employees. “Right now, they are getting crushed by skyrocketing healthcare costs,’’ Obama said, citing the report.

Republicans dismissed the new report as more political propaganda by the administration as it struggles to win approval of its centerpiece domestic priority.

“There’s a reason why almost every employer and small business group is opposed to the Democrats’ government takeover of healthcare, and that’s because it would impose new job-killing taxes during a recession,’’ House minority leader John Boehner, Republican of Ohio, said. “No report can change that.’’

And in the weekly GOP address, Representative Cathy McMorris Rodgers of Washington state and vice chairwoman of the House Republican Conference, said, “America’s small businesses will pay a high price.’’ Citing a study by the National Federation of Independent Business, she said Democratic-written proposals would destroy a million more jobs than the economy has already lost.

She called the Democratic efforts “a prescription for disaster - one that will put Washington bureaucrats in charge of your family’s personal medical decision.’’

A proposal in the House calls for employers with a total payroll above $250,000 to offer health insurance to their workers or face a surtax of as much as 8 percent. A Senate committee version would require all businesses, except those with fewer than 25 employees, to provide health coverage or pay a $750 fine per year for each worker.

Among the provisions in draft legislation viewed favorably by the administration are: an “insurance exchange’’ allowing small businesses that meet certain criteria to be able to purchase health insurance from a multitude of plans; and tax credits to help small businesses pay for the coverage.