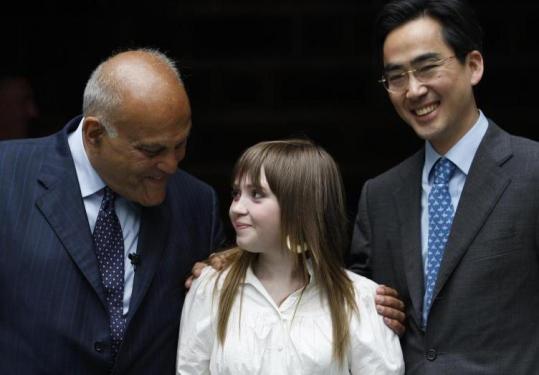 LONDON - British doctors designed a radical solution to save a girl with major heart problems in 1995: they implanted a donor heart directly onto her own failing heart.

After 10 years with two blood pumping organs, Hannah Clark’s faulty one did what many experts had thought impossible: it healed itself enough so that doctors could remove the donated heart.

But she also had a price to pay: the drugs Clark took to prevent her body from rejecting the donated heart led to malignant cancer that required chemotherapy.

“This shows that the heart can indeed repair itself if given the opportunity,’’ said Dr. Douglas Zipes, a past president of the American College of Cardiology. Zipes was not linked to Clark’s treatment or to the Lancet paper. “The heart apparently has major regenerative powers, and it is now key to find out how they work.’’

In 1994, when Clark was eight months old, she developed severe heart failure and doctors put her on a waiting list to get a new heart. But Clark’s heart difficulties caused problems with her lungs, meaning she also needed a lung transplant.

To avoid doing a risky heart and lung transplant, doctors decided to try something completely different.

Sir Magdi Yacoub of Imperial College London, one of the world’s top heart surgeons, said that if Clark’s heart was given a time-out, it might be able to recover on its own. So in 1995 Yacoub and others grafted a donor heart from a 5-month-old directly onto Clark’s own heart.

After four and a half years, both hearts were working fine, so Yacoub and colleagues decided not to take out the extra heart.

The powerful drugs Clark was taking to prevent her from rejecting the donor heart then caused cancer, which led to chemotherapy. Even when doctors lowered the doses of drugs to suppress Clark’s immune system, the cancer spread, and Clark’s body eventually rejected the donor heart.

Luckily, by that time, Clark’s own heart seemed to have fully recovered. In February 2006, Dr. Victor Tsang of Great Ormond Street Hospital in London, Yacoub and other doctors removed Clark’s donor heart.

Since then, Clark - now 16 years old - has started playing sports, gotten a part-time job, and plans to go back to school in September.

“Thanks to this operation, I’ve now got a normal life just like all of my friends,’’ said Clark, who lives near Cardiff.

Her parents marveled at her recovery, and said that at one point during Clark’s illness, they were told she would be dead within 12 hours.

Miguel Uva, chairman of the European Society of Cardiology’s group on cardiovascular surgery, called Clark’s case “a miracle,’’ adding that it was rare for patients’ hearts to simply get better on their own.

“We have no way of knowing which patients will recover and which ones won’t,’’ Uva said.

Still, transplants like Clark’s won’t be widely available to others due to a shortage of donor hearts and because the necessary surgeries are very complicated. In the last few years, artificial hearts also have been developed that can buy patients the time needed to get a transplant or even for their own heart to recover.

Zipes said if doctors can figure out how Clark’s heart healed itself and develop a treatment from that mechanism, many other cardiac patients could benefit.

At the moment, doctors aren’t sure how that regeneration happens.