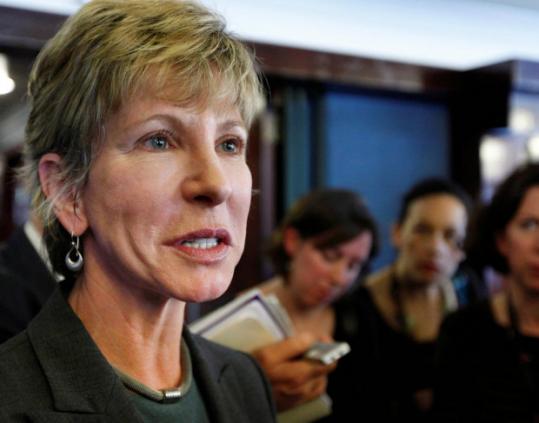 Karen Ignagni is CEO of America's Health Insurance Plans, the main health insurance lobby. She pushes for a bill that has no public option but that does require insurance for all. (Manuel Balce Ceneta/ Associated Press)
By Lisa Wangsness Globe Staff / June 30, 2009
Text size – +

WASHINGTON - The face of the insurance industry in Washington is a slight, soft-spoken former AFL-CIO employee benefits director with a penchant for data-driven logic. She has the confidence and intellectual agility of a skilled debater, but prefers to dwell on areas of agreement. On healthcare, Karen Ignagni often sounds like the lifelong Democrat that she is.

“The president is right,’’ she said at a panel discussion recently, when asked about President Obama’s belief that insurers must stop refusing to cover people who are sick. “That needs to change.’’

It is no accident that Ignagni is the chief executive of America’s Health Insurance Plans, the main health insurance lobby, at a time when a popular new Democratic president is planning a sweeping healthcare overhaul. Insurance executives believe this may be a life-or-death moment: If Congress creates the strong government insurance option that liberals want, insurers say they would be unable to compete and would eventually go out of business.

On the other hand, if lawmakers pass a healthcare bill that has no public insurance alternative but that does require everyone to obtain insurance - and provides subsidies to help them afford it - the industry could pick up millions of new subscribers.

Standing at the precipice is Ignagni (pronounced ig-NAHN-ee), a 55-year-old native of Providence who has run AHIP for a half dozen years, earning her board’s loyalty by picking her battles wisely - and winning them. In the late 1990s, when she ran one of the group’s predecessor organizations, she helped defeat the Patient’s Bill of Rights by arguing that it would drive up premiums for workers; recently she helped insurers gain credibility with Democrats by supporting an expansion of public health insurance programs for children.

Andrew Stern, president of the Service Employees International Union, calls her “extremely effective’’ and says she is sometimes underestimated.

“She seems like a very nice, charming person; she rarely draws lines with people, and she always tries to engage people in what they’re thinking and explain herself very professionally,’’ he said. “But underneath that is a calculating, shrewd, capable person, in the best sense of the word, for her association.’’

Under Ignagni’s leadership, the industry has taken a strikingly different approach to reform than it did in 1993-94, when it sponsored the “Harry and Louise’’ ads that played a critical role in defeating the Clinton administration’s healthcare plan.

Times have changed since then: Medical costs have soared, doubling premiums in the last nine years and causing insurers to lose customers. The financial crisis and related scandals have provoked a backlash against the private sector. With a resurgent Democratic Party determined to win the elusive healthcare overhaul it has wanted for generations, Ignagni understands the threat to big insurance is grave indeed.

“The bar is high. American people want to hear solutions from private sector organizations and industries,’’ Ignagni said in an interview in her office, just down Pennsylvania Avenue from the White House.

Over the last three years, with the help of like-minded board members, Ignagni has helped convince her industry that merely standing in opposition would be a dangerous risk. She has also shown them, with financial analyses of the effect Massachusetts’ 2006 reforms have had on insurers, that the right changes could help the industry not just survive but prosper.

“She has, by her intellect and by force of personality, led these pretty powerful executives to understanding both that they can participate in what is going on and that they should, because their companies will survive if the Congress and the White House understand what’s necessary to give people private insurance choices,’’ said James Roosevelt, CEO of Tufts Health Plan and a member of the AHIP board.

A month before Obama’s inauguration, AHIP declared its support for major market reforms, agreeing to stop refusing to cover sick people as long as Congress requires all Americans to obtain insurance. It backed up this position with a surprisingly detailed healthcare plan showing how these market reforms could help deliver universal coverage. It was a radical move within the industry, which has long maintained its profit margins by seeking out healthy customers and avoiding people with preexisting conditions. AHIP upped its ante this spring, promising to stop pricing premiums according to health status, a practice known as medical underwriting, as long as everyone has to buy insurance.

For more than a year, Ignagni has also met with other healthcare industries and consumer groups in a search for common ground, hoping to stave off a more fundamental restructuring of the health system.

“They can’t afford to see the movement for single payer grow,’’ said John Rother, legislative and policy director for AARP. “I think Karen is smart to be repositioning the industry on the side of reform.’’

But as the healthcare debate intensifies, Ignagni is walking a fine line between emphasizing the industry’s support for universal coverage and issuing dire warnings against the “unintended consequences’’ of a public health insurance plan. A strong national public insurance option would underpay doctors and hospitals, leaving them to shift more costs onto private payers, she says. Then, the insurance industry would collapse, flooding the government with billions of dollars in new obligations.

“A government-run plan - no matter how it is initially structured - would dismantle employer-based coverage, significantly increasing costs for those who remain in private coverage, and add additional liabilities to the federal deficit,’’ she wrote last week to the leaders of the Senate health committee.

Critics on the left, including the president himself, disagree. “If private insurers say that the marketplace provides the best quality healthcare . . . then why is it that the government - which they say can’t run anything - suddenly is going to drive them out of business?’’ Obama said at his news conference last week. “That’s not logical.’’

Though she is the voice of a wealthy industry, Ignagni comes from a family of union municipal workers. Her father was a firefighter and her mother administered grants at Providence City Hall. She can remember rolling down the steep Rhode Island State House lawn as a child, when her grandmother, a maintenance worker, lived across the street.

Not long after graduating from Providence College, Ignagni worked for a liberal healthcare advocacy group in Washington and later for the AFL-CIO, where she spent 11 years helping unions preserve their health benefits in the face of rapidly rising costs. From there she joined an association of HMOs, and when that group merged with a for-profit insurers’ lobby in the mid-1990s, the new board chose her as its leader.

Ignagni says she sees no ideological dissonance between her past and present views of the insurance industry. She says she has always believed that efficient, appropriate care is the best way to keep costs down and to ensure universal access. That is precisely the value she says the insurance industry has shown it can add through innovative programs like paying doctors for higher quality and helping people control their chronic diseases. The government, she argues, has failed to do the same in Medicare.

She acknowledges that the industry has made mistakes. A few days after Obama retold the story of how his dying mother spent her final days fighting with her insurance company, which insisted her ovarian cancer was a preexisting condition, Ignagni told a healthcare breakfast on Capitol Hill: “The president and his mother lived through something that we have worked so hard to prevent . . . we can get legislation to make sure that never happens to a family in this country again.’’

It remains unclear whether the insurance industry has delayed making such acknowledgments for too long. Ignagni says she is reading “Fiasco,’’ Thomas Ricks’s account of the mistakes the US military made in Iraq.

“I think that every CEO ought to read books like that,’’ she said, “because it’s a story about missed opportunities and wrong decisions.’’