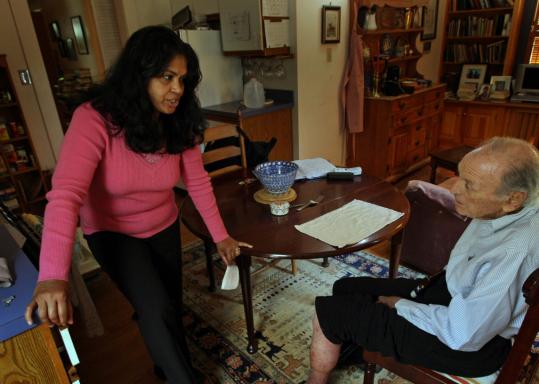 Massachusetts General Hospital launched a pathbreaking effort to cut medical costs by reducing hospital stays and emergency room visits by the frail elderly - an initiative that underscores just how hard it will be for the medical industry to make good on its promise to President Obama to pare healthcare spending by $2 trillion over the next decade.

Under the Mass. General plan, the federal Medicare program would save millions of dollars, by reducing hospitalizations of several thousand elders by 15 percent to 20 percent while improving their care.

But to reap those savings the hospital has had to invest heavily up front, expanding the staffs of its primary care practices to provide time-consuming, hands-on help for patients struggling with a multitude of health problems, from fading memories to faltering eyesight.

The sheer intensity of the services, which most primary care doctors simply don't have the time to provide, points to daunting complexity of cutting costs while gaining better results for patients.

Dozens of efforts to improve the efficiency of treating this key patient group have failed. In a study of 35 programs published earlier this year, researchers found that six - including Mass. General's - improved patient care and at least covered their costs. The government extended those six projects until August 2012.

David Cutler, a healthcare economist at Harvard University, said that improving care for this group of very sick patients is crucial if the Obama administration and Congress are to afford an ambitious program to cover the uninsured. "If we can't do this, it doesn't bode well for health reform," he said.

Mass. General's program, which began in 2006, hinges on nurses in primary care practices being in almost constant contact with patients and helping arrange even nonmedical services.

Nurse Frances Drysdale, for example, participated in more than 40 phone calls and meetings last year to schedule doctors' appointments and family meetings for Thomas Brown, an 89-year-old with congestive heart failure. She arranged for physical therapy and nursing in his Cambridge home, hired a portable oxygen company, and helped persuade him to cut back on his driving.

"If we hadn't interceded at a lot of these points, he would have either been in the hospital or found not in great shape," said Drysdale, who manages the care for about 200 patients.

A retired historian at the University of Massachusetts at Boston, Brown hasn't been seen in the emergency room or admitted to the hospital since he enrolled in the program in August 2007. Drysdale, he said, "has transformed my life."

Dr. Eric Weil, a primary care physician and medical director of the Mass. General program, believes placing the extra help right in the primary care practice is a key to its success. Some insurance companies have tried to reduce costs by having case managers call chronically ill patients from central locations, without having a relationship with their doctors.

"This is very different from having someone make a phone call from an office 300 miles away and say, 'You're a diabetic, let's talk about it,' " said Weil, who believes patients pay closer attention when the advice comes from their doctors' office. The Mass. General program also relies on an electronic medical records system to help coordinate patients' care.

Medicare, which is expected to run out of money to pay hospital bills by 2017, has found that cost-cutting initiatives focused solely on better educating patients are largely ineffective. Unlike such programs, Mass. General providers "seem to be saying these are 75- or 80-year-olds who aren't likely to change," said David Bott, a researcher with the US Centers for Medicare and Medicaid Services.

Many programs that use technology to monitor patients at home also have not worked out, neither improving care nor saving money, because physicians were not available to act immediately upon troubling symptoms, according to the study published this year in the journal Health Affairs.

Obama and Senator Max Baucus, a Montana Democrat who chairs the Senate Finance Committee, have cited the enormous cost of hospital readmissions as a sign of inadequate care and unnecessary expense. About 18 percent of Medicare patients are readmitted to the hospital within 30 days of their original visit, at a cost of at least $15 billion annually. Democrats and Republicans have also talked about the need for better primary care for chronically ill patients, especially the elderly, as a way to avoid hospital stays in the first place and ER visits.

To provide all the extra services to patients, Mass. General spent $8 million or $9 million over the first three years of the program, Weil said. The savings from keeping patients out of the hospital has covered this cost, plus generated another estimated $7 million to $10 million in savings. The overall cost was about 5 percent less than for a control group of patients at other Boston hospitals treated in the traditional way.

"Medicare is looking for any and every way to save money," Weil said. "This is a population of patients who are sick and will get sicker over time. Any opportunity to demonstrate savings in this group of patients is good, and 5 percent is very good."

For the 2,200 patients in the program, hospital readmissions dropped 19 percent from 2007 to 2008, while hospital stays overall fell 17 percent and emergency room visits dropped 15 percent, according to Mary Neagle, the project manager, although these numbers are preliminary.

Medicare officials or their consultants have visited the program four times, most recently last week, to estimate the cost savings and figure out how to replicate across the country the care given to 80-year-old Marion Craven of Somerville.

Craven, who is legally blind and has congestive heart failure and diabetes, can't cook for herself anymore. A hospital community resource specialist spent hours researching companies that make and deliver meals last year. After Craven was admitted to the hospital for pneumonia in January 2008, nurse Robin Grossman arranged for her to have pulmonary rehabilitation near her home in an effort to build her endurance. Grossman made dozens of calls to arrange for oxygen tanks home and to obtain a talking scale, so Craven would know when her weight was creeping up, a sign of worsening heart failure that can lead to breathing problems and hospitalization.

Grossman said she prevented Craven from having to go to the emergency room last month by immediately having her doctor increase her medication dose and sending a nurse to her home when her weight did increase, but before she began gasping for breath.