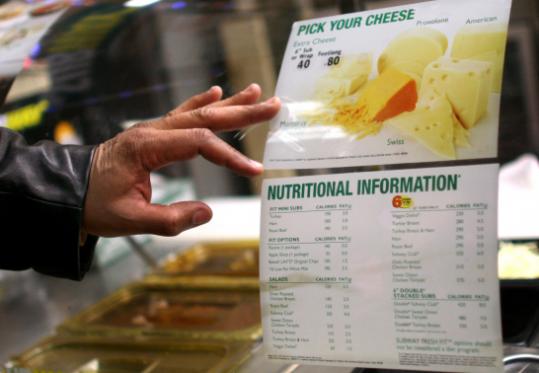 Calorie information has been posted at chain restaurants in New York since 2008. (Yana Paskova for The New York Times/ File 2008)
By Stephen Smith Globe Staff / May 13, 2009
Text size – +

NEW YORK - It has been a year since the nation's biggest city became the first to order , , and other restaurant chains to post calories on menu boards as prominently as prices.

Now, as health regulators in Massachusetts appear poised to adopt similar rules this morning, residents might want to listen to hungry, harried New Yorkers to know what is coming. From the West Side to the East Side, fast-food aficionados insist they still peek at the calorie counts and, sometimes, make healthier choices when they see, for example, that an angus burger with bacon and cheese at McDonald's is laden with 820 calories.

But the lure of sweet, calorie-rich offerings remains powerful - even if customers know that a single, creamy coffee drink can pack 400 calories or more.

Consider Niles Patel. He visited a Midtown Manhattan McDonald's yesterday afternoon, and after reflecting on the menu board summary, he ordered a chicken sandwich wrap, containing just 260 to 340 calories. But he topped off his meal with a sundae, loaded with roughly the same tally of calories.

"I do pay attention to it," Patel, 33, of North Bergen, N.J., said of the calorie listing, "but there's no rhyme or reason to whether I follow it."

Surveys by the New York City Department of Health suggest that the calorie counts at least make people think a bit more about what they put in their stomachs. Since the calorie regulation went into effect in New York last May, 67 percent of patrons at national chains reported they saw the postings, and 25 percent of those who noticed the listings said the information factored into their orders.

"That works out to hundreds of thousands of people a day because so many people eat fast food every day," said Dr. Lynn Silver, assistant commissioner for chronic disease prevention in New York.

"But the information needs to be front and center on the menu boards to be seen by most people," Silver said.

The calorie rules, which have been adopted in cities as far-flung as Philadelphia and Seattle in the past year, were born of frustration among doctors and health specialists who watched with growing alarm as the nation's collective waistline ballooned during the past two decades. Two of three American adults weigh too much.

And with studies showing that Americans consume one-third of their calories outside the home, fast-food chains, with standardized menus and a penchant for super-sizing, have become a top target for regulators.

Even before New York made it the law, Subway sandwich shops, like the one on Ninth Avenue near 53d Street, started listing calories next to prices.

The manager, Mustapha Laababer, said a few times every day, customers grill him about the calorie readings. "They care about calories," Laababer said, "especially women."

Sometimes, he said, when they realize a six-inch turkey sub has 280 calories - 30 fewer than the chicken - they switch their order.

Brenda Dunton tucked into a turkey sub just a little past the lunch-hour rush yesterday. It can be challenging, she acknowledged, making healthy choices, particularly in New York, where the air is perfumed with the aroma of temptation.

"This morning, Dunkin' Donuts; I could smell the doughnuts - heavenly," Dunton said. "It might smell good, it might taste good, but I kept walking."

The calorie tallies, she said, help keep her on the gastronomic straight and narrow. "It has influenced me not to eat a certain way," she said. "I'll be 59 years old, and I want to be around a long time."

George Clement is nearly four decades her junior, but he occasionally throws a glance at the counts. If, after finishing a workout, "I went in and it said 1,000 calories, that would definitely change my perspective," said Clement, 20, of Brooklyn.

Of course, not everyone is paying heed to the calorie labels. A man stirring cream into his coffee at an Upper West Side Starbucks said he knew the counts were there but did not feel compelled to let them shape his choices.

Ten blocks to the south, across from Lincoln Center, a woman with a good book and an earnest bearing explained she might consult the calorie readings when her sweet tooth beckoned. Yes, she said, she would still enjoy a treat, but not the one with the most calories.

Fast-food chains have, for the most part, been measured in their response to the calorie posting laws, although several, including Canton-headquartered Dunkin' Donuts, have called for a single national standard rather than a patchwork of local regulations.

In Massachusetts, the rule is expected to win approval today from the Public Health Council, an appointed board of doctors, public health specialists, and consumer advocates. It would apply to chains with 20 or more restaurants in the state. Establishments would have until November of next year to comply, and the regulations would not apply to grocers or school cafeterias.

John Auerbach, the Massachusetts public health commissioner, said his agency was realistic about what the calorie-posting law can accomplish.

"We need to work on many fronts in terms of changing people's behaviors and encouraging healthy nutrition and more exercise," Auerbach said. "And menu labeling is certainly one piece of it, but it's not the entire answer to the problem."

© Copyright 2009 Globe Newspaper Company.
Related coverage
Your comment is subject to the rules of our Posting Policy
This comment may appear on your public profile. Public Profile FAQ