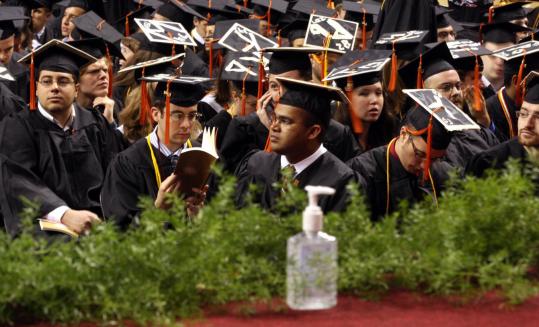 This story was reported by Stephen Smith, Brian R. Ballou, and Kay Lazar of the Globe staff and Globe correspondents Matt Byrne and Elizabeth Cooney. It was written by Smith.

An outbreak of swine flu on Harvard's medical campus may have spread to as many as nine dental students, setting off a hunt for patients potentially exposed to the new virus in a university clinic, Boston and Harvard health authorities announced yesterday.

Disease trackers said they believe the risk to patients is slim because dental students routinely don masks, gowns, and gloves while providing treatment. Still, intent on interrupting the accelerating spread of the germ, authorities want to find patients to make sure they have no flu symptoms, and, if they do, offer treatment and advice on how to contain the virus.

Boston authorities estimated that no more than 20 patients had contact with students who might transmit the H1N1 virus known as swine flu.

A week after the swine flu made its US debut, the pace of developments yesterday hastened - with reports of new cases coming in across the country, as well as in New England.

Three hours after city health officials revealed the spreading circle of infections at Harvard, state health representatives gathered at a hurriedly assembled press conference to report that four additional cases of swine flu had been confirmed in Massachusetts, including two children who were hospitalized but are recovering.

Authorities from the Massachusetts Depart ment of Public Health said they could find no obvious links among the four patients newly confirmed with the disease - the total number now is six statewide - or a link to the Harvard students. That suggests the germ has begun spreading in communities.

Further evidence: None of the four patients had been to Mexico recently, or had known contact with anyone who had. Authorities believe the new flu strain originated in Mexico, where up to 176 have died.

In Bedford, a school will be closed for more than a week because a 3-year-old pupil is considered a probable case of swine flu. In Boston, two passengers who complained of flu-like symptoms on separate transcontinental flights were brought to local hospitals for evaluation.

One of the planes was from London on a regular scheduled trip to Logan International Airport, and the other was from Munich bound for Washington, D.C., but diverted to Boston after a passenger complained of symptoms. One of the cases turned out to be a false alarm; the second did not appear to be swine flu.

Disease investigators acknowledged it remains unclear whether the virus ultimately will prove to be a temporary nuisance, spawning relatively mild illness, or something more fearsome. In the United States, few swine flu patients have been hospitalized and only one person has died.

The march of the virus continued through the region; Connecticut's first case was confirmed; Maine's list of confirmed cases rose to six; and probable or suspected cases were being watched at a New Hampshire hospital, in Rhode Island, and at Amherst College. Together the cases offered a cautionary tale of how infectious agents spread in the modern era.

"We are in a global era, and there's a great deal of travel that goes on worldwide," said Allison Aiello, an epidemiologist at the University of Michigan School of Public Health. "That allows pathogens to move faster through the world than ever before."

Universities and hospitals are venues that can prove especially vulnerable to a virus such as swine flu, which migrates swiftly and finds easy targets in humans who possess no natural immunity against it.

"They really are two sides of a coin," said Dr. Benjamin Kruskal, director of infection control for Harvard Vanguard Medical Associates. "At colleges, you have a high density of people - anybody who's sick exposes a lot of people because they're packed together, particularly in a dormitory. And in a healthcare setting, you don't have a lot of people that densely packed, but you have a high proportion of people who are sick."

And in the Longwood Medical Area, there are both, which, public health authorities said, is why they intervened so forcefully once it became evident that swine flu might be spreading at the Harvard School of Dental Medicine.

All dental students were told to stay home until Wednesday, by which time any students harboring the virus should no longer be contagious. The same ban applies to those Harvard Medical School students who have contact with patients because they share the same campus and, often, the same social network.

The city temporarily shuttered the dental clinic operated by Harvard, ordered classes at the dental school canceled, and told the medical school that classes there should be suspended for all students through at least Monday.

"It's really erring on the side of an abundance of caution because these students go into hospitals, they go into clinics and have contact with patients," said Dr. Anita Barry, director of the health commission's Infectious Disease Bureau.

The temporary absence of the dental students - as well as third- and fourth-year medical students who do clinical rotations at Boston's teaching hospitals - should not significantly affect delivery of care, said Dr. David Rosenthal, director of Harvard University Health Services.

Laboratory tests have shown that two of the nine students are probably infected with swine flu; definitive federal lab results are pending. The other seven were linked by virtue of symptoms - and social interaction.

Working day and night, disease investigators from the city and two college campuses assembled the puzzle of a virus's spread: It led to the Massachusetts Institute of Technology. A student there traveled to Mexico and fell ill with flu-like symptoms, said Dr. Howard Heller, chief of medicine at the MIT Medical Department. That student's virus, then, was the seed that started the Harvard cluster, investigators suspect.

"And then the Harvard dental school students systematically became ill," Barry said. "There was not one single person who did all the transmission here."

At Concord Hospital in New Hampshire, where two workers have probable cases of swine flu, control strategies include giving antiviral medications to five patients and seven employees who came in close contact with one of the employees.

Neither of the two employees had any connection to each other or to Mexico, adding to evidence that the illness is spreading widely within the borders of the United States.

"We are not interpreting these two cases as transmission within the hospital walls," said Dr. Jose Montero, director of the New Hampshire Division of Public Health Services. "These people were exposed to somebody who gave it to them. We don't know who that was."

Similarly, at Amherst College, none of nine students stricken with what is suspected to be swine flu had traveled to Mexico or can recall contact with anyone who had, the college said. They are being told to remain in their dorm rooms - and to take antiflu medication.