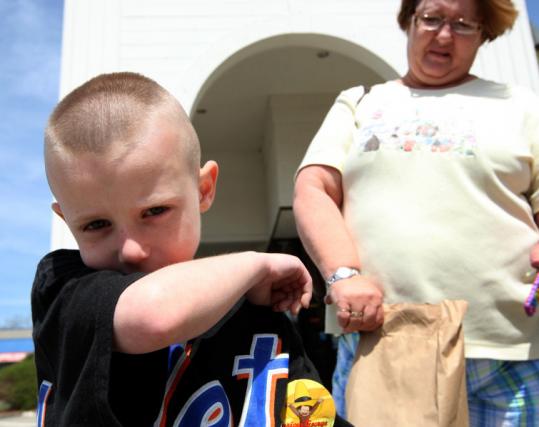 Late in the afternoon, the sick children's doctor notified the superintendent that test results showed they didn't have the flu after all - not even the garden variety - so there was nothing to worry about. But the scene of empty desks in Spencer could be repeated in other New England communities in coming days, as fear of the swine flu spreads as fast as the illness itself.

With much still unknown about the danger of this novel flu strain, parents are struggling to figure out how best to protect their children. Every cough or sniffle is now reason for anxiety.

"I'm a parent and a grandparent. I can understand their concern," Hicks said. "It's like a snow day and I decided not to cancel school, and a parent looks out the window and says, 'The roads look pretty bad to me and I'm keeping my child home.' We say, no harm done missing a day of school."

Parents interviewed yesterday said they were worried but not panicked about the possibility that swine flu had arrived on their doorsteps. Parents who sent their children to school said they thought officials had done what they could to inform families and clean the classrooms and school buses.

Colleen Holmberg, a mother of first- and second-graders at Lake Street School, was alarmed when she heard about their sick schoolmates Tuesday night.

"I was horrified because they don't have a vaccine for it now," Holmberg said yesterday in a on Route 9, where her two younger children were attending a boisterous birthday party. "I just didn't know it would be so close to home."

She wrestled with keeping her children home yesterday morning, deciding to send them after realizing that the school had been disinfected and that the greatest risk of infection had been on Monday and Tuesday, when the sick children were in school.

Up and down Main Street yesterday, worry was clear.

Lynda Halbrook of neighboring Brookfield was picking up prescriptions at for her 5-year-old grandson, Joshua, after taking him to see his doctor.

"He's got a cough, so you take him in right away," she said.

At the nearby library, patrons have been asking for information about swine flu ever since the town placed a reverse 911 call Tuesday alerting residents of the possible cases in their midst, library director Mary Baker-Wood said. "I wouldn't say it was real panic, but more 'What do I need to know?' " she said.

Librarians were printing out information from government sources and taking extra precautions in the building, cleaning computers and doorknobs beyond what custodians routinely do.

Dippin Donuts customer John Perry had the 1918 "Spanish flu" pandemic in mind. "If it was to blossom, I wouldn't hesitate to wear a mask. I'm shocked to see it's this close," he said before news of the negative test results was known.

Massachusetts education and health authorities issued a memo last night to school officials urging them to close classrooms under only two circumstances: if a student has a confirmed case of swine flu or if a child has flulike symptoms and has had direct contact with a known virus carrier.

Dr. Alfred DeMaria, the state's chief epidemiologist, said in an interview that it made little sense to close every school that has a child with classic signs of influenza: cough, fever, aches. And, he said, even if that were done, it would not prevent an initial round of virus transmission.

"You want to prevent the third round of infections and beyond that," DeMaria said.

The decision on whether to close a school ultimately resides with local superintendents, who may confront parental and political pressure that trumps the advice of scientists.

If districts opt to suspend classes in coming weeks, state Education Commissioner Mitchell D. Chester will entertain requests from superintendents that they not be required to complete the typical 180-day school year, said JC Considine, spokesman for the Massachusetts Department of Elementary and Secondary Education.

"He would be very receptive to considering those requests on a case-by-case basis," said Considine. "This is a very unusual circumstance."

Infectious disease specialists stressed that shuttering a school carries substantial consequences - for both children and their families, because of missed learning and the difficulty that working parents may have finding child care on short notice.

But Dr. Jeffrey Kahn, a pediatric infectious disease specialist at the Yale School of Medicine, said parents should heed CDC advice to keep individual students out of the classroom if they are exhibiting flu symptoms.

Kahn and Dr. David Ozonoff, a Boston University School of Public Health specialist who runs an online flu encyclopedia, agreed that suspending classes because of suspected cases of swine flu is a step too far.

© Copyright 2009 Globe Newspaper Company.
Related coverage
More Swine Flu coverage
Your comment is subject to the rules of our Posting Policy
This comment may appear on your public profile. Public Profile FAQ