WHO raises threat level of pandemic 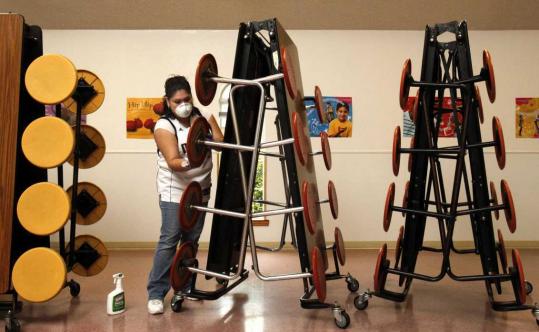 WASHINGTON - The swine flu outbreak began hitting home across the United States yesterday, spreading to 11 states and closing schools amid confirmation of the first US death - a Mexican toddler who visited Texas with his family - and the confinement of dozens of Marines after one came down with the disease in California.

Some 100 schools were closed, and more might need to be shut down temporarily, President Obama said, declaring, "This obviously is a serious situation." The total confirmed cases in the United States rose to nearly 100, with more suspected.

The Geneva-based World Health Organization sounded its own ominous alarm, raising its alert level to one notch below a full-fledged global pandemic. Said WHO director general Margaret Chan: "It really is all of humanity that is under threat during a pandemic."

Dr. Richard Besser, acting chief of the Centers for Disease Control and Prevention, said in Atlanta there were confirmed cases in 10 states, including 51 in New York, 16 in Texas, and 14 in California. The CDC counted scattered cases in Kansas, Massachusetts, Michigan, Arizona, Indiana, Nevada, and Ohio.

State officials in Maine said laboratory tests had confirmed three cases in that state, not yet included in the CDC count.

And the Pentagon said a Marine at the Twentynine Palms base in California had been confirmed to be ill with swine flu and was isolated, along with his roommate. A Marine spokesman at the Pentagon, Major David Nevers, said the sick Marine was doing well and his condition continued to improve. Nevers said about 30 others who had been in contact with the sick Marine would be held apart for five days to see if they show symptoms.

In Mexico, where the flu is believed to have originated, officials said yesterday the disease was now suspected in 159 deaths, and nearly 2,500 illnesses.

Despite calls from many US lawmakers for tightening controls over the Mexico-US border, administration officials ruled out that option.

"Closing our nation's borders is not merited here," said Homeland Security Secretary Janet Napolitano at a mid-afternoon briefing. She said closing borders or US ports would have enormous adverse economic consequences and would have "no impact or very little" to help stop the spread of the virus.

In fact, customs agents have delayed 49 people at the border because of flulike symptoms, and 41 have been cleared so far. Test results on the other eight were not complete.

Obama offered "my thoughts and prayers" to the family of a nearly 2-year-old Mexican boy who died in Houston, the first confirmed US fatality among more than five dozen infections. Health officials in Texas said the child had traveled with his family from Mexico to Brownsville on April 4 and had been sick for five days before being hospitalized there. He then was brought to Houston where he died Monday night.

Texas called off all public high school athletic and academic competitions at least until May 11 due to the outbreak.

Laboratory testing showed the new virus was treatable by the antiflu drugs Tamiflu and Relenza, and the first shipments from a federal stockpile arrived yesterday in New York City and several other locations. The government was shipping to states enough medication to treat 11 million people as a precaution. All states should get their share by Sunday.

A pandemic is an epidemic that has expanded globally. The swine flu has now been reported on four continents.

New Zealand's total rose to 14. Britain had earlier reported five cases, Spain four. There were 13 cases in Canada, and two in Israel.

The disease is not spread by eating pork and US officials appeared to go out of their way yesterday to not call the strain "swine flu." Obama called the bug the "H1N1 virus," and other administration officials followed his lead.

Of particular concern in the United States were the cases in New York City.

Health officials said the number of confirmed swine flu cases in New York had risen to 51, and tests were under way on the first three probable cases outside New York City.

City health commissioner Thomas Frieden said yesterday that all those with confirmed cases are recovering, including a 19-month-old baby and a young woman who were hospitalized.

Egypt ordered that all 300,000 pigs in the country be slaughtered. From travel bans and putting the kibosh on kissing, the world is taking drastic - and some say debatable - measures to combat swine flu.

Egypt ordered the pig slaughter even though there hasn't been a single case of swine flu there and no evidence that pigs have spread the disease.

At airports from Japan to South Korea to Greece and Turkey, thermal cameras were trained on airline passengers to see if any were feverish.

In Germany, where officials confirmed three cases, Lufthansa announced that starting today it will put a doctor aboard all flights to Mexico, the epicenter of the outbreak.

Roselyne Bachelot, France's health minister, said she would ask the European Union to suspend all flights to Mexico at a meeting today in Luxembourg.

© Copyright 2009 Globe Newspaper Company.
Related coverage
More Swine Flu coverage
Your comment is subject to the rules of our Posting Policy
This comment may appear on your public profile. Public Profile FAQ