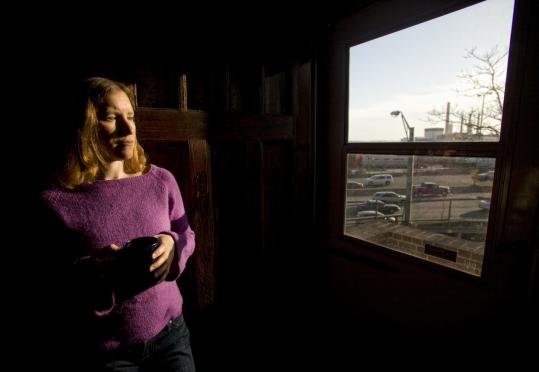 Linda Dyndiuk at her Somerville home, which is near Interstate 93. (Erik Jacobs for The Boston Globe)
By Bina Venkataraman Globe Correspondent / April 12, 2009

Residents of Somerville's Nunnery Grounds neighborhood have long tolerated concrete vistas of Interstate 93 and Mystic Avenue, honking cars, and black grime on their windowsills. Now, they are increasingly worried about an invisible highway nuisance: the tiniest pieces of pollution emitted by passing traffic.

Community members in Somerville, as well as Boston's Chinatown, have joined with Tufts University researchers to determine whether microscopic "ultrafine particles" spewed by combustion engines are harming the health of people who live close to highways. In a study that is the first of its kind in the state and among the first in the nation, the scientists will measure these tiny pollutants in various locations and collect and map heart disease data from residents.

For decades, researchers have studied the dangers of coarse particles emitted by power plants and vehicles, which can aggravate asthma and other health problems and are regulated by the US Environmental Protection Agency. Ultrafine particles are less understood and not subject to direct government limits, even though many scientists believe they could be even more harmful.

"Since we see associations with asthma and cardiovascular disease with people living near highways, you have to ask what's causing that," said Doug Brugge, director of the Tufts Community Research Center and the scientist leading the study, which will begin this summer. "There is a lot of smoke suggesting that there is a fire."

Researchers suspect the health risk from ultrafine particles is greatest downwind and within 300 feet of busy highways. Farther away, the particles tend to dissipate or collide with other particles to become larger. The particles, each thousands of times smaller in diameter than a human hair, are easy to breathe in, and they readily spread throughout people's circulatory systems and enter their brains. On their surfaces, they can carry toxic chemicals and metals.

Eric Barry, whose house in east Somerville overlooks I-93, said he grew concerned recently after he read articles about the health risks of living close to the highway. He has had asthma since he was a child and worries that the pollution could exacerbate it. "This house is what we could afford," he said. "If I could live farther away, I would."

Last year, Brugge and colleagues found high levels of ultrafine particles in some Somerville neighborhoods near I-93 and Mystic Avenue, and deaths from heart and lung disease are more common in Somerville than they are on average in the state. But this does not prove that highway pollution is the culprit. People's genetic predisposition to disease, their habits, and their exposures to other environmental harms may be to blame.

Dolores LaPiana, a resident of Nunnery Grounds, for example, lost her sister and her husband to lung cancer recently. Both smoked cigarettes for decades, but had quit smoking more than 20 years before their deaths. The new study, initiated by concerned Somerville residents who approached Brugge, will account for such risk factors.

More than 16 percent of US households, roughly 40 million Americans, live within 300 feet of a four-lane highway, railroad, or airport, according to the Census Bureau's 2007 American Housing Survey.

In many places in Greater Boston and beyond, people who live near highways tend to be low-income families and people of color. Foss Park, near the Somerville neighborhoods being studied, lies at the confluence of several highways used by an average of 250,000 vehicles per day - comparable to traffic rates in Southern California. During rush hour on a recent afternoon, immigrants faced off in soccer matches and played with their children in the park. Somerville also hosts the Boston Engine Terminal, an eight-acre repair facility for the state's diesel commuter trains.

But vehicle pollution can also be an issue in more affluent areas. Environmental activists successfully lobbied the state to require that developers of the Fenway Center project behind Fenway Park and over the Massachusetts Turnpike assess and address the risk posed by ultrafine particles from the highway. The state, however, recently announced that it will not require an environmental review for two towers proposed at the Prudential Center.

Jonathan Levy, a professor at the Harvard School of Public Health who studies ultrafine particles and has documented high levels in Mission Hill near the congested Brigham Circle, said community-based research is vital for shaping policy. "If this turned out to be as significant as some people think it could be, we need to learn about it really quickly," he said.

Brugge, at Tufts, said the study may show that hospitals, schools, or housing complexes should not be built close to highways or that developers should install air filters that can trap ultrafine particles. It could also point to the need to screen people who live and work near highways for heart and lung problems earlier and more regularly.

For LaPiana, who fought - and failed - to have the state plant a "wall of trees" lining the highway near her Somerville neighborhood, the new research is a way of getting government officials to respond.

"If there isn't a study," she said, "you're not going to get anyone to listen."