One for the ages

In the race to turn back the biological clock, consumers are reaching for an unproven pill 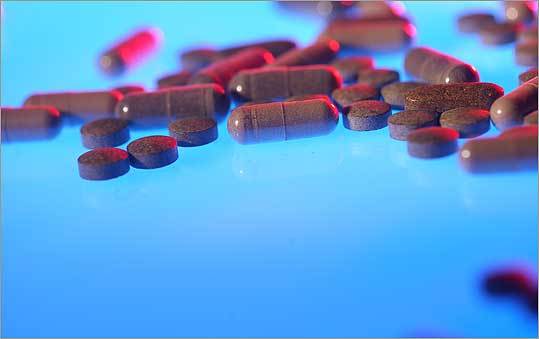 The lure of eternal youth has produced a multibillion-dollar-a-year global marketplace full of potions and pills that, the manufacturers claim, can offer life-extending benefits. Amid the dizzying array, one substance is capturing prime time attention: resveratrol.

Resveratrol advertisements - Reverse your biological clock! A miracle molecule! - are popping up everywhere, from the Internet to local health food stores. The stuff is even showing up in anti-wrinkle creams.

Ever since Harvard University molecular geneticist David Sinclair announced in 2003 that resveratrol appeared to dramatically extend the life span of yeast and fruit flies, the race was on to prove it worked in people.

Six years later, scientists have yet to demonstrate the substance can extend the life of creatures bigger than a mouse. But that hasn't slowed the resveratrol rage or claims by some manufacturers that they have captured the secret to long life in a capsule.

Resveratrol, a compound found in grape skins and red wine, is the most requested type of anti-aging product at the Vitamin Shoppe in Harvard Square.

"We have about seven different company brands," said assistant store manager Koudjo Ala. Most of the requests, he said, come from middle-agers who have "done a lot of research on it and they know exactly what they want."

"A lot of wellness counselors and homeopathic counselors are recommending it," he said. "I even had one doctor recommend it to one of his cardiovascular patients."

After his tantalizing 2003 announcement about resveratrol's apparent impact on yeast and fruit flies, Sinclair cofounded a private company, Sirtris, headquartered in Cambridge, that is researching resveratrol-based drugs designed to target genes called sirtuins. Sirtuins trigger enzymes that help repair and protect against cell damage. Sinclair's early research showed that sirtuins could be switched on by resveratrol.

Scientists have known for decades that rats on severely restricted diets lived longer and suffered fewer maladies of aging, such as heart disease and cancer. The caloric restriction appeared to stimulate sirtuin activity. So scientists have focused on finding a substance, such as resveratrol, that could trigger this same effect in humans - without the famine-like diet.

Yet even Sinclair - who declined through a Harvard spokesman to be interviewed for this story - issued a recent reality check on the resveratrol front. Interviewed on the CBS News program "60 Minutes," Sinclair said he believed it would be "five years, to be conservative" before the public would see a pill that could help people not only live longer, but keep them healthy longer.

"This will happen within our lifetimes," he said. "I'm fairly certain about that."

Other scientists without a financial stake in the resveratrol arena are skeptical that a proven anti-aging product will be available anytime soon. For starters, they say, it is easier to prove that a product is treating a specific disease, such as diabetes, than it is to show - in a measurable way - that one is retarding the aging process.

"It will be 30 years before we know whether resveratrol is actually working on aging - to change the rate at which people age," said Steve Austad, a professor of cellular and structural biology at the University of Texas and the deputy scientific director at the American Federation for Aging Research.

But Austad said he believes that resveratrol's benefits for treating certain diseases may be established more quickly. Sinclair's company, for instance, recently reported a lowering of blood sugar levels in diabetic patients treated with a resveratrol-like substance in early clinical trials.

Most resveratrol products range in strength from 10mg to over 200mg per tablet or capsule - 5 to 100 times the amount in a 5-ounce glass of dark red wine - and with nearly as many different sellers' instructions for suggested dosage. Prices also vary widely, from $10 to nearly $40 a bottle.

Yet consumers can't be really sure what they're getting when they buy resveratrol products. Unlike pharmaceuticals, dietary supplements, such as resveratrol, are not required by federal regulators to pass stringent safety and efficacy tests. That also means there is no independent assurance that what's listed on the label is actually in the bottle. A 1994 law requires only that supplements not claim to cure or treat any specific disease.

While the jury is still out on resveratrol, the consumer excitement it has generated has created interest in epigenetics, which is research on a wide variety of substances, including dietary supplements, that can trigger gene activity and perhaps affect diseases and aging.

The resveratrol phenomenon has created a "parallel interest in other substances, such as curcumin," said Douglas MacKay, a licensed naturopathic doctor in New Hampshire and vice president of scientific and regulatory affairs at the Council for Responsible Nutrition, a trade association of the dietary supplement manufacturers.

Curcumin is the main ingredient of turmeric, a bright yellow spice used in curry that has shown powerful anti-inflammatory and antioxidant properties in lab and animal studies. Preliminary human studies have indicated potential for use of curcumin in managing high cholesterol and heartburn, but more research is needed.

The 36-year-old MacKay, a cycling and surfing enthusiast, takes curcumin. He doesn't take resveratrol because, he said, the research hasn't yet proved that it can slow aging in humans.

But even some skeptics say they believe science eventually will figure out how to turn back the biological clock.

Austad, the University of Texas biologist, placed a $300 bet in 2001 with University of Illinois demographer Jay Olshansky that there will be at least one spry 150-year-old person alive by the year 2150. Olshansky bet against that. Each put $150 into a blind trust, with the understanding that the descendants of the winner would inherit the riches.