He walks the world, talks AIDS with teens 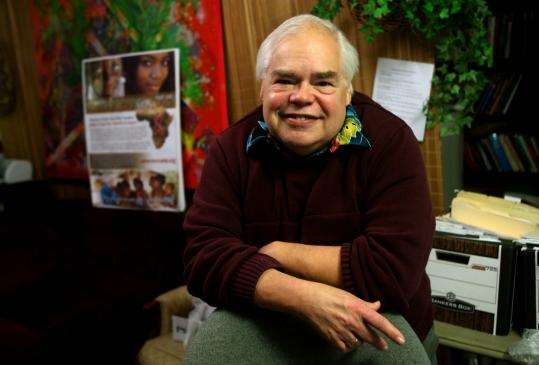 John Chittick was lecturing at the Harvard School of Public Health in the mid-90s when he realized classroom teaching was not his future. (Joanne Rathe/Globe Staff)
By Billy Baker Globe Correspondent / November 3, 2008
Text size – +

John Chittick is short and round and Hawaiian shirts are his standard attire. The four Fitchburg State College students who work as interns in the basement of his house point this out because, they say, it is precisely this nonthreatening manner that allows him to do what he does: approach teens on the street to talk about HIV.

"A lot of cultures don't want you on the streets talking about sex to kids," Chittick said. "That's what I do."

He runs a nonprofit organization called TeenAIDS-PeerCorps, its objective is to teach teenagers the facts about HIV and AIDS. Chittick's work takes him to some of the poorest and most dangerous countries in the world, remote locales where high HIV rates and poor prevention education go hand-in-hand.

He started a decade ago with a two-year round-the-world trip, and now makes one major international trip each year. So far he's covered 80 countries.

In two weeks, he'll set off on what may be his most dangerous mission to date - to the Sudan (including Darfur); Rwanda; the Democratic Republic of Congo; and Angola.

For a month, the 60-year-old will walk through their streets and refugee camps to execute what he calls his "AIDS attacks." He'll approach teenagers, hand them a business card with information on HIV written in their native language, and then deliver his hook. "This info here could possibly save your best friend's life," he'll say, through a translator, in a refined tactic to pull them in. "Do you want to hear it?"

His message does not always go over smoothly. He's been arrested in Cuba, detained in Kenya, and has had his business cards confiscated in China. But his tourist-in-a-Hawaiian-shirt disguise has helped him speak with an estimated 300,000 kids on the streets of the world. He hopes to add another 10,000 on his upcoming trip.

"They say you can't judge a book by its cover," said Barry Ansin, who founded Common Sensitivity, a central Massachusetts organization that worked on HIV and AIDS education. "But the cover has everything to do with your interest in reading the first page. His unique look and style gives him an opportunity, but that would be short-lived if he didn't then have the substance to back it up. He gets teens to really respond by treating them in an intelligent manor. He gives them the facts and allows them to make their decisions."

Chittick first became aware of AIDS in the 1980s when he owned an art gallery in Beacon Hill and saw this "mysterious disease that nobody understood" wreaking havoc on many young artists. When one of his business partners tearfully told him that he'd acquired the virus, Chittick understood so little about how HIV was spread that he was afraid to give him a hug.

Chittick sold his business, went back to school at Harvard to work on a model for HIV education, earned a master's and doctorate in education, and was lecturing at the Harvard School of Public Health in the mid-90s when he realized that his place was not in the classroom. It was, he realized, with teenagers. (He says he takes little pride in the fact that his Harvard thesis argued, correctly, that HIV would soon become a big problem for the young.)

In 1997, he launched TeenAIDS, created what he says was the Web's first site for teens and HIV, teenaids.org, and started his "World Walks." He operates on a shoestring budget from private donations, and has avoided government funding because he doesn't "want any strings attached." (He shakes his head at the Bush administration's abstinence-only education.)

Every penny goes toward the mission, he says, which means he lives on the constant edge of financial disaster. He operates TeenAIDS out of his childhood home in Fitchburg, and the house, which was left to him by his parents, was scheduled to be foreclosed on the day before his next trip (thanks to the help of his board, an anonymous donor, and the Fidelity Bank of Fitchburg, he's been given a one-year reprieve).

He's able to laugh about his finances and most else, but the joviality disappears when he gets to why he's sacrificed all for his cause.

"I am certain," he said recently in his living room, just before he had to get on a conference call about the foreclosure, "that I'm saving lives, and I'm enabling kids to do the same.

"Every time I leave a kid, I look them in the eye and say: 'You're now a teacher. You have the ability to save lives. Go out and do it.' "

Hometown: Fitchburg, where he grew up.

Education: Bachelor's degree in government and history from Dartmouth in 1970; master's in visual studies from MIT in 1980; master's and EdD from Harvard, in 1989 and 1994, respectively.

Hobbies: "I do a lot of artwork. I do technical and abstract drawings. And I love Jazz," he said, referring to his yellow Labrador retriever.