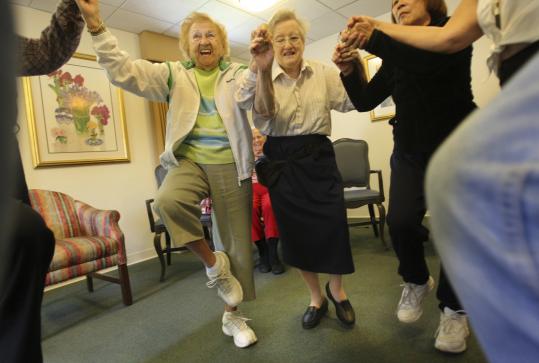 "We are going to play a fun little game, and it requires concentration," Patrice Flesch told her yoga students. Holding up her hands, she quickly extended and retracted her fingers. Her students repeated the motion.

When Flesch pressed her palms together and sat cross-legged, she asked, "Does anyone remember this pose?"

One student blurted out the answer: "The goddess pose!"

Words like "concentration," "focus," and "recall" figure highly into Flesch's class: yoga for the memory-challenged. Twice a month, Flesch tailors breathing and exercises for people with Alzheimer's, dementia, and other conditions involving memory loss.

Her thinking: By stretching the body, you relax the mind, which in turn makes it easier to concentrate and remember tasks at hand. The class also serves as a social gathering, providing a place to meet other patients, even if they may not remember one another.

Although variations of yoga have been used to relax the sick and frail, Flesch's holistic approach is unique. She treats her students in a way that lends them grace, dignity, and a sense of control over a disease that can often make them feel powerless.

"It's very grounding. It makes you pay attention, which relates to memory," said Flesch, a commercial photographer and yoga instructor for 35 years. "The yoga trains your mind to focus. Removing stress helps you be able to concentrate more."

Flesch owns South End Yoga studio, but her memory classes are held at the Rogerson House, an adult day care and residential facility in Jamaica Plain. Each class enrolls fewer than 10 people, most of whom are elderly.

Yoga has played a role in relaxation and gentle exercise for some people with Alzheimer's, according to the Alzheimer's Association Massachusetts/New Hampshire chapter. In some cases, a caregiver participates with the person. In others, people with early stage Alzheimer's continue their own practice of yoga.

A study released last year during the Alzheimer's Association's International Conference on the Prevention of Dementia in Washington, D.C., found that regular meditation can bolster cognitive function for people with memory loss.

Whether they meditate alone or in a yoga class, patients will reap benefits, said Dr. Paula Raia, director of patient care and family support at the Alzheimer's Association's local chapter. As Alzheimer's and dementia ravage the brain, sufferers can become agitated and prone to anxiety. Gradually they experience a loss of memory, intellect, and social skills. Their grip on reality progressively slips away.

"The yoga could help the person remain mobile for periods of time," Raia said. "That relaxation reaction, as a result of the mindfulness that the yoga promotes, will cause the person to sleep better, be less agitated and more calmer. It's also a social opportunity. They are getting opportunities to meet other people with Alzheimer's so they feel they are not alone. So it's killing several birds with one stone."

'You have the power'

Flesch began teaching these specialized classes 11 years ago after photographing Rogerson House seniors for promotional brochures. She believed that yoga might keep them active, both physically and mentally.

"I thought, 'Wouldn't it be interesting to try and work with Alzheimer's,' " she recalled. "I went online to research it, and there was absolutely nothing. That made me want to do it even more."

Flesch alters poses and movements from her traditional yoga to make them more cognitive. She emphasizes hand movements, repetition, and chanting. At a recent class, eight people - two in wheelchairs - sat in a circle as soothing music played. Lanky and barefoot, Flesch led the class in a series of poses.

Like a patient schoolteacher, she cheerily nudged the students to stretch their fingers wide and make a fist. "This pumps blood into the wrists and gets your circulation going," she explained. "We are all following a sequence."

The class performed a gamut of exercises. They rotated their wrists and looped their arms like backstrokes. They also stretched their legs while rotating their ankles. All smiles, the students eagerly followed along.

Near the end of the class, the group executed the yoga warrior pose. They lunged forward, hands pointed skyward.

"Get in touch with all that strength and power inside you!" Flesch roared. "You have the power! You have the courage! You are in control!"

Her students repeated her mantras. Sister Brigid Courtney, 64, was one of them.

"It's very good to relax and be totally focused on what you are doing," said Courtney, a member of the Sisters of the Episcopalian Society of St. Margaret's Convent in Roxbury.

Like some of her yoga classmates, her memory loss began with everyday things. She misplaced keys in her bedroom. She tried to brew coffee in the laundry room instead of the kitchen. She forgot why she visited certain rooms in her convent.

"It's kind of nerve-wracking and frustrating. It takes so long to put yourself together," said Courtney, her house keys attached to a wristband key chain so she won't lose them.

"I may put something down and not remember where I put it. Sometimes I can't get the right word out of my mouth. I will mix up letters."

Courtney said yoga has given her some solace. "It keeps you in touch with your body," she said during stretches. "It's a refreshing thing."