Environmental cues affect how much you eat 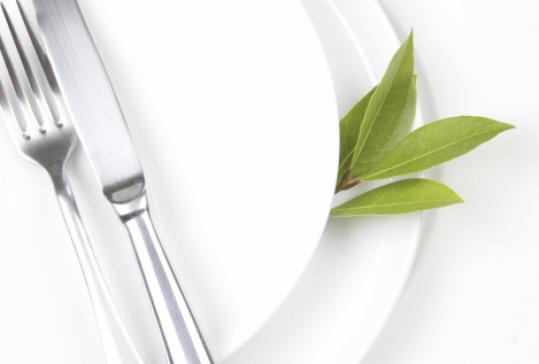 The same portion looks bigger on a salad plate than on a dinner plate.
By Judy Foreman August 18, 2008
Text size – +

Next time you sit down to dinner, dim the lights - but not too much. Both bright light and dim light may make you eat more. Watch the background music, too. If it's too fast, you'll eat fast, and therefore more; too slow and you'll keep eating. And think small for plates - a portion that looks skimpy on a dinner plate looks ample on a salad plate.

The more that researchers study obesity, the more they are finding that portion control is key to successful weight loss. Often, people think they're eating much less than really are. And these perceptions can be influenced, often outside our conscious awareness, by environmental cues, including lights and music.

There is no question that portion sizes have increased in recent years. Marion Nestle, a professor of nutrition, food studies and public health at New York University, and her colleague Lisa Young, have found that most portion sizes are now two or three times bigger than "serving" sizes, as defined by the US Department of Agriculture and the Food and Drug Administration.

That wouldn't be so bad, said, except that research shows that "nobody has any self-control. Everyone, everyone, when presented with larger size portions will automatically eat more calories." Even dietitians wildly underestimate the number of calories in typical restaurant meals, she said.

"Most people, unless they are anorexic, really don't have any idea of how many calories they are eating, and the food companies promote this," said Tufts University psychologist Robin Kanarek. "If you have a small bag of chips, you think it's a serving. But it's actually two or two and a half servings. Most people get fooled."

Whether it's because we've been taught to finish our plates or get our money's worth in restaurants, most of us eat everything that's put in front of us, according to surveys by the American Institute for Cancer Research. In 2000, the group found that 67 percent of us finish our restaurant entrees all or most of the time. In 2003, it found that for 72 percent of us, the amount we eat is determined by the amount we are used to eating or the amount we are served "without any attention to hunger, taste, or any other factor," said the group's nutritionist, Karen Collins, in an e-mail.

Brian Wansink, who directs the Cornell University Food and Brand Lab, has been a leader in the study of the cues that make us eat too much. In one famous study, he found that people given huge buckets of popcorn at the movies ate an average of 173 more calories than those given smaller containers even though, in both conditions, the popcorn tasted awful because it was five days old.

In other studies, Wansink, who is also executive director of the Center for Nutrition Policy and Promotion at the US Department of Agriculture, has rigged a "bottomless" soup bowl that keeps refilling itself as people eat, prompting people to eat 73 percent more soup. He has also shown that variety on the plate makes people eat more. When people were offered six different jelly bean flavors in a scrambled, disorganized array (lots of visual variety), they ate twice as many jelly beans as when the jelly beans were in an arrangement organized by color.

Wansink's research also demonstrated the tricky effects of lighting and music on eating.

"The big danger," said Wansink, "is that we all think we are too smart to be influenced by environmental cues.

"The good news is that it is very easy to reverse these cues and to just as mindlessly eat less." In fact, he said, most of us won't even notice if we eat 20 percent more or fewer calories than usual, though we will notice a change of 30 percent.

So, if restaurateurs and food marketers can use environmental cues to get us to eat (and buy) more, we can use the same psychology to take back our waistlines.

At home, for instance, put your dinner on a small plate and pay attention to the "serving" size. A serving of meat, fish, or poultry is about 3 ounces - or about half a can of tuna - but most of us have become accustomed to portion sizes of 8 ounces or more, according to a recent issue of the Tufts University Health & Nutrition Letter.

And serve food on individual plates rather than passing a platter at the table so as not to be tempted into second helpings.

At a restaurant, have two appetizers instead of an appetizer and an entree. Take home the leftovers for a second meal. Or split a meal with someone else. Order two veggies instead of a veggie and a starch.

Ask for salad dressing on the side, ditto for mayonnaise for a sandwich. Don't waste calories on drinks, except - if you want - for a nice glass of wine. Don't let music and lighting seduce you into eating more.

And watch out for the mind games you can play on yourself: Since you'll probably underestimate the calories even in a "healthy" main course, don't fall into the trap of thinking you deserve a rich dessert because you've been so good.