THIS STORY HAS BEEN FORMATTED FOR EASY PRINTING
PROFILE

You may think you know Ted Kennedy after 40 years in the Senate and enough speeches to fill the Library of Congress. But you haven't seen him play fetch with the inspiration for his new children's book. 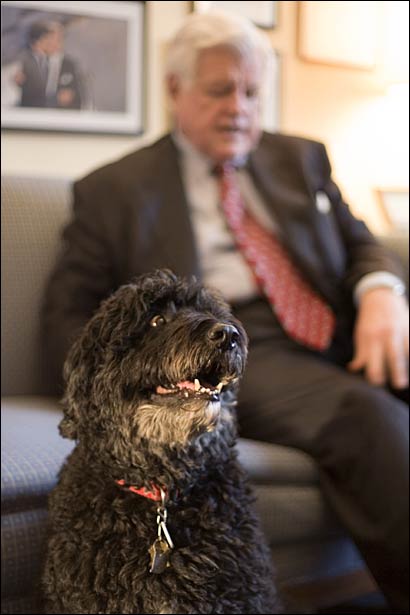 Click the play button below to hear Senator Edward M. Kennedy read from "My Senator and Me," purportedly written by his dog Splash

Follow the senior senator from Massachusetts, known for beating up tobacco lobbyists and conservative Supreme Court nominees, into his Capitol Hill office - the inner office, the one decorated with a framed, handwritten note from John F. Kennedy as a child, with pictures of Edward M. Kennedy standing alongside Martin Luther King and past presidents - and he quickly morphs into 8-year-old Teddy Kennedy. "Do you know how much I missed you? Do you KNOW how much I missed you?" Kennedy coos at Splash, his Portuguese water dog who has been awaiting his owner's return from a Senate committee hearing. Kennedy bounces a tennis ball, sending the large, curly-haired canine running around the bustling office before settling comfortably next to the senator. Kennedy (and Splash) sit down to discuss not the Iraq war, election politics, or health care initiatives, but rather his new 56-page children's book, My Senator and Me: A Dog's-Eye View Of Washington, D.C., due out this month from Scholastic.

I hope you weren't thinking this was going to be an easy interview because it's about your dog. So let's start with the tough question: Isn't it true you stole Splash from your wife?
That's unfair. But probably true.

He was, originally, a gift for Mrs. Vicki Kennedy. Where did you get him?
I had dogs all my life, but Patrick [Kennedy's son, now a congressman from Rhode Island] is a chronic asthmatic. He's allergic to everything. We looked at this kind of dog, because he's non-allergic. I looked at the small dogs, the puppies, and the breeder said, "Let me show you what the dog will look like when he grows up." I knew, once we went out to take a look at Splash [named by a previous owner], it was going to be all over. He said Splash wasn't for sale, but I agreed to take care of him when they weren't breeding him, so he said, "You've got a deal." Four months later, they decided they weren't going to breed him.

Then you started taking Splash to the office. How did you square that with Mrs. Kennedy?
Well, Vicki thought I was taking Splash away, and she wanted to have a dog, so we got Sunny, one of Splash's great-nieces. Then Vicki said, "We don't want them separated. They'll get lonely." So I bring both of them in. [Sunny was not in the office the day of this interview.]

What made you decide to write a children's book?
Do you want to see a trick?

The idea for the book?
Oh, he came back. You're such a good dog. Thank you, Splash. I read over at the Robert Brent Museum Magnet Elementary School [in Washington, D.C.] once a week, and I noticed there were few books available to read to the children. I saw that the children love books about animals, and we had some funny stories about Splash, so I thought, let's do a book about it. To be honest about it, when I finished it, I thought that was the first chapter, but they said no, that's the whole book. Then I got the illustrator [Caldecott Medal winner David Small] and I read it to my grandchildren.

And?
They thought it was ho-hum. They were interested, but not enormously excited about it. Then one of them said, "Why don't you have the story told by Splash?" Vicki stayed up until 11 o'clock at night and rewrote the whole story, from Splash's point of view. That's why I dedicated the book to her.

Is there anywhere Splash can't go?
The Senate floor. He is a little upset about it. [He opens a copy of the book.] "I know the rules, no dogs allowed on the Senate floor. But I don't like it. I see plenty of senators, and they don't behave any better than I do."

But he's seen some famous people and places.
He's met Elton John. He was in the Oval Office. He has a dog bone from President Bush. He gave me this rawhide dog bone and wrote on it, "From Barney to Splash." I take him to all the hearings; he always sits under the table. He goes to press conferences, to the Cape. He loves to take long trips in the boat. He could sail all day.

Doesn't he get to be something of a distraction?
Not really. [Splash barks and tries to retrieve a tennis ball from under the couch.] But one time [during a committee hearing] we had a roll call, and when we came back, Splash was sitting in the chairman's chair.

How does he behave around other senators?
One time, the caucus went on too long, and Joe Biden and Paul Wellstone were speaking louder and louder. Splash started to bark, so Paul Sarbanes made him an honorary member of our caucus.

What does Splash do when he sees the bomb-sniffing dogs?
He waits until we pass. And then he barks.

Susan Milligan covers politics from the Globe's Washington bureau. E-mail her at s_milligan@globe.com.