Director unearths a painful past 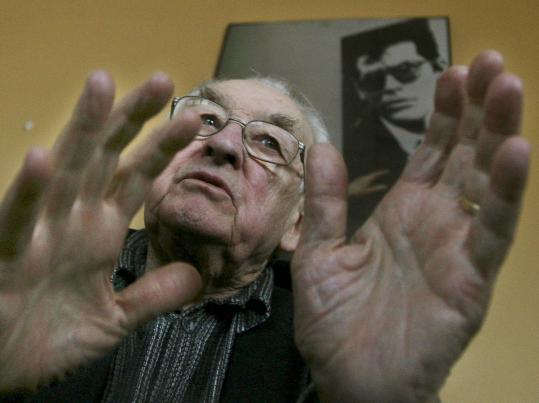 WARSAW - In the chilling final scene of "Katyn," the new film from Oscar-winning director Andrzej Wajda, Soviet secret police methodically execute one Polish army officer after another in a dank cellar, washing away the blood with buckets of water in a calculated choreography more at home in a slaughterhouse.

For Wajda, filming the scene proved one of his greatest personal challenges. Not only because his own father suffered that fate in the notorious 1940 massacre - an episode so tragic that nearly seven decades later, its mention evokes painful remembrance - but because he knew that the surviving spouses and children of the nearly 22,000 Polish soldiers and citizens killed on the order of Josef Stalin would see their deaths gruesomely played out on the big screen.

"This was the most important thing to me - how to make the movie in a way that would not hurt them, how to make them accept this as the truth and to say, 'Yes, this is how it happened,' " the 81-year-old Wajda said in an interview.

He described "Katyn" as his most personal movie ever. What made it even more painful was the fact that his mother lived out her life holding out a vain hope that her husband, Lieutenant Jakub Wajda, may have survived, since his name never appeared on any official list of Polish soldiers killed in World War II.

"She nourished the illusion that he was alive somewhere and would come back from the war," Wajda said. "Until her death, she hoped he would be found."

Wajda said the story was meant not just to provide information about the massacre, but as a way to tell a story that involved his own family.

"I wanted to tell a story about something in my area of experience, about my father and my mother. It all happened in a time that I still remember," he said, speaking at the film school he founded in the Polish capital, where he had just finished giving a lesson to a group of young filmmakers.

The movie was released in Poland this fall, and has so far sold 3 million tickets in the country of 38 million people.

It is scheduled to make its international premiere at the annual Berlin film festival in February, and Wajda is hopeful it may be picked up for distribution in the United States and elsewhere.

But he acknowledged that the complicated historical context may prove esoteric to some foreign viewers.

The film opens in 1939, after Germany has invaded Poland from the West and the Red Army has moved in from the East, carving up the country on the lines laid down by the notorious Molotov-Ribbentrop pact between Hitler and Stalin.

Wajda depicts Poland's agony in the opening scene where, on a bridge, Poles fleeing the Nazis collide with their countrymen fleeing the Soviets.

It is symbolic, but based on actual events. So is another metaphorically charged scene that shows a Soviet soldier remove a Polish flag from a building, rip it apart, and use the white portion to wrap around his foot as a sock. The half that was red - the color of communism - is put back on the building. The message is clear: Poland is obliterated and the communists are in charge.

The flourish is typical Wajda.

"Those who know my films know that I make such symbolic scenes, that this is my specialty," said Wajda, who received an honorary Academy Award in 2000 in recognition of his works that maneuvered between a repressive communist government and an audience yearning for freedom.

The movie depicts not only the crimes carried out in the Katyn forest and elsewhere and the devastation of the families, but also what Wajda called the "Katyn lie."

His film traces the fate of the wives and a sister of fictional officers who struggle to learn the truth about their loved ones from the Soviets who controlled Poland during and after the war. The crimes are blamed on the Nazis. Another thread of the film details a young woman who erects a gravestone for her brother killed at Katyn; it is quickly destroyed by the Communist government.

Wajda, who was 13 when the war began, did not feature his father among the characters.

"It would have been hard for me to tell his story since I don't know what really happened," Wajda said of his father, whom he recalled as a dutiful officer.

His father taught him to draw, which inspired him to study fine arts before attending the Lodz film school, which launched a career that won him renown for films like "Ashes and Diamonds," "Canal," "Man of Marble," and "Man of Iron."

To him, Katyn is one of the most tragic war crimes in history and a topic he could not have tackled before communism collapsed in 1989, because Moscow refused to acknowledge it.

"I never thought I would live to the moment when Poland would be a free country," Wajda said. "I thought I would die in that system. It was so surprising and so extraordinary that I lived to see freedom."