Brandeis to auction off an Impressionist work 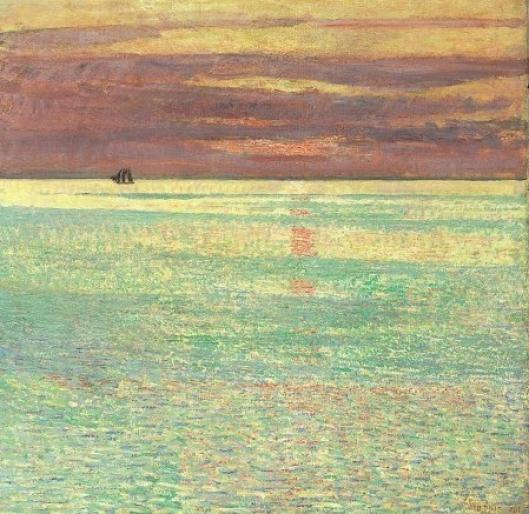 "Sunset at Sea" by Childe Hassam will be put up for sale this month. (CHRISTIE'S IMAGES LTD.)
Email|Print| Text size – + By Geoff Edgers Globe Staff / November 7, 2007

The Rose Art Museum is selling a prized painting by Impressionist artist Childe Hassam that will fetch an estimated $2 million to $3 million at an auction later this month. Such a sale would be the largest in the Brandeis University museum's history.

"Sunset at Sea," an oil defined by a red sky set against a shimmering green ocean, was painted in 1911 by the Dorchester-born Hassam and donated to the Rose in 1958. It has rarely been displayed at the museum.

Rose director Michael Rush said "Sunset" is being sold because the work does not fit into the museum's mission of collecting and showing modern and contemporary art.

Proceeds from the Christie's auction, which takes place Nov. 29, will be used to buy art in the future, Rush said.

"It's a magnificent painting, it really is," said Rush. "I'll miss it personally. But it has virtually no exhibition history at the Rose. It doesn't fit into our exhibition policy or our mission."

Hassam, who died in 1935, painted "Sunset at Sea" as one of a series of pictures inspired by his time visiting Appledore, an island off the coast of Maine and New Hampshire. The painting has been exhibited at many museums across the country; in 2004 it was featured in a Hassam show at the Metropolitan Museum of Art.

Taking art out of a museum collection, known as "deaccessioning," is generally frowned upon when money raised from such sales is used to balance operating budgets, or for building projects. But deaccessioning to make art purchases is considered acceptable in the museum world.

Rush said that the Rose spent close to a year on the process that has led to the Hassam auction to make sure the museum addressed concerns that could be raised by the sale. He said he received the go-ahead from the Brandeis University administration, Rose trustees, representatives from the family that donated the picture, and the American Association of Museum Directors.

In 1991 Brandeis sold a group of works for a total of $3.5 million, a move criticized by many because museum officials said the proceeds would be used for, in addition to future acquisitions, conservation and the museum's "educational role." This time, Rush said, proceeds will be used only for art purchases.

"I know [modern and contemporary art] is the primary mission of the Rose and they've done a great job with that," said Kizik, who prepared "Sunset at Sea" numerous times for exhibition elsewhere. "But to have the other end of the century take a hit like this, within a teaching collection, would be a noticeable loss to the community at large."

Joseph Ketner, who preceded Rush as the Rose director and is now chief curator at the Milwaukee Art Museum, said he agreed with the decision to auction "Sunset."

"It is an important painting, but what are you going to do with it?" he said. "If you're not going to use it, is it better off in a place it is used? How often did we use that painting? I never used it in eight years."

Geoff Edgers can be reached at gedgers@globe.com. For more on the arts, visit boston.com/ae/theater_arts/exhibitionist.